When in December 2015 this weblog reported the publication of d' Étonnants jardins en Nord-Pas de Calais, a book about art environments in France's northern regions Nord and Pas de Calais, a short mention was made of Jean Poteau's art environment, referred to in the book as Le Havre du pêcheur (The fisherman's refuge).

The following post has more about this modest art environment.

Jean Poteau (1947-2010) was the son of a mine-worker living in Rouvroy, a community some 40 km south of Lille in northern France.

When it came to choosing a future profession Poteau Sr advised his son not to become a miner, with which Jean Poteau agreed and so he became a construction worker, specialized in form work and woodworking. He continued to live in Rouvroy and conducted his work especially in the Lille area.

In 1989, at age 42, Poteau added a pond with fish to the garden at the rear of the house in Rouvroy where he lived with his wife. 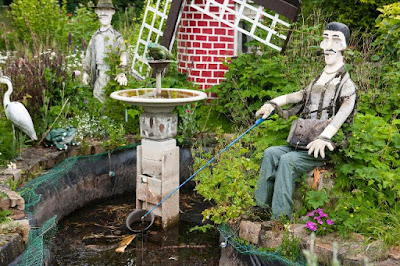 Some 8 years later, in 1997, he began transforming the already well-flowered garden into an art environment by adding a variety of single-handedly created decorative elements.

On the edge of the pond a fisherman got a place, as well as a heron, another person and a mill.

The windmill, with a build-up from red bricks and a roof covered with tiles, evokes the regional architecture of northern France. In winter it can give shelter to birds. A weather vane indicates the direction of the wind.

The bodies, arms and legs of he persons are made from all-purpose residual material, the faces were molded from self-made molds and the clothes and other attributes of the persons are dismissed items.

In addition to the heron which is part of the scene around the pond, Poteau has created a variety of other animals which got a place in the garden or around the house, such as dogs, ducks, frogs, and lions.

All these figurines were molded from cement in molds made by Poteau himself.

The fireplace/barbecue in the picture below has some animals made from gypsum (a cat, a dog and a rather small horse).

Poteau covered the walls with cobblestones, ballast from a nearby small railroad along which trash was transported. 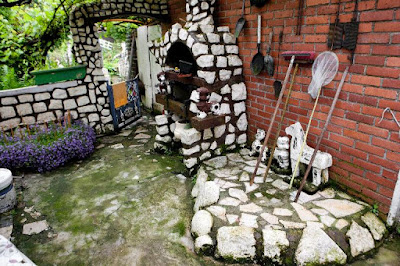 His wife (✝ 2012), who wanted to move to a smaller home, had to arrange that the rented house, the garden included, was returned to its original state and so Poteau's modest art environment was demolished, although some smaller, transportable items may have been included in private collections.