Pictured above is the front view of an art environment in Teguise, a town on Lanzarote, one of the Canary Islands in the Atlantic ocean across North Africa, which together form a region within Spain.

This art environment was created by José García Martín (1932-2019), also known as Pillipo or as Pillimpo).

The internet hasn't much biographic information about this artist. He was born in a poor family and as a young boy he wouldn't enjoy much schooling. He has been described as an illiterate, but wise man.

God has a special place in García's life. As quoted in weblog d'extrangis (February 2014), García said: Cuando vienes a este mundo, Dios nos ha dado ya todas las habilidades que debes tener en el camino. A mí me dio la imaginación, ya que no podía aprender esto en la escuela.  (When you come into this world, God already has given us all the skills you should have along the way. He gave me the imagination, since I could not learn this in school). 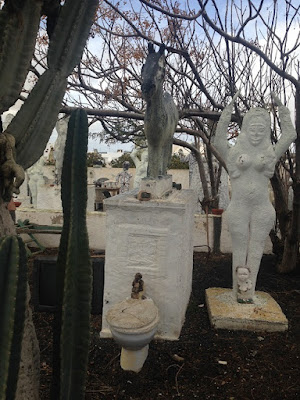 It is not clear when this happened, but at some moment in his life García began making sculptures, using clay, sand and water for the build-up and white plaster for the finishing.

The life-size sculptures mainly depict different types of people and various animals, such as a horse, lions, a fish... Although García was a deeply religious man, and there is sculpture of an angel, the majority of the sculptures have no specific religious character. However, on the rear part of the garden several crosses are installed, which may primarily reflect death, but also may have a religious significance. 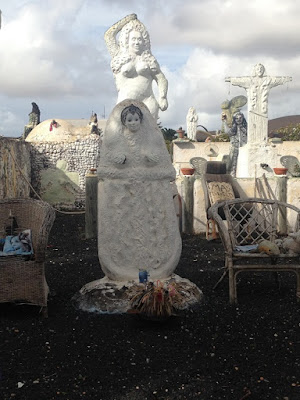 On the pictures in this post the sculptures mostly appear in white, but this could change over time because García liked to color the sculptures again and again, with light green as one of his favorite colors. When he died, in the spring of 2019, all sculptures where white colored. 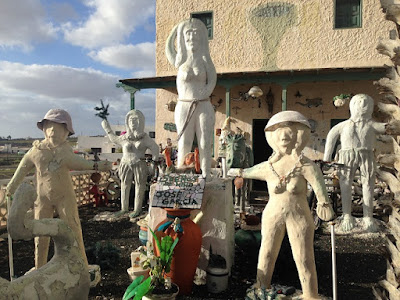 In general the site has the character of a sculpture garden, although it is supplemented with bric-a-brac, such as dolls, TV-sets. old furniture, music instruments, so to speak all things people discard at any given time.... Perhaps a reflection of the relative value of earthly goods. 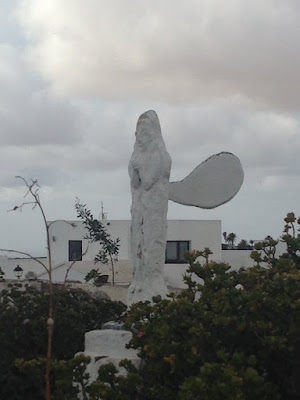 Located on the corner of two streets, the site not only extends along the main street, but also for tens of meters along the side road. So it's a garden with rather large dimensions in relation to the relatively modest living house.. By means of small walls, often decorated with frescoes or mosaic, the garden is divided into various compartments. 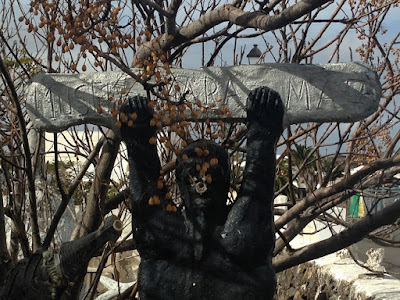 The site has been denoted by various names, such as Museo Mara Mao, an indication on a sign held aloft by a black painted sculpture that probably depicts the devil. Another sculpture holds the sign Museo Pillipo and an inscription at the entrance gate reads El Paraiso del recuerdo (Paradise of memories).

Seen from the street the left side of the garden borders a large area where on Sundays a touristic market takes place. García's art environment attracts a lot of interest of the tourists and websites such as Trip Advisor have published their pictures and remarks. García occasionally was available.to talk with tourists, but in general he preferred to be on his own, not welcoming visitors to his garden.

After the death of García on May 11, 2019 the site remained as it was. Currently (September 2019) it is not clear whether there are heirs and what the future of the site will be. 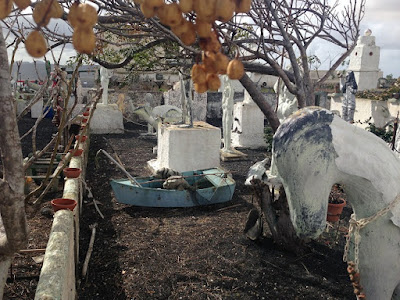 By chance Spanish filmmaker David Delgado San Gines got to know García's art environment. He became inspired to make a movie about the site and the dreams of it's creator. García, who meanwhile was in his early eighties, agreed to cooperate and in 2014 the film was shot.

On the Festival's website the synopsis reads: On the island of Lanzarote, a wise and unlettered man has built, to offer it to the world, a strange garden, where has given shape to the disturbing images of his dreams. It is Pillipos planet, a world ordered with images and visions, where angels scamper in the wind with God.

A weblog by Delgado regarding the film comprises facts and reflections about the art environment and its creator. 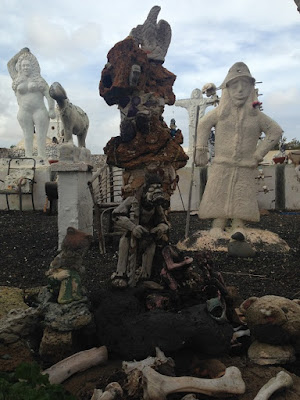 In the summer of 2019, from June 21 until September 15, the International Museum of Contemporary Art MIAC in Arrecife, Lanzarote, had an exposition entitled La posibilidad de un museo, with works from various artists, among whom García (the first presentation of his work in a museum)

José García Martín
Jardin de esculturas
Calle José Betancort
35530 Teguise, Lanzarote, Canarias, Spian
can be seen from the road
on the outskirts of the town, along the road towards Yaiza,
close to the petrol station
streetview
Posted by henk van es at 9:56 PM