In the Sierra del Ferriol, some ten kilometers north of Elche (Alicante province in the south-east of Spain), a quarry has been transformed into an art environment, a creation by Mariano Ros Martinez (1926-2017). 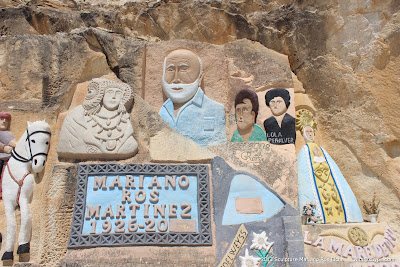 Already as a young boy Mariano Ros, the one with the beard in above picture, loved to wander in the mountains, like he also herded goats in the mountainous area around Orihuela, a city in the Alicante area.

Later, settled in the neighbouring city of Elche as a shoemaker, his love of nature and the outdoors manifested itself in hiking, mountaineering and travelling to destinations such as Mount Kenya, the Kilimanjaro and the Mont Blanc. With a group of friends he founded the Union Excursionista de Elche. 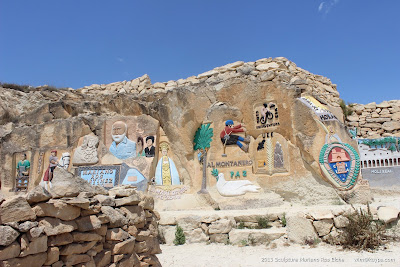 In his mid seventies, around 2000, Ros began sculpting the rocks in Castellar, a location in the Sierra del Tabayá in the neighbourhood of Elche. He had no education in sculpting at all and maybe he was inspired to make sculptures when somehow he carved some rocks when outdoors.

Anyhow, carving stones earned him an amazing experience. As he said in an interview: Estaba ya drogada con las piedras (I became almost stoned by the stones).

Ros' choice of the location in Castellar was not very appropriate, since it was a protected, archaeological significant area and after he had made a number of sculptures the authorities ordered him to stop this activity. 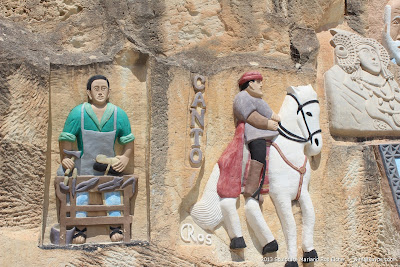 Ros was not discouraged and in 2004 he shifted his worksite to another area, an abandoned stone quarry in the Sierra del Ferriol, a site that over the years grew into a popular art environment with some seventy creations.

Different from Ros' first spot, the stones at the quarry are rather soft and easier to carve. Ros also decided to color the carvings and in this way the depictions acquire the character of high relief frescoes.

Most creations have been made in the upright rock wall and have a vertical or rearwards inclined position. The site also has some (more or less) horizontally situated works, such as a crawling crocodile, a plane, birds, a discobolus and two ladies. 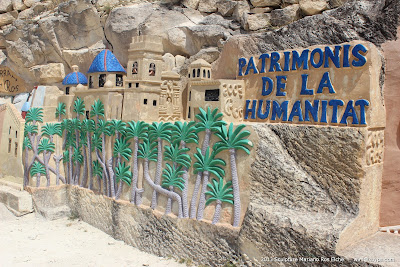 All creations in conjunction form a tribute to the city of Elche. As Ros said in the interview already referred to: Yo a Elche la admiro, la quiero (Elche, I admire her, I love her).

There are scenes, as pictured above, which depict the city as a world heritage with its palm trees which have a protected and UNESCO heritage status indeed.  But there are also many scenes that depict daily life in the city, former crafts, local monuments or outdoor activities such as mountaineering.

The videos in the documentation below give a good impression of the various scenes depicted in this art environment. 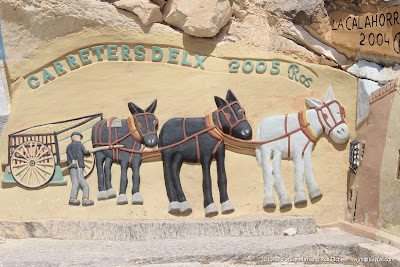 In addition to the rock sculptures the site also includes caves equipped with tables and chairs, and the site also has some built constructions, such as a pyramid with a globe on top.

In making this art environment Mariano Ros was assisted by some friends, among whom Candide Escribano and José Perez Alcaréz, who for example kept the site clean and planted and watered palm trees. 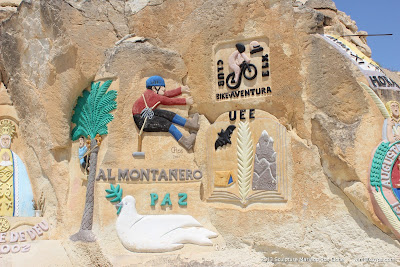 In 2008 the authorities once more ordered Ros to stop and refrain from further enlargement of the site, which at that moment included some seventy creations. Ros, who meanwhile was 82 years old, did not oppose this decision, realizing that he did not own the land and that he already was advanced in years.
Mariano Ros Martinez died on April 24, 2017

The art environment such as formed until 2008, has continued to exist and has become a local landmark.
Situation in 2021 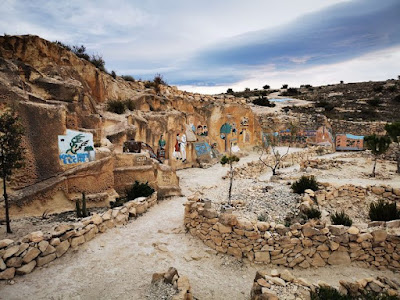 The picture above, made in December 2021 by Tiramisu Bootfighter, who traveled through Spain in the context of his project La Valise, Galerie Ambulante, shows that the site at that time still was in good condition. It is maintained by Candide Escribano, a friend of Ros..
Documentation
* Interview with Ros (2011) in weblog Aventur-arte-la revista
* Article (July 2013) in Wim Kuyps' weblog about Hondón de las Nieves, with a series of pictures of the site