The Dutch text on the portal reads:

which is to say in English, that this planetarium in the Achterhoek is available for all your cosmic observations.

The Achterhoek is a centuries old area east of the Oude IJssel river in the Netherlands. Although in the 20th century industrialization took place (textile industry), the region has kept much of its original rural character shaped by centuries of small-scale agriculture and administration by the nobility.

Henk Olthof (1938-2010), a carpenter, mason and contractor, had a house in the outlying area of the small community of Toldijk.

In his early 30s, in 1972, in a very special way he began to give shape to his interest in astronomy by making astronomical instruments such as a telescope, by building structures such as large scale planetariums and a bell tower and by creating installations, such as a sundial.

All built creations got a place in the backyard of the house.

Among the three planetariums built by Olthof, one is inspired by Eise Eisinga's planetarium in Franeker, Friesland, created between 1774 and 1781. Olthof could use Eisinga's calculations in order to construct the gear wheels, but in Eisinga's time Uranus, Neptune and Pluto hadn't been discovered, so for these celestial bodies (Pluto formally isn't a planet any more) Olthof had to make his own calculations.

Another planetarium shows the sky as it can be seen in the southern hemisphere. In this building the audience -a limited number of people of course- can see the stars in motion. One can also see a solar eclipse and a projection of Jupiter with its four moons, first seen by Galileo in 1610 and a proof that Copernicus was right when he said that not the earth but the sun is the center of our universe.

Then there is a planetarium/stellarium with a diameter of 5 meters and a spherical roof on which some 2844 stars of the northern and southern hemisphere can be projected. Since the sphere can turn, once in action it demonstrates how the stars apparently rotate around the polar star.

In the 1990s Olthof began making replicas of famous buildings, all in scale 1:60 and all exhibiting a good resemblance with the original. 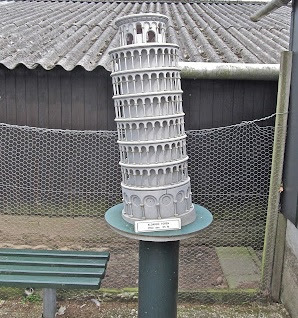 On the pictures above one can also see a replica of the Euro mast (added 1995), a tower erected in 1960 in Rotterdam, Netherlands, on the occasion of the horticultural exposition Floriade.

As in so many art environments in Europe, the Eiffel Tower, Paris (added 1992) is also present. Some 5,3 m high it is one of the first added replicas.

A special feature of the construction implies that the tower can tilt over one side, which is useful in terms of maintenance. The video by Carien Stemerding (1'04', YouTube, March 2012) shows how it works:

Other replicas include the CN Tower in Toronto, Canada, built in 1976 on behalf of the Canadian National Railway (added 1993, 9 m high, on the still of the video above) and the Spaceship Earth, a building in Orlando, USA at the entrance of Disney World (added 2005, 0,9 m high).

Olthof died in 2010. When in 1972 he began creating the site, this was just for his own pleasure, but after some time he noted that other people showed interest in what he was making, so in 1982 he decided to open the Achterhoeks Planetarium as he named the site, for the general public.

Consequently the Planetarium became a place which interested people and groups such as school classes liked to visit.

After Olthof had passed away, a group of friends of the site in consultation with the family has formed a foundation which keeps the maintenance of the site, while the site as such remains the property of the family

Currently, Achterhoeks Planetarium can be visited by groups on appointment and private persons can subscribe to participate in a public evening organized once a month (see website for detailed info)

Henk Olthof
Achterhoeks Planetarium
Hoogstraat 29
7227 NE Toldijk
Bronckhorst, Netherlands
streetview
group visits on appointment only
private persons can register for a tour/demonstration
which is organized once a month 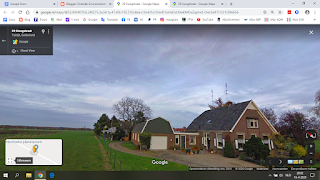