In Europe there are several ossuaries, with the catacombs in Paris, France as the largest and the one in Brno, Czech Republic, rediscovered in 2001, in second place in terms of size.

Most ossuaries have no artistic appearance, except those with arrangements made by for example placing a large number of skulls in a single setting.

But then the ossuary in Sedlec, Czech Republic. This one distinguishes itself by the creative presentation of the bones as provided in the 19th century by František Rint.

Rint was a woodcarver and carpenter who was commissioned by the aristocratic Schwarzenberg family to orderly arrange the huge amount of bones in and around the small Christian chapel in Sedlec. Rint has realized this project from 1867 to 1870 and he did not hesitate to give expression to his creative fantasy.

The showpiece of the site is an enormous chandelier (pictured above), that hangs from the center of the ceiling.

Another great piece of work is a copy of the Schwarzenberg family's coat of arms, whose original has stripes in silver and blue and features important happenings in the family's history such as the conquest in 1598 of a Turkish held fortress in Hungary named Raven (in the bottom right quarter one sees a raven picking the head of an opponent) 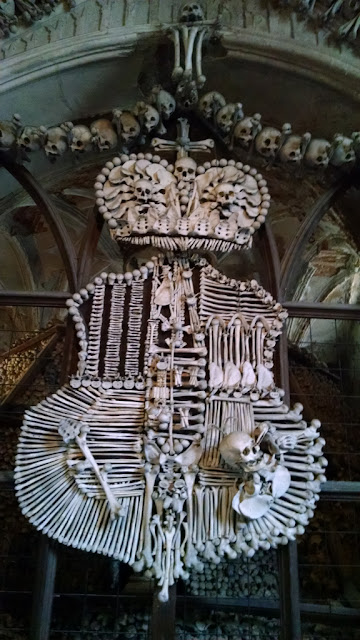 The walls and the ceilings have been adorned with geometrically arranged compositions of bones and skulls, as in the picture below. 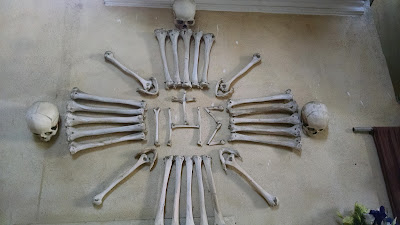 The internet has dozens of descriptions of the Sedlec Ossuary, usually with a touristic background or written from a curious places point of view, but there are no data available about the one who created the site, other than that he was a carpenter/woodcarver and was born in České Skalice.

Fortunately Rint left this information in a composition on a wall, made from bones of course. 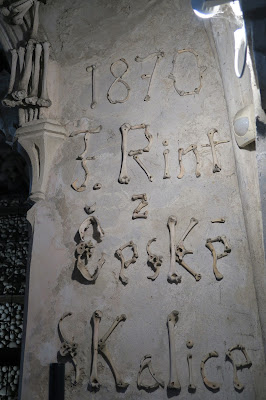 The ossuary is located underground, beneath a chapel which was part of a centuries old monastery that became property of the Schwarzenberg family. The cemetery of the monastery became a popular place to be buried when soil from the Holy Land was added to it, but most funerals were related to the thousands of deaths due to the pest epidemic in 1318 and the later Hussite war.

At the end of the 15th century the graveyard was closed and some 40.000 or more excavated bones were stored in and outside the chapel.

On the occasion of the centenary of the ossuary in 1970 filmmaker Jan Svankmajer made a 10' movie (in B/W). It became a hectic assembled, almost surrealistic composition with images of bones and skulls dubbed with the routinely voice of a tourist guide and jazzy music.

After the Prague Spring in 1968, the country was invaded by Warsaw pact troops and in the fall of 1969 a post-invasion communist regime was installed. The new authorities assumed subversion and forced the filmmaker to add another soundtrack, so piano music with a female singer was added (more about this here).

In February 2019 the website Atlas Obscura reported that the four large candelabras will be restored. A team of professionals will disassemble the compositions to give the bones a thorough cleansing.

* Informative website of the ossuary
* Series of pictures on Flickr
* Article (april 2015) by Jessica Straus in her weblog Quirk
Video
* YouTube has a lot of videos of the site. Here is a recent one (September 2014, 6'10"), shot by Glenn Campbell