Above short video, shot from a drone, gives an impression from above of the Castillo de Colomares, a singular architecture in Benalmádena, Spain, single-handedly constructed by a medical doctor assisted by two local masons.

Esteban Martín Martín (??-2001), the author of this creation, was born, spent his youth and studied medicine in Spain. He became a surgeon and at some moment he continued his medical career in the United States, where he also met his wife.

Many states in the USA celebrate Columbus' discovery of America in 1492 as Columbus Day, an official holiday on the second Monday in October. Martin observed that the festivities in particular paid attention to Columbus' Italian ancestry and neglected Spain's role in facilitating Columbus' voyage.

This went against his nationalist Spanish pride and he decided to take action to clarify Spain's role. In the early 1980s he began to study books on Columbus and the preparation of his discovery tour. The idea grew to create a monument in honor of the explorer and seafarer.

From 1970 on Martín already owned a piece of land in the hills above the community of Benalmádena where he wanted to build a house to live in after retirement.

What if the monument he had in mind would arise on this piece of land? Martín followed his passion, resigned from his job, remigrated to Spain and in 1987 on that piece of land he began building a monument for Columbus.

He probably went to work with a general idea of what the building would look like. And in the absence of detailed plans, it is not likely he applied for a building permit.

Anyhow, after a number of years an enormous edifice had emerged. A set of castle-like decorated facades and a variety of towers, some 33 meters (108 feet) high, on a floor plan of 1500 square meters (16146 square feet). And this was realized by just three men and in an incredible short time (1987-1994).

In 1994 Martín ended the further development of the project. His money was running out, the years of hard physical work took their toll and he probably also was disappointed by the low level of support he received for the bringing about of a monument for Columbus. He had, for example, unsuccessfully written a letter to the king of Spain with a request to support the project and the Monument wasn't included either in the festivities related with the 500th anniversary in 1992 of Columbus' expedition.

His son later said that his father, passionated as he was, could not understand that others would shrug their shoulders for a tribute to a great man in Spanish history.

Martín continued his study of books about Spanish history until his death in february 2001.

A book in stone

The Castillo de Colomares has been characterized as a book in stone.

Some parts are easily readable, such as the representations of  the ships of Columbus' small fleet and the referrals to King Ferdinand and Queen Isabella who regulated the financing of the expedition, but other parts demand more explanation, such as a Chinese pagoda that refers to Columbus' assumption that he had discovered a route to Asia.

At various places sculptures have been arranged, both stand alone ones and works in haut relief.

The castle also houses a chapel. With its surface of 1.96 m² it is the smallest church in the world.

And then, Martín had made provisions to ever host the remains of Columbus.The seafarer died in 1506 and was buried in Valladolid, Spain, but then the bones were relocated by relatives, followed by even more displacements, resulting in a lot of disagreement about the true whereabouts of Columbus' remains.

After Martín had passed away the site for some time was used as a falconry and a reptile center, but later his widow and children decided to open the Castle for visitors. So the grounds around the castle were fitted with walkways.

Since the site is situated in a busy touristic area along the Spanish coast, it became a popular touristic spot, promoted in various touristic websites. The family hopes that the revenue will help to cover the costs of the maintenance of the building.
Situation in 2021 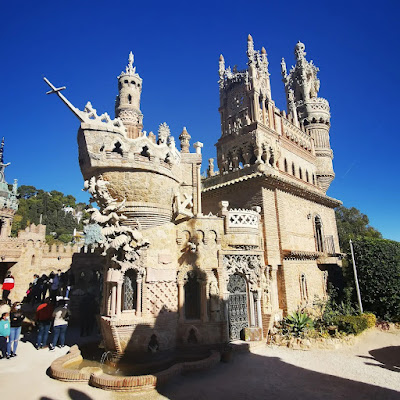 The picture above, made in November 2021 by Tiramisu Bootfighter, who traveled through Spain in the context of his project La Valise, Galerie Ambulante, shows that the site at that time still was in good condition.

Documentation
* Official website
* Article on website Eldiario (March 2015)
* Article on SPACES website
* Pieter and Rita van den Boogaart, "Colomares, a tribute to discovery", in: Facets of continental Europe, follywise (The Follies Journal, nr 16, 2017, p. 41-45)
* The internet has various videos of this art environment. Here is one from February 2016 by Right Spain (YouTube, 1'50")