¹
Located close to the Algama river in the small neighbourhood Creixell in the outskirts of the Catalonian community Borassá, this art environment with its extensive collection of replicas, has received virtually no publicity from Spanish authors.

There is small article in Catalan on the website of the Festa de l'Allioli de Creixell and Sergio Flaquer Carraras (Serflac) documented the site in a video (2014). But it was Jo Farb Hernández ¹ who actually reviewed this art environment in her book Singular Spaces (2013).

Josep Sala Prat was born around 1926 in a modest rural family. His father was a farmer who breeded and traded pigs. The young boy didn't enjoy much schooling, since he had to assist his father on the farm. He liked to make drawings, this to the dismay of his father who felt that the young boy could better spend his time at farm work.

Around 1936 Josep, at that time some ten years old, helped his father in constructing a new family home, a building he later would show in a replica in his art environment.

Sala fulfilled his military service in Morocco and once returned he married a girl from Borassá. The couple got two daughters.

At a given moment Sala succeeded his father as manager of the farm. Around 1970 he bought a piece of land where he built an oblong stone barn. Later he also built a wooden doghouse for his dog.

These building activities must have satisfied him, since he felt encouraged to continue making constructions, and around the end of the 1970's, in his late fifties, he started making replicas, an activity that ultimately resulted in a sizable collection of some fifty buildings and some thirty other creative elements.

Sala made replicas of buildings from his region, depicting the local church of Borrassá (picture above) and simple farm houses, such as his own house and El Pa Volado (the one in the first picture).

Sala's art environment indeed has a wide variety of replicas of (Spanish) castles. The largest one, located just at the entrance of the site, depicts the Castell de Requesens.

Like the original castle its levels climb a hill (picture below)

Other replicas depict famous buildings in other countries. The most impressive one is the replica of the famous Saint Basil's Cathedral on the Red Square in Moscow (pictures below), made by Sala on the basis of pictures in magazines.

As in the original, the replica has colorful onion-shaped domes. Sala used various materials to create these domes, like buttons, shells and parts of tiles.


Sala used cement to construct the replicas. This was the only material to which he spent money, all other materials he used in his creations were discarded objects, such as broken tiles, shells, buttons, pieces of iron and so on.

Sala liked to meet and have a drink or a meal with his friends, so the site has several places which are suitable for picnics.

And in 1985 Sala built a cabin (3x8 meters, pictured above) named Barraca de l'avi (grandpa's house), also very suitable to gather with friends. The video in the documentation shows a a hood above the fireplace inside that has been decorated with shells. 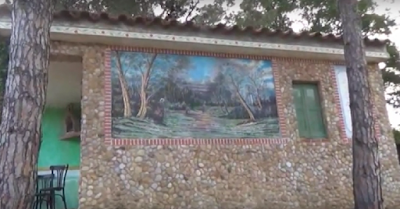 The picture above shows an outside wall of the cabin with a painting of a Catalan landscape, made in 1988 by Sala's friend Ramon Bretx, a painter who lives in Borrassá.

The family house Can del Fi, meaning "house at the end (of the road)", is also inhabited by Sala's daughter and her husband. It is situated somewhat away from the location of the Granja La Rivera art environment. Around this house Sala also has installed creations: some replicas but mainly decorative items.

When Jo Farb Hernández visited the site around 2010, Sala was already in his 80s and he was not as well able to take care of the daily maintenance of the site.

Meanwhile Sala's health has deteriorated. Serflac's video, made in 2014, shows that grass and bushes advance. It looks like this art environment is gradually falling into decay.

* Article (author and date of publication unknown) on the website of the Festa de l'Allioli de Creixell (with two b/w pictures of Sala posing near replica)
* The site got a scholarly review in: Jo Farb Hernandez, Singular Spaces. From the Eccentric to the Extraordinary in Spanish Art Environments, Seattle (Raw Vision, SPACES, San José State University), 2013. pp. 92-195 (abridged version on SPACES website)
Video
* Scenes of the site (2014) on the Provincia de Girona (Catalunya) trip video by Serflac (YouTube, starts at 11.26, cannot be embedded here)

note
¹ Since Jo Farb Hernández' review of the site is the most informative documentation available, I like to acknowledge that the factual data in this post are based upon Jo's research