Above singular architecture, a structure surrounded with enigmas which existed until 1991 in Saint-Lunaire, Brittany, France, was photographed in 1988 by Louis Motrot, a historian living in neighbouring Saint-Malo ¹.

Born in 1908 in the Breton town of Brest as daughter of a couple with five children that run a pub and traded in wine, Jeanne Devidal in 1926 moved to Paris where she went to work with the french national postal and telephone company.

In 1941, during world war II, she was reassigned to Boucé, a community some 200 km west of Paris in territory occupied by the Germans. She lived there with her older sister Leonie Devidal. It might be that she was part of a network of resistance fighters and that she intercepted messages. Just before the liberation of France most members of the cell were arrested and executed (the massacre of Riaux).

It is very likely that the two sisters because of this event did acquire a war trauma, but Jeanne Devidal would never talk about this period in her life. 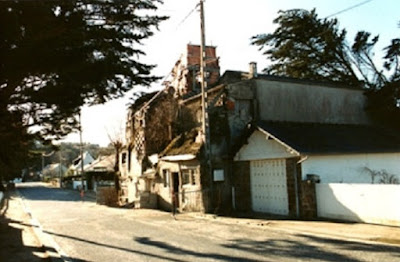 In 1947 together with her mother and sister (her father and two brothers had died) Jeanne settled in the community of Saint-Lunaire, where they opened a shop in haberdashery named Chez Jeannette.


She acquired a piece of land near the part of the beach known as Longchamp where she had a house built in the pavillion style as usual along this coast.

Jeanne Devidal now lived alone in the house in Saint-Lunaire.

It is unknown why, but in 1957 she began to transform the house into an art environment. It has been reported that she made decorations in a rather artistic way, creating bas reliefs with inlaid shells, making paintings and sculptures. However, to my knowledge, no pictures of the house's interior are available on the internet.

Apart from making decorations, Jeanne Devidal also began enlarging the house by adding new walls and annexes, whereby she not only used cement, but also a variety of unusual materials, such as shoes, crates, driftwood from the beach and boxes of sardines, producing a tangle of constructive elements, fenced windows, overhangs and motives, combined with miscellaneous stones, wooden elements, found objects and vegetation. The interior is a maze of galleries and rooms.

Inhabitants of Saint-Lunaire nicknamed Jeanne Devidal la folle de Saint-Lunaire (the silly lady of Saint-.Lunaire), but Agathe Oléron, who made a documentary film about her (first presented spring 2016) assesses this as unjustified: ".....(she) was an artist. She did not just build a strange house. She painted, drew, sculpted and wrote on the walls. She lived in her art".


Jeanne Devidal has been active in constructing and decorating exterior and interior of this singular architecture for some 35 years, often starting at 5 or 6 o'clock in the morning, always covered with a scarf, a hat or a hood.

As an explanation for her activities it has been suggested that she, haunted by delusions, sought protection behind the walls she built, but Agathe Oléron, who in preparing her film talked with many people who somehow have known Jeanne Devidal, thinks there is no single univocal statement available.

In the 1980's the site was visited by many tourists, often via buses of tour operators and local residents who considered this annoying, did not understand that the local authorities tolerated the unlicensed structure. The story went that Jeanne Devidal enjoyed protection by high ranking persons.

In 1987 the building withstood a severe storm, but during Christmas 1990 an observation tower collapsed, whereby Jeanne Devidal was hit. Firefighters found her among the rubble, fortunately only slightly injured. She was hospitalized and thereafter she went to live in a sheltered accommodation in Saint Briac. There she lived for seventeen years until she passed away in july 2008, almost a hundred years old.

Following a decision of the mayor, supported by a report on the status of the building in terms of security to the public, Jeanne Devidal's singular architecture was demolished in 1991. It was replaced by a conventional coastal pavilion.

In her first full length documentary film Agathe Oléron seeks to portray Jeanne Devidal and her singular architecture. In an interview she relates her experiences when as a young child she for the first time saw the house. She felt as if Jeanne Devidal had made a giant sand castle to protect herself and that the next wave would swallow up everything:"For me it was impossible to live in such a house, it was scary". 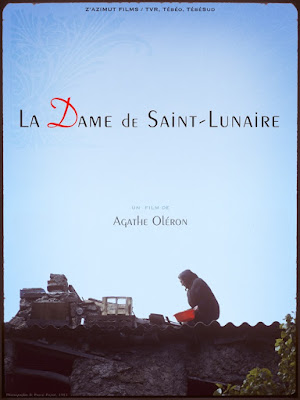 She relates that Jeanne Devidal was highly respected by the adults of the community: "Everyone has appropriated the character and each time it evoked in the people a happy memory, a mystery, something pleasant".

First presented on June 3, 2016 to the inhabitants of Saint-Lunaire, the film will circulate in France. Here is the trailer (1'16", You Tube, published October 2016)