Most self-taught artists who create an art environment made up of life-sized sculptures, will put these creations in their garden. But not so the artist presented in this post, whose creations stay indoors and appear to be part of the household.

Bogdan Ziętek (November 8, 1932 -May 28, 2018) was born in Tlukienka, a small village in the south of Poland, near Krakow. After World War II the family moved to the Lower Silezia area, where they settled in the community of Brzeźnica, where Ziętek lived for the rest of his ife.

As a young boy Ziętek only attended primary school. His parents couldn't afford further study and he had various jobs such as decorator and illustrator. The longest, some sixteen years, he worked at a mining company. He retired in 1991 at age 59. 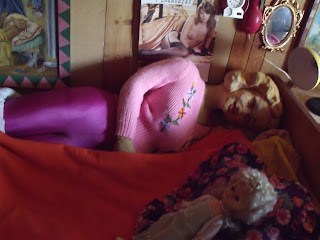 A man of various artistic talents, Ziętek was not only a self-taught sculptor, he also liked making music, writing poetic, mystic and philosophic texts, working as a photographer on weddings and other festivities and designing and sewing women's clothing.....

Already as a young man his artistic disposition went along with a sensitivity to beauty, which in his case involved in particular the appeal of beautiful women.

He made his first sculpture in 1960, a depiction of a woman he named Eva. It took him several months to complete the creation. In the ensuing years Ziętek would make many more sculptures, mainly of women. 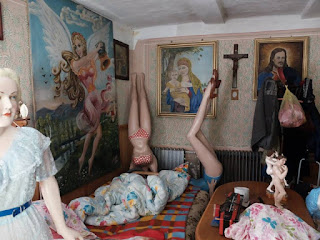 Ziętek has a specific emotional relationship with his wooden women, which he served well in terms of clothing, make up and hairstyle. In an interview (2005) he said: Piękne kobiety są jak rwący potok - zaszumią, rozkochują i odchodzą (Beautiful women are like a rushing stream - they rustle, surprise and go).

Partly due to the positive interest from museums and the press, his wife Agnes became accustomed to her husband's passion and accepted it. The wooden ladies were kind of members of the family and part of the household indeed.

The sculptures have been made of wood, usually a suitable part of a lime tree, which he roughly shaped with a chainsaw, adding details with chisel and knife. The creations were processed by prolonged sanding and finished by painting them in natural, realistic colors. The sculpted women were dressed with self-designed and self-made garments.

Besides sculptures Ziętek also made paintings and drawings

Around 2017 Ziętek lost a lot of his energy. He remained in bed during the day and his wife didn't allow anyone to visit him. He died May 28, 2018.

Ziętek's work has been featured in various solo and group exhibitions in Poland, such as the the Mazovian Museum in Plock and the Ethnographic Museum in Wroclaw (summer 2015)

In January and February 2016 a selection of his creations was exposed in the Pomeranian Gallery of Folk and Amateur Art KPCK in Bydgoszcz. A short video (see documentation) gives an impression of this presentation.

* Video made of the opening of the exposition in the Gallery of Folk and Amateur Art KPCK in Bydgoszcz (2'47", YouTube, uploaded January 2016)