Above pictured singular architecture is located in Mulyanka, a small community near the city of Perm in the Russian Federation.

Alexander Markelovich Ladogina (b 1951) in 2001 at age 50 began the construction of a building that might serve as a church for the community. He was a functionary at the Russian department of agriculture and it is unlikely that he had a professional architectural background. 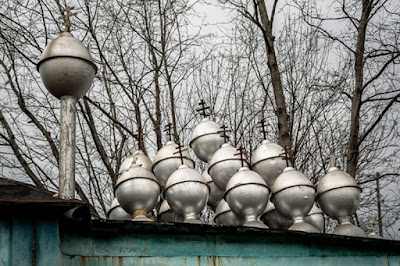 this picture and the next one from Berlogos website

The construction, which resembles a large barn, stands out as an art environment because of the specific decorations added to its roof. The some fifty spherical aluminium domes are composed of kind of lampshades which were used in agriculture in order to protect seedlings and promote their growth.

These domes are easy to associate with the onion-shaped domes featuring Russian Orthodox churches and cathedrals, and the crosses on top of the domes mark the religious character of the building. 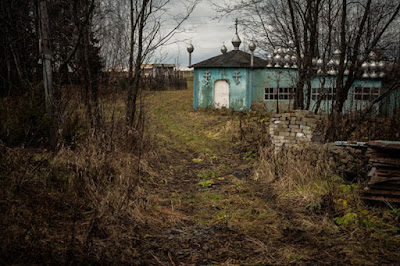 The church is located in a marshy area and although it was consecrated by a local priest and may have been used as a church indeed, currently it is more like a storage. As far as I understand nowadays a new church, built on a more elevated location, is available.

Ladogina is meanwhile in his sixties and retired.

In 2013 he was interviewed by telephone by the journalist Ivan Kozlov, who published his report on the Russian website Snob. And recently (May 2016) this art environment got some publicity in an article by art historian Alexandra Kushnarev on the Russian website Berlogos, which reports on worldwide developments in modern architecture and design.