Swalmen is a small community of some 9000 inhabitants in the province of Limburg, the Netherlands. It takes its name from the small river Swalm, which meanders from Germany to the river Meuse in Limburg. The community from old has its own dialect called Zjwaams (Swalms).

Zjwaamvallei is the name of an art environment in Swalmen, characterized by a large number of miniature structures. 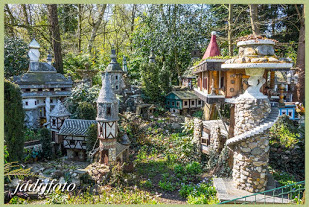 The creator of this art environment, Jan Janssen, was born in 1934 as son of a farmer living not far from Swalmen. After primary school he worked for sixteen years at an iron foundry and then became a construction worker.

When he married, the couple went to live on the western outskirts of Swalmen, then a wooded, verdant area, currently a part of the community adjacent to the newly constructed A73 motorway.

In 1967 Janssen began making miniature constructions he located in the rather large garden around his house, an activity he continued throughout his life.

Initially he made constructions of chipboard, but later he built with very small bricks he formed himself from clay and baked in a stone oven. The first video in the documentation shows his workshop with a stock of these small bricks.

In creating the structures, Janssen also used a variety of discarded objects, such as parts of carpet (applied as roofing), hubcaps, flower pots, rings of curtain rails, but also material collected in the area, such as cobblestones from the river Meuse.

The miniature buildings, which vary in height between 0,5 and 3,5 meters (1.6 - 11.4 ft), are not replicas of existing buildings but products of Janssen's fantasy. They exhibit different architectural styles, some have a modern look, but most structures exhibit a Limburgian or German architectural influence.

Placed together without a particular template, the over fifty miniature buildings include castles, mills, gates, bridges, stairs, and so on.

Janssen, currently (2020) in his eighties, doesn't make new creations anymore. His son assists him in maintaining the site.

Jan Janssen
Zjwaamvallei
Swalmen, Limburg, Netherlands
can partly be seen from the street
Posted by henk van es at 7:07 PM