The sculpture garden in above picture could be seen in the 1970s and 80s in Lutsk, a city with a history of over 900 years, located in northwestern Ukraine, along the river Styr.

About Stanislav Sartsevich (1904-1987), who created this sculpture garden, only just a few biographical details are available. He had a job as a teacher, was head of a post office and the longest time he was an accountant at the department of social security.

Maybe during his working life he already made folk art paintings, in any case once retired, probably around the late 1960s, he became active as a self-taught artist, mainly by passionately creating sculptures and to a lesser extent also by making paintings.


Sartsevich displayed his extensive production of sculptures in the front garden of his house which was located along a street in the old part of the town near Lubart's Castle, one of the oldest medieval fortifications in Europe.

His neighbours resented this use of the garden because in their view the grounds should be used to grow vegetables. They approached the local authorities who tried to restrain Sartsevich, but he diligently continued the development of his sculpture garden.

It became an extensive site with a variety of closely spaced sculptures made from cement and painted in appropriate colors. Ultimately the collection comprised mostly sculptures of people and animals. 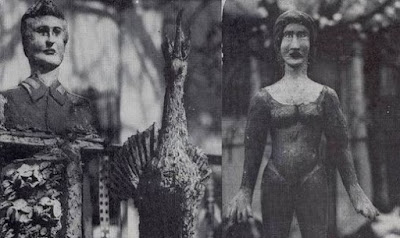 His life-sized sculptures of people are rather naturalistic and those depicting well dressed fashionable ladies wearing a hat, especially got some reputation.

But he also made a large number of sculptures of people from Lutsk, family members, friends, swimmers, partisans, military people, a winged angel ....

The pictures in this post just give a limited insight in the large number of personalities that populated the garden. 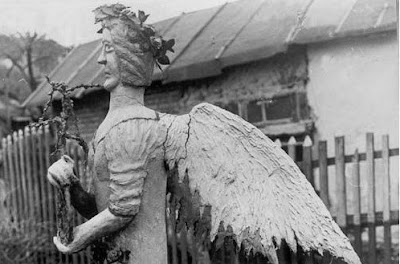 In general he modeled his sculptures without using an image of his subject, although when creating a Madonna he used an image of the Madonna in the Sistine Chapel in Rome.


Sartsevich's sculptures of animals depict lions, deer, giraffes, elephants, all kinds of birds, in short the animals one sees in a zoo, all mostly executed in a realistic way. 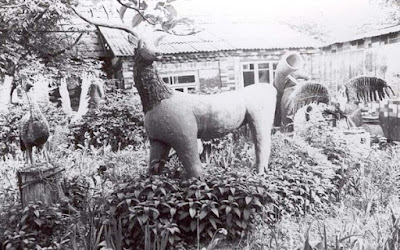 Sartsevich has received appreciation for his creative activities. For example: in 1979 he was invited to take part in an exposition of folk art in Lutsk.

He also got positive nationwide publicity when in 1982 art historian Oleksandr Naiden wrote a benevolent article about him, entitled Portrait of the artist at old age, in the Russian magazine Decorative art of the USSR nr 5.

However, after Sartsevich in 1987 had passed away, both the family and leading artistic circles in Lutsk did not attempt to maintain the garden. His art environment was demolished, as well as the house, which was replaced by a modern two-storey building

All that remains are the old photos and videos.

* The next video (10'38", You Tube, uploaded March 2014) has a compilation of some old videos of the sculpture garden and a slideshow of the various sculptures