Kate Bradbury, Sculptures in the interior

The pictures in this post show sculptures as displayed in the flat of the artist who created them....kind of an indoor art environment......

Around 2000 Kate Bradbury (b. 1961) worked in a sandwich shop and lived in a rented room in the basement of a house in the north of London. When she found Chinese paper, ink and all kind of objects and materials left by other tenants, as a self-taught artist she began making both black and white drawings on paper and sculptures/assemblages.

Her artworks were exposed in some small London galleries and probably at the 2005 Raw Art Festival in London she met Sue Kreitzman, who at that exposition for the first time showed her artwork

In the context of that festival Sue Kreitzman, along with several other female artists, got the idea to organize an exposition of works by female outsider artists. The idea was elaborated and so the exposition Wild Old Women (London, November 2008/January 2009) came about.

We are loud, we are raucous and we are thrillingly, vividly visible.

We are Outsider Artists so we do things exactly as we please.

Kate Bradbury was one of the participating artists and the website of the Wild Old Women exposition to my knowledge is the earliest internet publication that refers to her and her artwork.

In subsequent years more internet publications would appear. In April 2012 Kate Bradbury was artist of the month at Outside In, a national project founded in 2006, to provide a platform for artists in the U.K. who define themselves as facing barriers to the art world for reasons including health, disability, social circumstance or isolation.

In 2012 Kate Bradbury was also one of the six winners in a triennial competition for these artists, pursuant to which in 2013 she got a personal exhibition in the Pallant House Gallery, entitled Squalls and Murmurations  (November 5 - December 1). The title refers to two recurring elements in her work: loudness (of storms) and quietness (of murmuring). 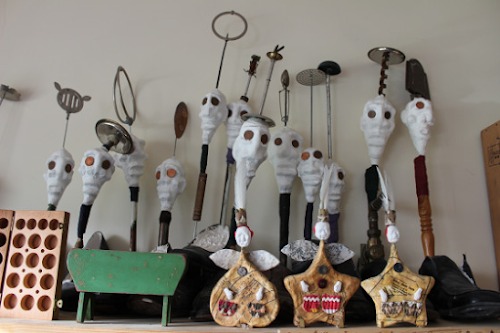 In the course of the years Kate Bradbury's apartment has become increasingly occupied by a large variety of many almost life-size sculptures which are arranged in groups, such as the Gleaners, the Angels, the Dervishes and the Goat Men.

A very specific part of Kate's collection of sculptures consists of the suitcase people, which top up the house in large numbers.  These creations are made of old suitcases found at junk shops, which are filled with other objets trouvés that indicate the character depicted in the sculpture, such as a painter may have a suitcase filled with paintbrushes and Railway Jim has a railroad track with a small train.

Apart from the head which is made from paper maché, all other parts of the sculpture such as clothes, hats and other attributes consist of objects collected on the street or at junkyards. 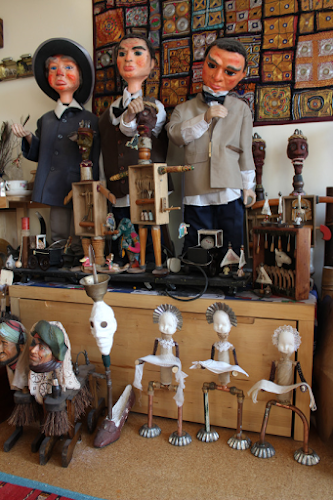 Kate Bradbury's sculptures as displayed in her flat constitute kind of an indoor art environment. This obviously is a private affair, which can't be visited by the public.

Documentation
* Article on Outside In with a report about a visit to Kate Bradbury's house
* Article on Outside In announcing an exposition 4-17 March 2013, with some biographical info
* Article (November 2013) by Kate Davey on weblog KD Outsider art
* Website announcing the 2009 Wild Old Women exposition
* On the website Deviation Street Magazine (June, 2019) an interview with Kate Bradbury

Kate Bradbury
London, United Kingdom
the home is private, no public visits
Posted by henk van es at 10:18 AM