Facing the North Sea, Hartlepool is an industrial and harbour town of some 92.000 inhabitants in the far north west of England, known from its now gone, once very numerous shipbuilding companies.

In terms of art environments by non-professionals the town could boast a very special site: a house with exterior walls decorated with thousands of beer cans, as well as separate beer can structures in the back yard.

To my knowledge, such a site is a unique kind of art environment, not alone in the United Kingdom, but also throughout Western Europe (In the United States there are some examples of sites decorated with beer cans).

This Can House was created by Philip Muspratt (1952-2015). A married man with four children, he worked as a bus driver, but had to retire prematurely because of a disability.

To amuse his father, who had come to live with him after his wife died, Muspratt started in 1995 constructing a wall in his backyard from empty beer bottles. It became a creation of some 10 m (33 ft) long and 1,5 m (5 ft) high.

Apparently enthusiastic by this activity, Muspratt decided to continue, partly because he thought that in this way he could raise money for the restoration of a local church.

So he began decorating front and side wall of the house, initially using beer bottles, but from 2005 on working with beer cans. gluing bottles and cans together and to the wall with waterproof adhesive and arranging them in geometrical patterns.

And then Muspratt also made stand alone creations, such as a barbecue installation and the pyramidal structure pictured below, which is a fountain that actually sprays a jet of water.

At long last Muspratt had processed some 75.000 beer bottles and cans. Family and friends helped to gather these. As Muspratt said in an interview  with a local newspaper (not available anymore):

We've all done our fair share of drinking to get the cans, but people come and donate their empties once they hear what I'm doing.

Can House, the movie

Filmmaker Maxy Neil Bianco, from Hartlepool, valued the Can House and its creator as a good subject for a documentary film, a topic he not just viewed in terms of contemporary folk art, but also as an act of defiance, a two fingers up to the hand of fate, to a world slowly degenerating and disappearing.
.
Muspratt and his family and friends were gladly willing to participate in the film and in 2011 its footage was shot.

It became a great documentary. Against the background of the transience of the old port town it gives a picture of people at the edge of society who in their own way create a thing of beauty, which somehow gives sense to their lives. Indeed, that's what art environments might be about. 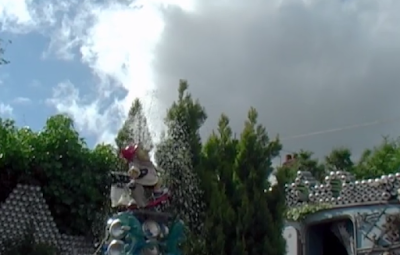 Maxy Neil Bianco's movie was also of historical significance because it documented an art environment which for some time already was at risk with decomposition because of plans of the authorities to renovate the district where it was located.

Phillip Muspratt would not experience the disappearance of his creation. He died September 20, 2015 at age 63.

Early January 2018 a newspaper reported that the family by court order had left the house, which was knocked down to make way for new houses.

Philip Muspratt
Can House
Corner Raby Road/Raby Gardens
Hartlepool, North East England, UK
in 2018 the house has been knocked down to make way for new houses
Posted by henk van es at 12:01 PM