Petr Leonidovich Zhurilenko (August 1929 - ??) was a folk art artist who lived in the small community of Sudbodarovka in the Oldenburg region in the Russian Federation ¹.

He made a variety of naive paintings, which were exposed in the region, but also in Moscow, where he took part with a single painting in the large exhibition of naive and outsider art in 2013.

The catalogue of this exposition (p.194) says that Zhurilenko meanwhile had switched from making paintings to making sculptures.

Above picture also has the scene as in the first picture, but then with added signs, that say the sculptures have been made in 2014.
The sign on the left indicates that the three characters are Mikhail Illarionovich Kutuzov with his adjutant and a guard as in 1812.
The sign on the right, insofar readable, says that the queen is in Moscow because of negotiations.
Kutuzov (1745-1813) was a famous Russian army commander, who in 1812 repelled Napoleon’s invasion of Russia. The queen must be Queen Elizabeth, who, accompanied by Prince Philip, in October 1994 was the first British monarch to visit Moscow, where she met former president Boris Yeltsin. 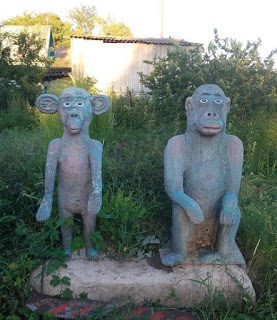 The in my opinion rather impressive scene with general Kutuzov and Queen Elizabeth is undoubtedly part of a recently started and gradually expanding art environment in Zhurilenko's garden, because another picture of a creation by Zhurilenko is available, that shows two monkey's (?) with in the background a barn and another construction, which might be the residential house.
Up to now the internet has no descriptions of Zhurilenko's art environment. but further research has begun and this will hopefully bring more information ².
In 2021 it has been reported hat Zhurilenko had passed away, this without any referral to  in what year this happened.
notes
¹   I am grateful to Alexander Emelyanov (creator of an art environment in Samara, Russian Federation) who contacted the museum in Moscow about the first photo in this post and is actively engaged in collecting more information about this art environment
²  I would like to get in touch with the unknown photographer(s) of some pictures in this post