Alexander Emelyanov’s  art environment in Samara, Russia, started around 2011, is one of the most interesting of Russia, first because of its continuous thematic as well as spacious development in recent years, but then also because of the personality of its designer, who is not just an artist, but first and foremost a philosopher and scientist.

Life and works
Emelyanov was born in 1964 in Tashkent, Russia. He studied pediatrics in the 1980s, was in the army (1994-1998) and settled in 1998 as a hospital doctor in Samara, a city in the south-eastern part of European Russia on the east banks of the Volga River.

An industrial city, Samara is also a scientific, educational and cultural center with a number of drama theaters, a ballet theater, an opera house, a philharmonic and various museums and art galleries.

Attracted to the world of art, Emelyanov in the late 1990s as a self-taught artist began making paintings in a naive style. In the course of the years he has made several hundred paintings. 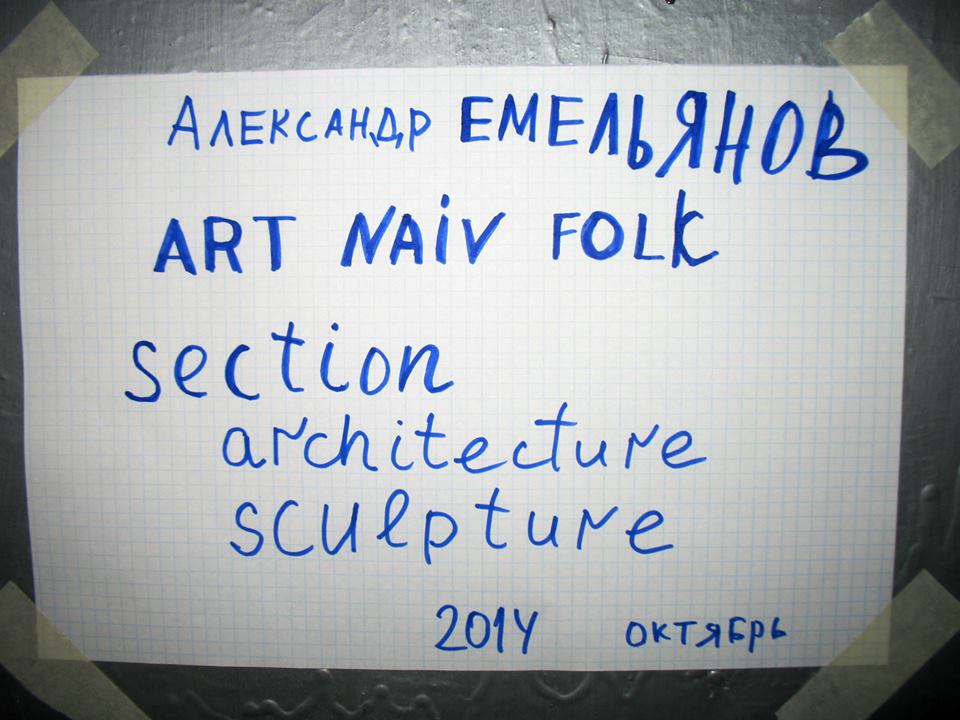 Around 2009 Emelyanov added another approach to his artistic activities by examining what he could create in the field of architecture and sculpting from an art brut point of view.

The picture below has an early example of this new approach. Entitled Akvaduk 3 it is a sculpture that probably inspired Emelyanov to continue making creations in the context of akvaduktologa, a self made term that denotes a special variety of built structures with uprights and girders.

The transformation of the garden around his house into an art environment began around 2011 when Emelyanov began constructing a huge structure made from used material such as old barrels, pots, parts of a refrigerator and so on: the Akvaduk Tashkent 13, as in below picture.

This impressive, high rising structure of 4 meters wide and 3 meters high (13.1 x 9.8 ft) along the garden's fence, entitled Akvaduk Tashkent 13, when seen as a whole has the potential of a spaceship, and hides in its details various imaginative scenes, such as the medics in below picture.

Various other creative elements in the garden 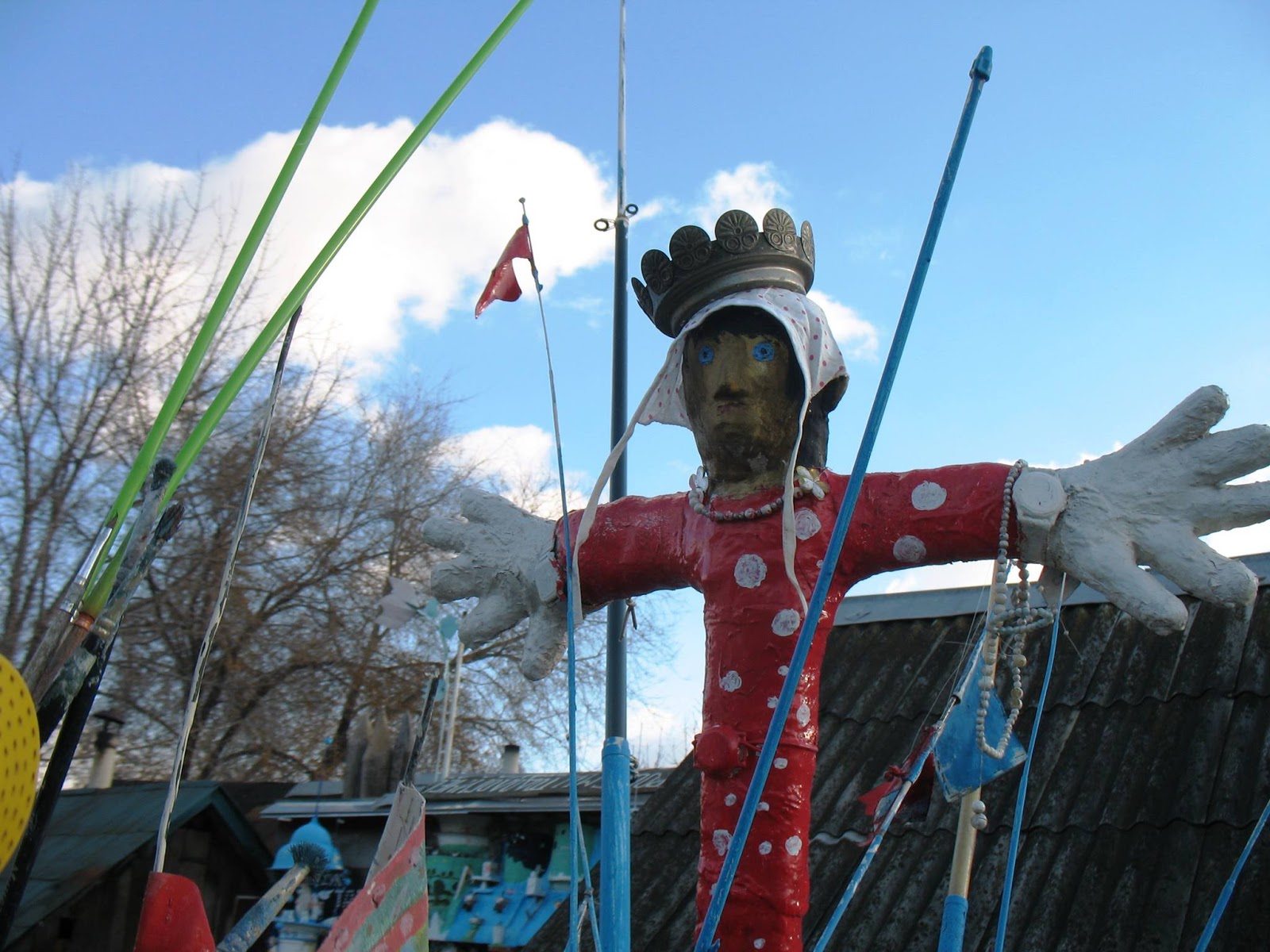 The garden has been filled with various other items, such as puppets, sculptures, decorated walls, panels with texts or inscriptions.... 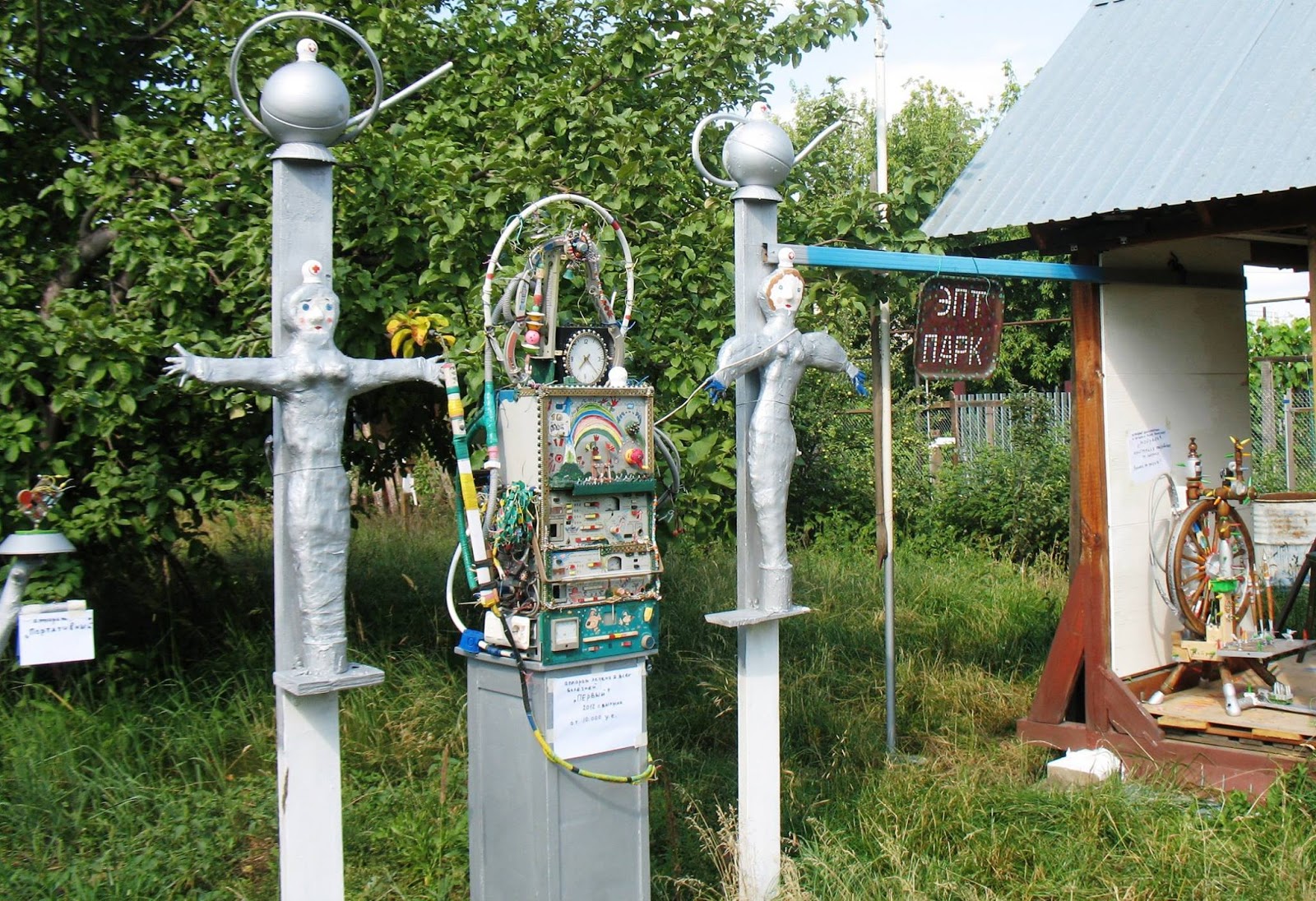 Some totem-like sculpted elements and structures -as in above picture- mark the entrance to a gazebo that first was the artist's own art gallery, but later got other destinations. 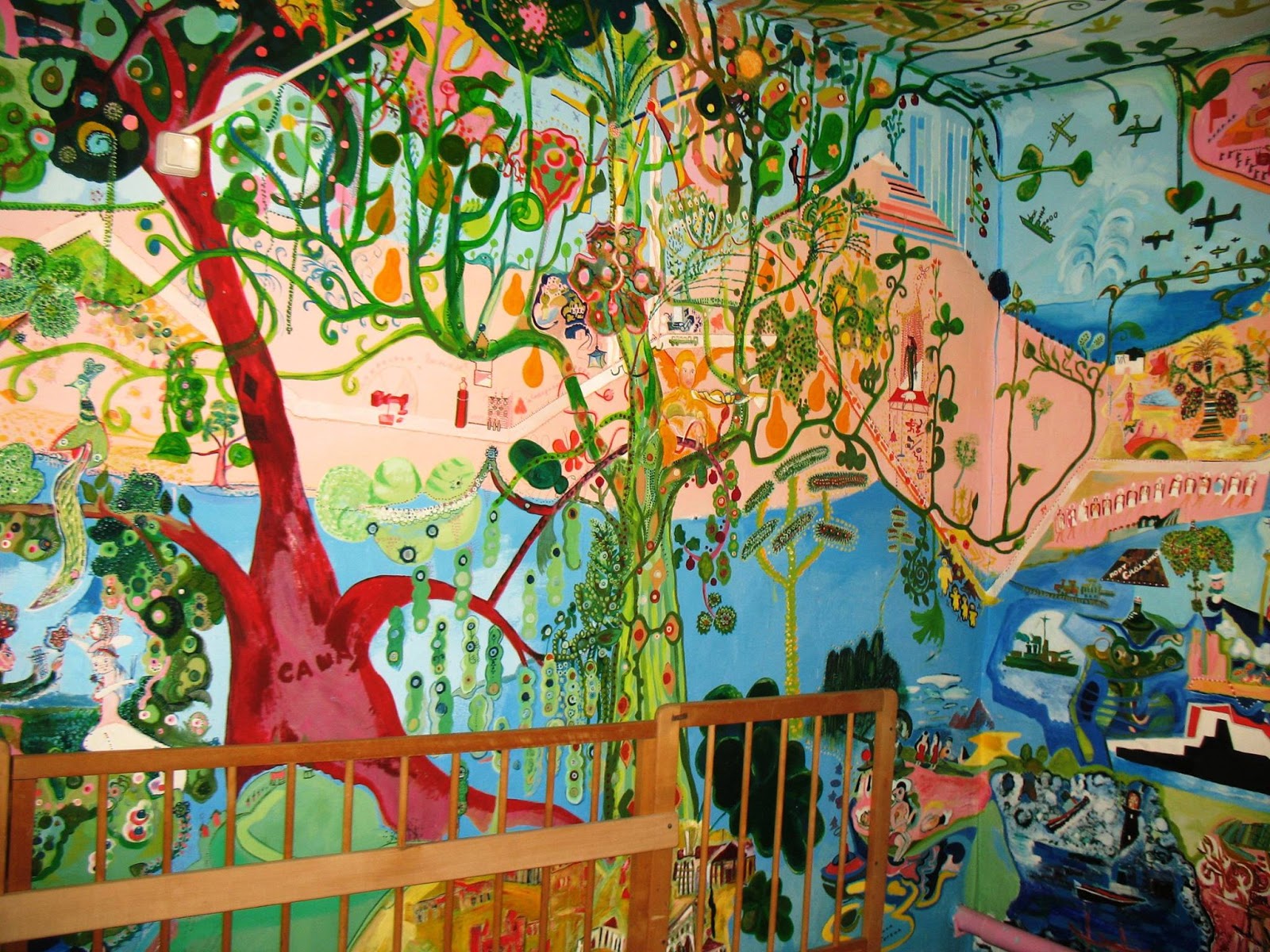 Indoors Emelyanov has decorated the walls of two rooms with frescoes, executed with oil and acrylic paint. One fresco is entitled The temple of the first heaven, the other bears the name Paradise No 2.

Decorating the walls of a house in Russia traditionally is not uncommon, in particular in farmhouses in the countryside. However, Emelyanov's way of painting the frescoes is not traditionally at all. The style of his frescoes may have links with naive art, but then with a lot of references to contemporary ways of expression and themes. 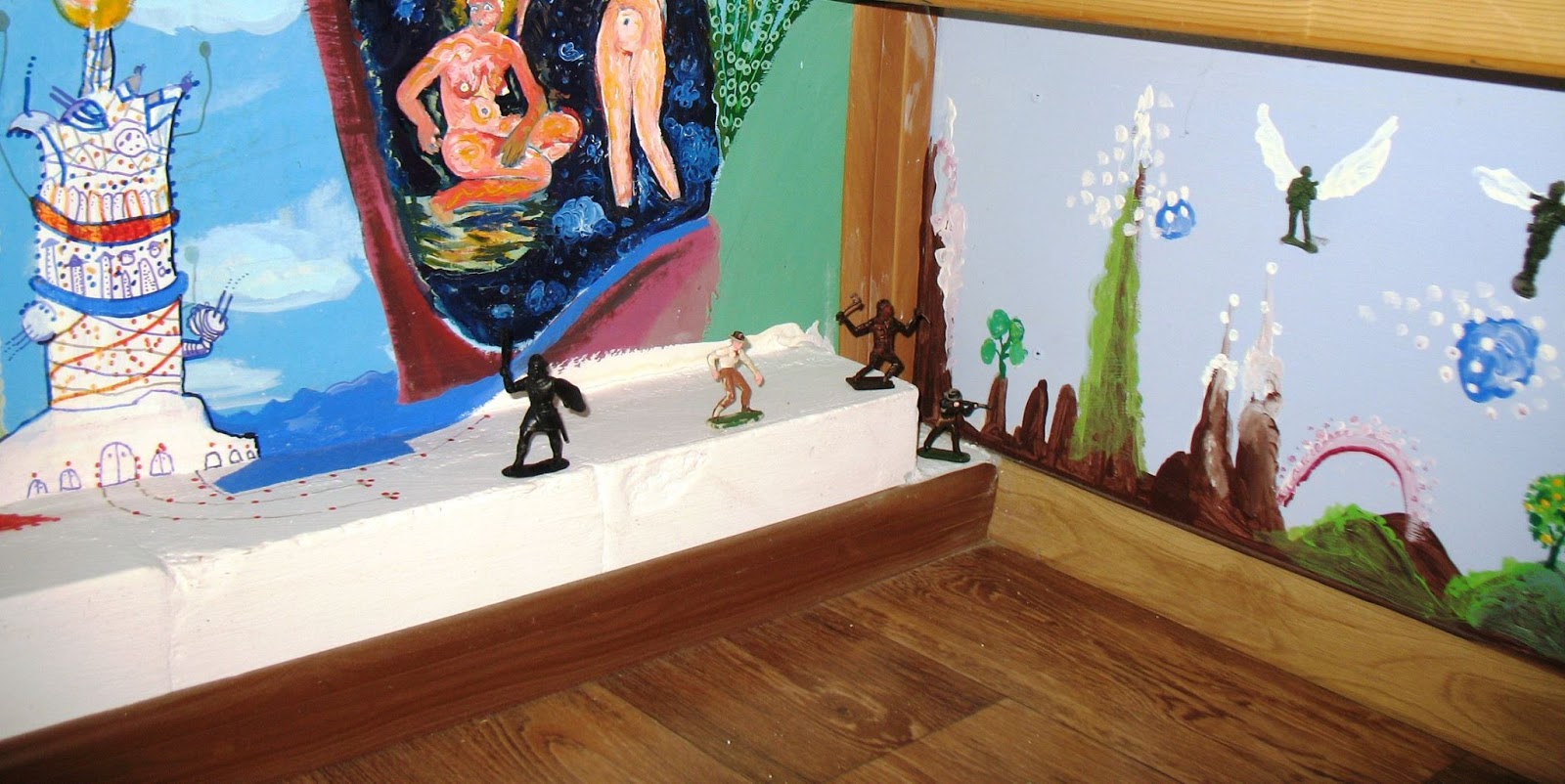 In the same manner, the way Emelyanov has transformed his house and garden into an art environment, in particular his preference to work with cement and iron and with recycled material, is very much in line with other builders of art environments elsewhere in Europe.


With some of these creators, in particular those from Finland, he shares the non-traditional, visionary and often humorist way of portraying of and commenting upon happenings around.

Emelyanov, the philosopher and scientist

Alexander Emelyanov is not only active in the field of folk art, he first of all is interested in philosophy and he describes himself as a “philosopher with visuals”.

He completed his studies with a dissertation on a topic in pediatrics. In his further scientific development a specific theme has become very important, namely the reconstruction of the history of the New Testament.

On this topic he already published two studies: Иисус  врач иудейский, March 2015 (Jesus is a Hebrew doctor, available as e-book). In this book the idea is elaborated and argued that Jesus was a unique doctor, psychotherapist and teacher, as well as the founder of a medical school.

View on the field of art environments

Emelyanov's philosophic approach of the field of art environments implies that, in fact, each creator of a folk art environment is the author of a philosophical art system, which is designed and constructed using a variety of materials and which is inextricably linked with the place of living and the country of the author.

Most creators of an art environment act on the basis of a relatively simple philosophy which just involves the satisfaction that arises from embellishing their daily environment.

But a small number of creators, who seek self-confirmation by expressing themselves in artwork, operate on a more fundamental philosophical level.

For example Yevgeny M. Malakhin, also known as Bukashkin (1938-2005) from Yekaterinburg, Russia, developed a theory about garbage to the effect that waste can be seen as art or as a base of an artwork, and following this concept he painted murals on concrete fences, garages, walls of buildings, garbage bins and so on.

Another example is Chomo (1907-1999) from France, whose artwork -and his way of life retracted in the woods- derives from a fundamental criticism of the consumer society.

Emelyanov, who as an active philosopher is part of this small number of creators, classifies the art environments made by these creators as mega art environments, wherein mega refers to the more comprehensive nature of the principles underlying the artwork.

This art environment is an ongoing affair

The naive architecture in the garden is an ongoing affair. In 2015 Emelyanov added constructions which depict an airport. 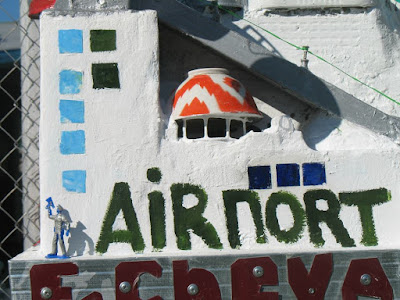 This airport is named F. Cheval 1, a humorous reference to the famous French postman who created le Palais Ideal (the Ideal Palace). 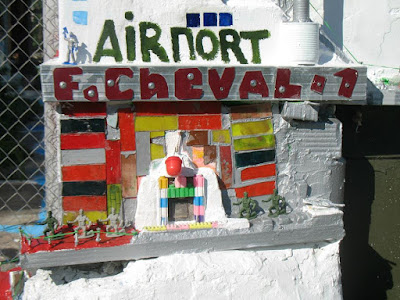 The picture below portrays the control tower. 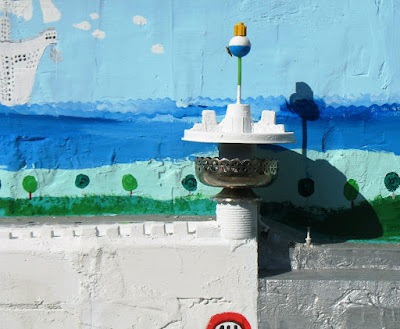 During 2016 Emelyanov expanded the scope of his activities in the field of art environments, both in conceptual and in practical terms. 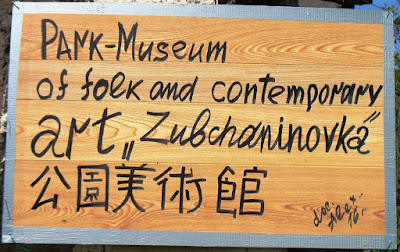 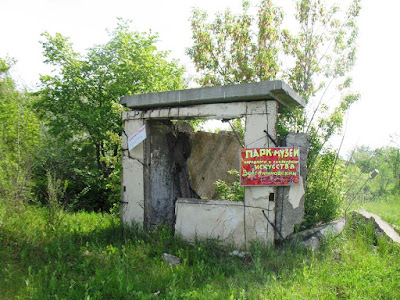 The site includes a piece of unused land located out of town. The office is equipped with a signboard and some smaller creations already have been arranged.

Indeed, Emelyanov is constantly actively engaged in the development of his art environment. The photo above (March 2018) shows the entrance of the site, as it was recently re-assembled. 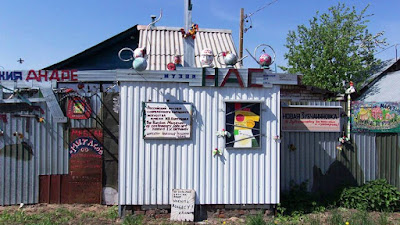 With the transformation of the site from art environment into a museum, Emelyanov is taking an important step, because it underlines that self-taught artists and art environments deserve a full-fledged place in the art world. The homage to Ivan Karpunov (1909-2004), an artist from a previous generation living in Samara and characterized by a unique handwriting, is fully in accordance with this.

The facade also includes a reference to Emelyanov's philosophical studies.
In 2018 a cross was erected, with the twelve disciples rowing a boat on a sea of denim fabric. A reference to the Gospel of Mark, chapter 8 paragraphs 14-21, from which the text on the cross Do you not understand it yet? is derived too. 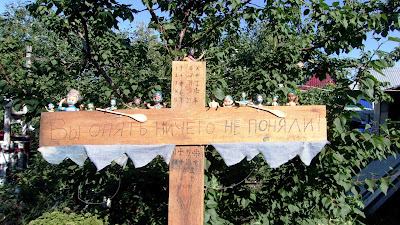 Marginal Art Festival 2022
In 2022 there was a special art festival in Russia entitled: Aesthetics of Bricolage, a project that in various ways focused on marginal art in Russian. In that context, attention is also paid to the phenomenon of art environments, which is still relatively unknown in the Russian art world.
On July 16, 2022, as part of this project, some creations by Emelyanov were exhibited in the courtyard of the All-Russian Museum of Decorative Arts in Moscow.
Earlier in July, a film crew visited Emelyanov's site to make a documentary of the creations and their creator. Hopefully it will be available in due course to add to this article, whether or not by reference.
Documentation
* Article by Alexander Emelyanov, Folk art environments of Russia, from previous to later creations, in OEE-texts (added April 2017)
* Website ArtMajeur has a selection of Emelyanov's (recent) creative constructions
* Page on Facebook
first published October 2014, last revised July 2022