Tyrawie Woloskiej (Tyrawa Woloska) is a small community in the south of Poland, not far from the border with Ukraine. It is known from Quo Vadis, an exhibition of numerous wooden sculptures in the garden of a private house

Boguslawa Iwanoskiego (Boguslav Ivanovski), who created this art environment, was born in 1934 in Dorhun (district Grodno), a community that currently is part of Belarus but which before World War II belonged to Poland.

The shift of the border between Poland and Belarus, which took place after World War II, resulted in the russification of Ivanovski's birthplace, such as collectivization of agriculture. Opposition of villagers was brutally oppressed, Ivanovski's father was imprisoned, his brother was executed and he himself, although rather young was deported to Russia, where he for a number of years had to work in a labor camp.

In later years while still staying in Russia, he succeeded in doing a training as a car mechanic. 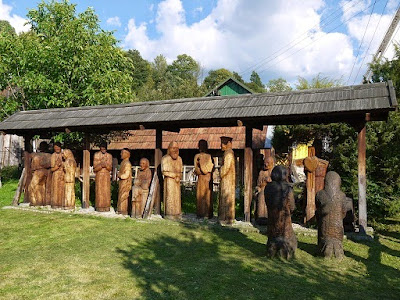 In the early 1960s Ivanovski returned to Poland. In 1961 he settled in Szczecin, a harbour town located along the Oder river and near the Baltic Sea in the north of the country. He got a job as a service technician at the local public transport company.

A career as folk artist

In the course of the 1960s Ivanovski as an amateur artist began to develop his artistic talent, initially in the fields of poetry and painting, but soon turning to making wooden sculptures, which would become his lifelong passion.

He became a member of the Klubu Plastyków-Amatorów i Twórców Ludowych (Club of amateur painters and folk artists) that would meet in the provincial House of Culture. He took part in various expositions, including one in the context of the in Poland well known Centralne Dożynki (Central Harvest Festival). 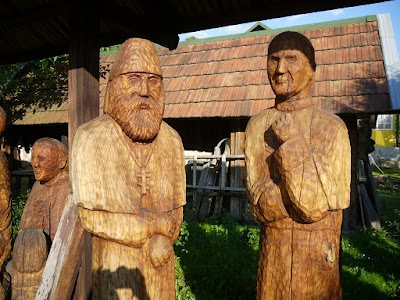 In 1986 Ivanovski moved from Szczecin to Tyrawa Woloska, a village that reminded him very much of his native region.

Here he would stay for the rest of his life, fully devoting himself to making wooden sculptures and setting up an open-air exhibition area.

Ivanovski has created an imposing amount of artwork since in the mid 1960s he began making folk art. His wooden sculptures, made in several sizes, including a number that are larger than life, have a naturalistic character and are sculpted in a classical folk art style.

His work reflects his attachment to his native Poland. The collection, divided between the house and the outdoor exhibition area, includes sculptures and sculpted reliefs which refer to important personalities and happenings in the history of Poland, such as Polish kings and princes, the statesman Józef Pilsudski (a series of works depicting various stages in his life) and the Katyn Massacre.

Another series of sculptures is devoted to Pope John Paul II, altogether some 24 monumental sculptures. 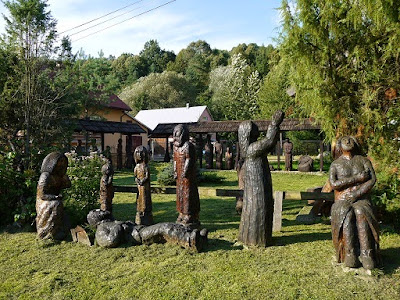 But one can also see  characters derived from fairy tales and all kinds of portrayals of common people, such as the one of a young lady with a cat in her arms. 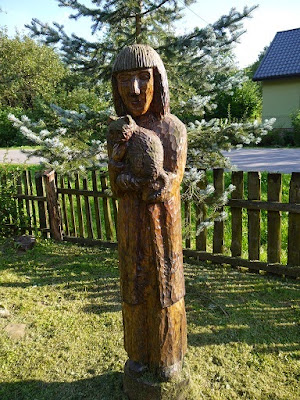 Ivanovski currently (2016) is in his early eighties and processing wood is becoming rather hard for him to do, so he is considering switching to other artistic approaches, such as making ceramics or working with concrete.

The garden is open to the public

Ivanovski's sculpture garden can be visited by the public. It attracts a lot of visitors and when at home the artist is gladly willing to inform visitors about his work.

Ivanosvski was awarded a bronze medal

In march 2016 on the occasion of the 50th anniversary of his artistic calling, the chairman of the parliament of the Podkarpackie voivodeship (province) awarded Ivanovski with a bronze medal Gloria Artis.

Documentation
* Article by Wieslaw Hop on weblog Opowiadania współczesne (Contemporary stories), June 12, 2016 (with a series of pictures)
* Website of Tyrawa Woloska with a page devoted to Ivanovski and the sculpture garden
* Article on weblog Na Pogórzu (Foothills), October 2013 (illustrated)
* French author of a weblog about French outsider art and art environments Sophie Lepetit in 2014 made a trip to Poland and published a large series of pictures of the Quo Vadis sculpture garden on her weblog