This is the story of a very special non-conformist outsider artist, who in the 1990s brightened the center of Yekaterinburg with music and a lot of colorful murals he painted on buildings and fences.

Yekaterinburg is a large city in the Russian Federation, located at the eastern edge of what in geographical terms in general is considered as Europe.

Born in Irkutsk on September 16, 1938, Yevgeny Mikhailovich Malakhin studied in Izhevsk, where he graduated as an engineer in energy supplies. After his studies, in 1961 he went to live in Sverdlovsk (as Yekaterinburg was called from 1924 to 1991), a city where he would stay for  the rest of his life.

He got a job as senior engineer at the electricity company Uralenergo. In 1965 he married Valerie Petrovka and the couple would have a daughter, Nastya. In 1971 he and his wife made a long journey, visiting Senegal and various European countries.

Development as an artist

Malakhin was rather interested in philosophy and music. The 1970s became for him a period to try out all kinds of artistic activities. In the early 1970s he was active in experimental photography. Later he  worked with wood, made paintings as a self-taught painter and wrote poetry and published books.

In the mid 1980s he had a first exposition and from that time his need to present himself as an artist was growing.

So he equipped himself with an artist name, first Kakiem Akahievich Kashkin, also K.A. Kashkin, which later would become B.U. Kashkin or Bukashkin. He also rented his own studio, a small room in the basement of a building on Tolmachev Street in the center of the city and began to live more and more on his own.

In 1992 Malakhin ended his job at Uralenergo and fully devoted himself to a sober, but pronounced existence as an artist.

As Bukashkin he would become Yekaterinburg’s major non-conformist artist of the 1990s. He was also quite recognizable as such, a bearded man, walking around in the city with a balalaika, a large tambourine on his neck and bells on his hat.

In his artwork he promoted family relations and love for one’s country as important values and he urged citizens not to drink or smoke, to love others, enjoy life and do good deeds. One will find these these themes in the some twenty educative and ecological books he wrote and published himself and also in his paintings and drawings, he often handed out to onlookers for free. 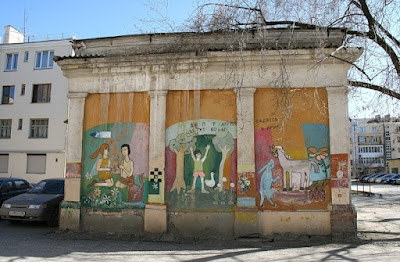 He became rather well known in his country and was also named  Russian people's janitor (for a short period he worked as janitor at a bank).

Paint the garbage, paint the town

In the early 1990s Bukashkin began a campaign with the slogan Paint the garbage.

He developed a theory about garbage to the effect that waste can be seen as art or as a basis of an artwork, probably a fairly unusual opinion in Bukashkin's society of that time, but then already prevalent in the field of art environments elsewhere in Europe.

In his view even the ugliest places in town could be made pretty to look at. So he began making paintings on concrete fences, garages, walls of buildings, garbage bins and so on. It has been said the whole city was his canvas. 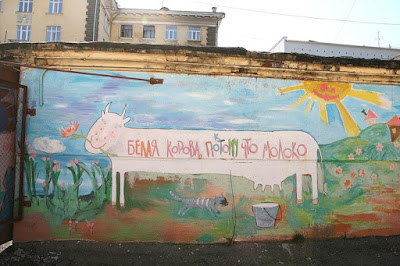 In the city of Yekaterinburg as it was in the 1990s, Bukashkin probably was the first to do such murals and he can be seen as a pioneer of what later would be considered as street art.

The idiom which is reflected in his wall decorations marks him as an artist in the field of outsider art.

Bukashkin has made over thirty murals, which meanwhile partly have faded away or have gone lost. An association of friends has ensured that some were restored and that on various spots replicas have been placed.

At the end of 2004 Bukashkin had to leave his studio at Tolmachev Street, because the building would be demolished and replaced by a new construction. Some months later, the artist died of an acute asthma attack on March 13, 2005.

To keep the memory of Bukashkin alive on January 8, 2008 a group of friends founded an association named Old Man Bukashkin, presided by Yevgeny Artyukh, well-known in political and business circles in Yekaterinburg. One of their activities was to make a Bukashkin Trail, a walk along the spots where the artist had put up his wall paintings. The association also has contributed to the realization of a museum in Yekaterinburg devoted to Bukashkin.

Initiated by professors and students of the Ural Federal University the B.U. Kashkina Museum opened on December 19th 2008.

The museum, located at Lenin Avenue 51 in Yekaterinburg, aims to present and study non-standard modern urban culture in its various forms in order to understand its creative role in shaping a positive image of the urban environment.

It holds works and documents of and about Bukashkin and it also documents other non-conformist movements and naive artists in the Ural.

Documentation
* B.U.Kashkin (1938–2005): Life and Art of Ural Punk Skomorokh, Edited by Aleksandr Shaburov.    This book, a first collection and review of Bukashkin’s creative work, was published at the occasion of the exhibition in 2015 I’ve Lived My Life, I’m Not Dead Yet. A Tribute to B.U.Kashkin

* A series of 39 pictures of mainly Bukashkin's smaller paintings on labiscwi,gallery.ru
* Website of the association of friends (with various details of Malakhin's life, such as that in 1978 he told his wife that there was another woman in his life with whom he had a child; in the early 1980s he would start a new family with her)
* Alexander Shaburov, "The last of Skomorokhs. In memory of B.U. Kashkin", in: Umelec Magazine, 2010/2 (February 2010) (in English, a portrait of Bukashkin in the context of the Russian avantgarde)
* On the website  Uralnash an article (June 2011) by Irina Schminke, with pictures of murals at the inner court at Lenin Avenue

Videos
* The internet has a lot of videos about the artist. Here is a link to a list of mainly Russian spoken videos
* Just for a first introduction, here is a video (by MrMediaProduction) that even if you do not understand Russian, gives a good idea of Bukashkin's various activities (11'56", YouTube,  January 2014)

Yevgeny M. Malakhin
also known as Bukashkin
Yekaterinburg, Sverdlovsk region, Russian Federation
to see what is left of the murals there is a walking trail
(starts at Lenin Avenue 5b, see a tourist guide or get info at a tourist office)