Located in a small Russian community, the house pictured above was built by it's occupant. The site has become known in Russia for the wooden sculptures displayed in the garden near the house.

Born april 1st 1952 in the small community of Parmalayvo in the Kochyovsky district (Perm region, Russia), Egor Federovich Utrobin at an early age already showed an artistic talent. When he was still in elementary school he already made his first wooden sculpture. He went to high school but, although talented, subsequently he wouldn't go to an art school. Maybe he was a bit shy and too modest about his artistic aptitude.

Anyhow, Utrobin got a job on a farm. Later he was conscripted in the army and when returned to his natal village he resumed his activities in farm work. 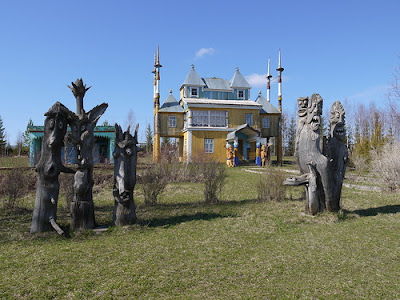 He married, built the family home, got children, and then in the late 1980s when he was in his mid-thirties, he regained his original creative spirit and began making sculptures he displayed near his house.

Utrobin uses large tree stumps which are  left in the woods, regarded as unusable by loggers. Like so many sculptors who work with stumps, he already sees in the raw tree the character to depict. 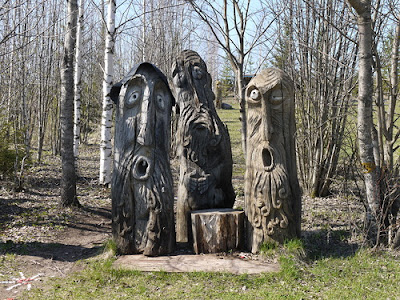 Currently (2016) there are almost fifty sculptures in the garden. One can see demons, dragons, knights and legendary Russian folk heroes like Kudym-Osh, but also depictions of ordinary people.

Occasionally villagers think they recognize themselves and Utrobin admits this sometimes is rightly. 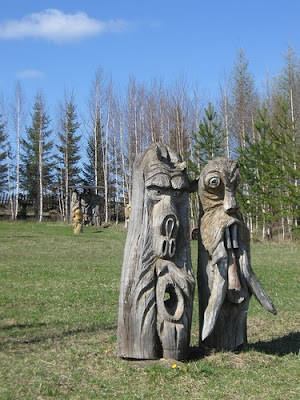 Gradually the display of wooden sculptures became known in Russia and gradually also the number of visitors increased. In agreement with the local authorities, in 1993 Utrobin decided to denote the site as a museum. However, formally the site isn't part of the Perm region's cultural infrastructure. 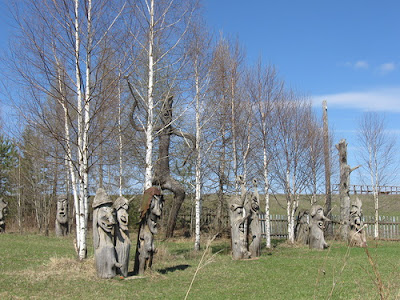 Last but not least: Utrobin's house itself, with it's specific structure and the four minaret-like towers, may also be seen as a successful example of singular architecture.