Above art environment, a decorated house and garden, is located in the small community of Leskhovo, some 43 km west of Moscow in Russia.

The site was created by Anatoly Mikhailovich Lobanov, about whom little biographical information is available.

He probably was born in the 1940s or 1950s and he had a job as mechanic at a plastic factory, maybe the one in Golygino, north of Moscow.


In the production of plastic items residual material is left and Lobanov got the idea to use this colorful scrap to embellish his house. He thus began in the early 1970s, a project he continued in the following decades.

Currently the house, the outbuildings, the garden and the fence are almost completely decorated with symmetrically arranged geometrical cut colorful pieces of plastic, such as circles, polygons, stars.....

Although in the field of European art environments some sites partially include plastic items, to my knowledge there are no sites which are exclusively decorated with this material. This makes Lobanov's creation rather unique. 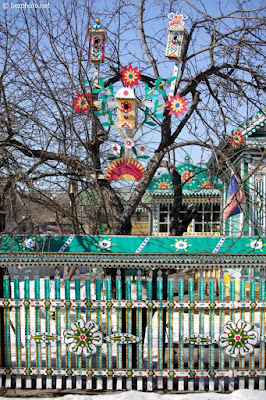 Trees in the garden are adorned with circular ornaments and decorated birdhouses. Comparable arrangements are on top of poles. 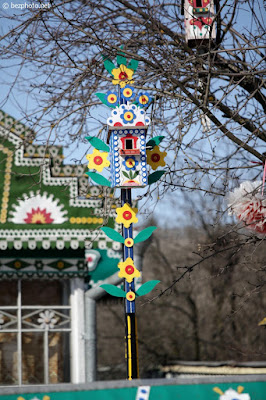 Although most decorative items have a geometric pattern, some of these decorations show depictions of animals, such as a rooster on a roof, two storks on their nest or an eagle (?) as in below picture. 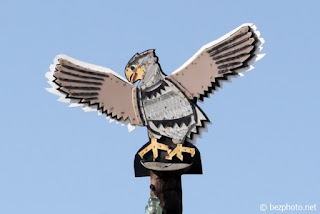 A pinnacle on one of the rooftops has two symmetrically placed side views of black horse heads around stylized flowers. 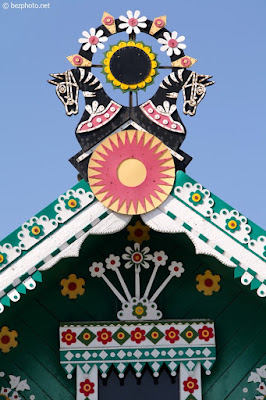 Less stylized is a stork in free flight, delivering a newborn (the stork attached to a line running from a roof to a tree).

This art environment, which occasionally is visited by tourists on guided tours, can be seen from the road.

Anatoly Lobanov
Decorated house and garden
Leshkovo, Istra district, Russian Federation
can be seen from the street
Posted by henk van es at 10:46 AM