Naro-Fominsk is a city in Russia, located some 80 kilometers south-west of Moscow. In this area between October 1941 and January 1942 the advance of the German army was stopped, one of the decisive moments in World War II. Dozens of monuments in the town and the surrounding area still bear witness to this.

In the outskirts of the city, near the monastery of the Holy Trinity in Zosimova Pustyn', there is an art environment, locally known as the house of the magician

The house of the magician

This art environment was created by Nikolai Panferova.

The main feature of the site is the abundance of toy dolls which are used in various ways as decorative elements. They are attached to the exterior walls and the roofs of the various buildings, sometimes they hang from a beam, but they also sit together in a tree or on a fence. 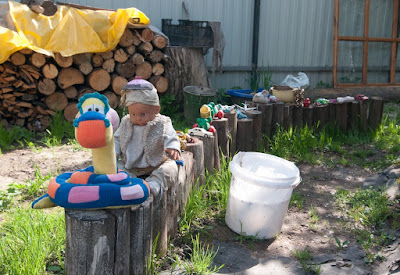 There isn't much biographical information available about Panferova, except that he lived in Moscow and that he in 2009 moved to this house in Zosimova Pustyn' which he already owned as a summer house.

Probably around that time he began embellishing the site in order to find -as has been reported- a special atmosphere, relaxation and happiness.

He just began with a couple of dolls and when he gradually expanded the site, at some moment it got fame and subsequently people from the area and tourists came bringing him dolls. 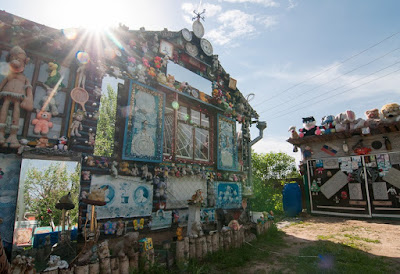 Except toy dolls the decorations also include other elements. So the facade of the living house, pictured above, has decorated window shutters and large color pictures. 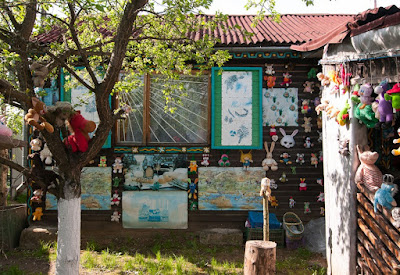 Similar arrangements can be seen on above picture of a side wall of the living house. 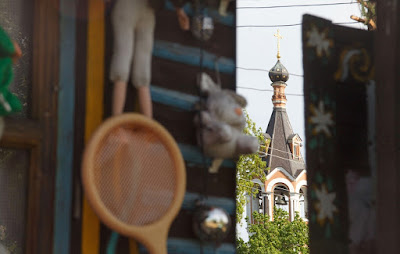 The house of the magician is located along a country road that surrounds a walled convent, founded in 1826. The picture above provides a glimpse on a tower of that monastery,