The mural depicted above shows a map in the form of a globe with the landmarks and historical sites of the provincial town of Borovsk in Russia, which is located some 115 kilometers south-west of Moscow.

This is one of the dozens of frescoes made by Vladimir A. Ovchinnikov, which embellish the walls of the buildings in this town.

Born in 1938, Ovchinnikov had a technical education at the Moscow Institute of Civil Engineering and then got a job in that field, working with construction companies in building houses, chimneys, lighthouses and so on. He also studied economics and became a candidate of economic sciences.

During his working life he lived in Moscow, but once retired in 1998, he moved to Borovsk.

Ovchinnikov all his life was interested in making drawings and paintings, but his busy job gave him little chance to do so. However, when retired he had time enough and as a self-taught visual artist he went to work.

Already in 2000 he had a first exposition in the local Borovskaya Picture Gallery where he presented some hundred landscapes, still lifes and portraits.

Encouraged by a friend who had seen murals elsewhere, Ovchinnikov early 2002 decided to make an effort to create such decorations himself and he approached the mayor of the town, who verbally agreed with such an activity.

Both the mayor and Ovchinnikov at that time probably had no idea of the scope of what was about to happen, but once Ovchinnikov had begun making murals, he proved himself a prolific artist.

In the period between 2002 and 2005, during four summers, he created some 90 murals. and meanwhile he has provided the town with such a large number of murals that it has been said that he transformed the city into the largest open air gallery in the world.

The frescoes in particular are located in places with a public function, such as government buildings, the fire station, the library, the court and the hospital, but also in places near shops or markets.

Ovchinnikov's murals, which predominantly are realized in a very meticulous way and with great attention to detail, include paintings with an illustrative character, such as landscapes.

But many murals have a narrative scope with scenes that relate to historical events and personalities, often in relation with Borovsk or Kaluga, the region where the city is located.

So there is a mural (picture above) of Dmitry Nikolayevich Senyavin (1763-1831), a famous Russian admiral who originated in Borovsk.

Another famous person depicted on a mural is Tsiolkovsky, the theoretician of Russian aerospace who lived both in Borovsk and in the Kaluga region.

As the picture above shows, in this mural Tsiolkovsky is depicted in an almost photographic way. Such
a way of representation is present in a large number of Ovchinnikov's frescoes, which to my knowledge is rather unique in the field of art environments.

Above picture also shows that a text is added to the painting. This is also a feature of Ovchinnikov's artwork.

These texts, often of a poetic nature, mainly have been written by his wife Elvíra Nikolaevna Chastikova, a poet and writer, who published some fourteen books (poetry, storybooks for children).

Well known historical events, especially if somehow related to the history of Borovsk, are another main topic in Ovchinnikov's oeuvre.

Those murals dealing with events in the ages before the 20th century, such as Napoleon's campaign in Russia (1812) and the great fire of 1857 that destroyed half of Borovsk, in general were appreciated by the inhabitants and the local authorities.

However, when in 2005 Ovchinnikov got involved with the rescue of an abandoned church and made a critical diptych with pictures of the mayor of Moscow and the governor of the region, he got the reproach to cause unrest.

In the summer of 2016 Ovchinnikov made a twenty meters long frescoe on a wall along Lenin street, in which he portrays twenty artists who worked in Borovsk in the 20th century.


In August 2016 a just completed artwork/monument named Gulag Archipelago, with pictures of twenty victims of political terror, was daubed with red and yellow paint, an event that became national news.

Relations with authorities have deteriorated

From around 2005, but certainly after the incident involving the Gulag Archipelago monument, relations between the authorities and Ovchinnikov deteriorated.

His various initiatives to pay attention to the memory of victims of political repression who lived in and around Borovsk were not well received and in the meantime some of his wall decorations that were unwelcome to the authorities, have been erased with paint to hide them from view.

Ovchinnikov also has received a fine for applying a painting to the wall of a public toilet (pictures above and below), this because of the costs of removal. 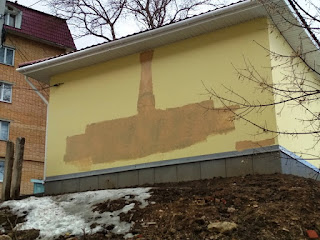 In June 2019, the website Les Alpha published a long article with a richly illustrated overview of these developments. In August 2019 the journal Pressa Obninsk had an article about the painting Ovchinnikov in July 2019 added on the backside of the war memorial on Lenin Square (picture below). 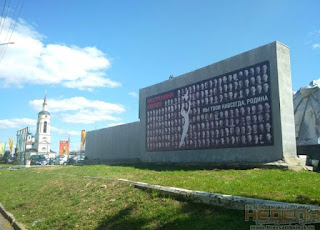 Ovchinnikov probably paints his murals directly on unprepared surfaces of bare brick or plaster. Especially in the case of brick this gives a specific expression to the painting, as can be seen in the picture of admiral Senyavin in this post, but the unprepared base may also result in fragility of the paintings.

The artist himself is aware of this. About the life span of his artworks he has said: "alas, not for centuries, under sunlight and atmospheric precipitation they retain color for a maximum of five to ten years."


* Video (August 2019, 1'20") on YouTube, trailer of a film by Boris Minaev entitled The Borovsk Project, a film worked on for four years about Ovchinnikov's activities to pay attention to the memory of the victims of political repression in Borovsk