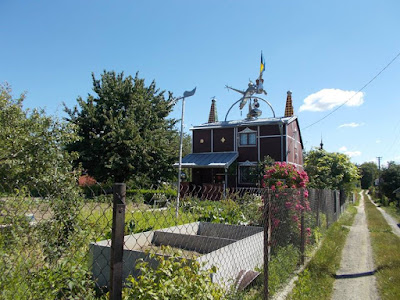 In the Ukrainian city of Lutsk since 2009 a rotatable metal installation that represents a dragon rises on the roof of a residential house. It's a creation by self-taught white-smith Pavel Andrikevich

Born in the late 1950's Andrikevich studied at the Civil Aviation Technical School in Leningrad, Russia (from 1991 on St Petersburg).  After his study he worked as a dispatcher at the traffic service of the regional airport of the Rivne region in the north-west of Ukraine.

In the 1980's he got a job at the in 1984 newly opened Volyn regional airport, not far from the city of Lutsk, where he went to live. 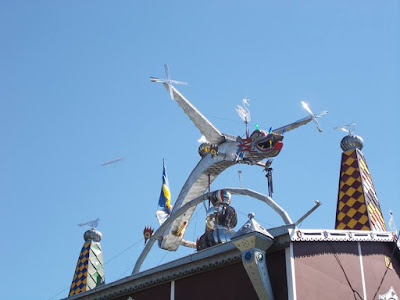 Around 1986 Andrikevich became interested in working with metal. Just as other self-taught artists make sculptures or other creations from wood, it's for Andrikevich an artistic adventure to work with metal.

In part his metalwork just delivers decorative items, for another part it results in functional products which are nice to see as well, as for example a decorated turbo vent as on the picture below. 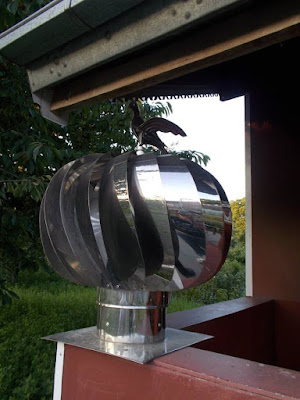 The airport of the Volyn region, where Andrikevich worked,  was successful in the 1980's, but it encountered problems following the dissolution of the USSR in december 1991. It officially closed in 1997, but Andrikevich may have lost his job earlier.

He got a new job at the TechnoModul company in Lutsk, which makes equipment for ventilation.

Next to this job Andrikevich also focused upon the manufacture of metal domes for churches, monasteries and other buildings in Lutsk and in the surrounding Volyn region. An example of such a dome is the one installed on the chapel at the site of a fire brigade in Lutsk. 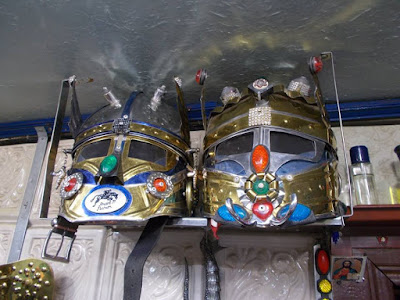 A very special part of Andrikevich's metalwork is his series of decorated helmets for motorcyclists, made from shining steel and adorned with various colorful stones.

These helmets indeed are suitable to wear when driving a motor cycle, but Andrikevich rarely will do so to prevent problems with the police. 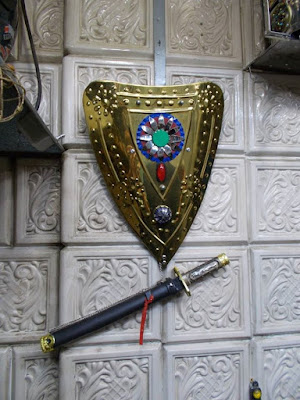 In addition to these helmets, Andrikevich's house and garden contain many more metal items, such as above shield and sword, but also a swing for children, storage boxes and various other decorative items. 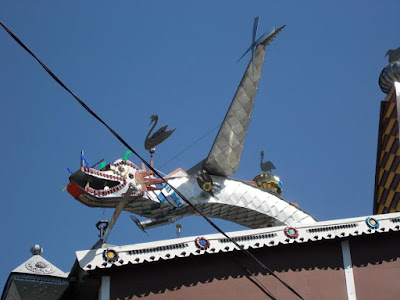 However, Andrikevich's most spectacular creation is the dragon on the roof of his two story house.

The idea to construct such a creature had been with Andrikevich for a while, but it actually took shape when he had to rest for weeks due to an accidentally broken thigh.

Made of aluminum in order not to be too heavy and resting on a base of galvanized steel, the five-meter long dragon can turn with the direction of the wind. It is flanked by decorated chimneys, crowned with pigeons.

With the help of his two sons, Andrikevich installed the creation on june 7, 2009.

Visible from afar, it attracts a lot of public interest, as it also resulted in various articles in the local and regional press.

Pavel Andrikevich
The house with a dragon
(name of street unknown)

Lutsk, Volyn region, Ukraine
no public visits,
the installation can be seen from the street

If you are looking for a specific art environment,
best use the the indexes above, by which one can select by
- name of the artist, or by
- country/region