Matti Järvenpää's art environment in Kyröskoski, Finland, for many years has remained a hidden gem. Only recently (spring 2017) written and visual information has become available on the internet about this extensive and impressive artwork.

Matti Järvenpää was born in 1936. Already at a young age he had fun in making small constructions. At adulthood he got a job at Kyrö Electric, a company designing and constructing all kinds of electrical installations. He worked there for 43 years until he retired around 2000.

Struck by the beauty of ancient objects and machinery in the agricultural business, Järvenpää made his first creation in 1967, a rocking chair. The re-use of old materials is evident, the seat of the chair for example appears to be derived from a tractor. 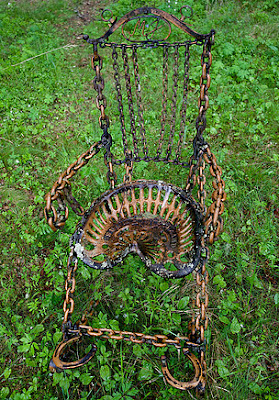 This was the first of a series of creations Järvenpää would produce in the years to come. His activity would result in an art environment which for one part consists of stand alone iron creations and for another part of clustered old industrial, agrarian or household objects made from (cast) iron.

The collection of some thirty iron artworks is exhibited in the green and fragrant surroundings of a pine forest near the small community of Kyröskoski, part of the larger community of Hämeenkyrö (region Pirkanmaa), some 220 north-west of Helsinki.

A special part of the collection is the series of creations made of clustered similar objects, such as the assembly in the picture above, composed from more or less uniform red and yellow lids surrounded by a radius, an assembly or clustering which as a whole expresses a sunset.

Järvenpää's art environment has a variety of such clustered artworks which testify to the creative ingenuity of the artist.

Such as a stack of multicolored buckets..... 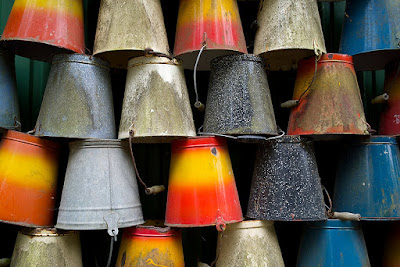 ...... or kind of a screen built with seats of tractors or other agricultural machines..... 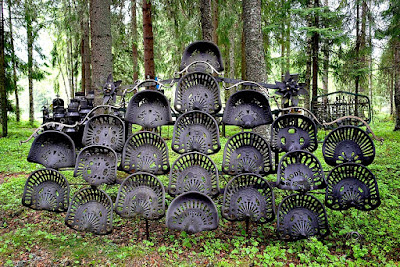 .....or a collection of pancake pans and other circular items added to a wooden wall..... 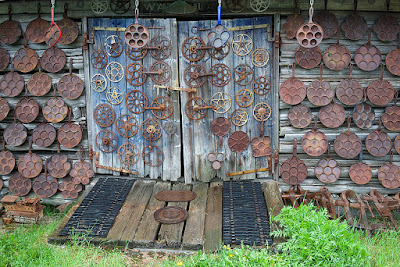 ........ or objects you do not recognize immediately, but which have to do with
agricultural or industrial activities in former times....... 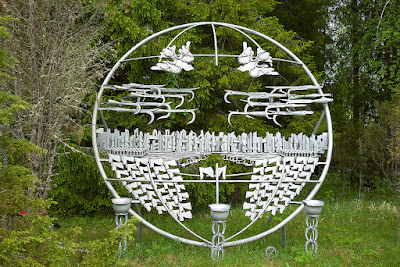 In the field of art environments Järvenpää's method of clustering similar items in designing an artwork occurs sporadically. In Finland Juha Vanhanen clustered old plowshares, painted white,  to portray a flight of birds. And in Italy Ettore Guatelli collected large quantities of old tools which he added to the walls of his house in rhythmic patterns.

In addition to the creations that constitute the art environment, Järvenpää owns a large collection of old cars, buses, billboards and the like, a collection that attracts a lot of interest from rally drivers and other lovers of old cars.