Парк Живых и Мёртвых/Park of the living and the dead

In the Ukrainian city Dnipro (Dnipropetrovsk until may 2016) an area that for some 200 years was used as a graveyard, in 1970 was transformed into a public parc. Denoted by the name Amurskiy Park, it is generally known as Park of the living and the dead.


The site has an eventful history. During World War II the graveyard was used as a place to perform executions, with victims among hostages and Jewish and Roma families. It has been said it was another Babi Yar ¹.

In the 1990's the site became a place where people dumped their waste, which was not or insufficiently countered by the authorities. The site probably hasn't an official status as a city park.

From the perspective of this weblog it is special that from 2003 on a large collection of sculptures made by self-taught artists was added to the park's grounds. 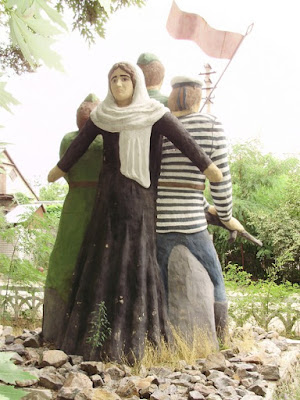 this picture (2009) and the next ones courtesy of Dmitry Desyaterik

This was done by members of the local Roma community Tarna Egor, led by Raisa Ivanovna Kuznetsova, who in an interview (2009) with Dmitry Desyaterik explains that the group first had to clean the area, where meanwhile large quantities of waste had been deposited and where it smelled terribly.

Then they placed benches and tables and planted flowers and bushes. 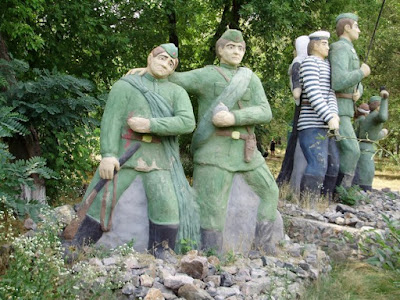 The stand alone sculptures and ensembles were made by individual self-taught artists, who used a common technical approach of applying cement or clay on an iron or wooden frame. 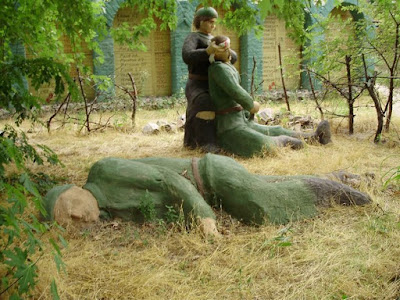 It became a project of some ten years, which ultimately resulted in a collection of some 200 sculptures, partly rather varied with respect to what was represented, for another part also sculptures  reflecting a specific theme.

One of this themes concerns memories to the second world war, with sculptures of soldiers with machine guns, a soldier sleeping forever in the grass, or nurses helping the injured.

The pictures above, a limited selection of what is drawn up in the park, give an idea of the realistic character of the sculptures dealing with the war.

Another theme that can be distinguished, concerns a series of sculptures with a religious connotation. 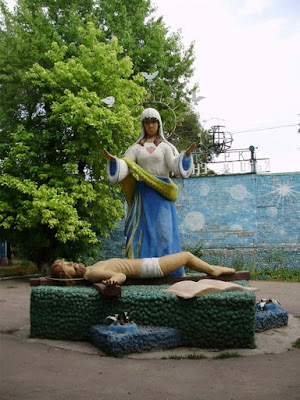 The scene in the picture above, depicting Holy Mary grieving for the dead Christ, is situated in a central spot of the park, as can be seen in the picture on top of this post, which also shows that Maria is flanked by a couple of angels kneeling and praying.

Another scene, in the picture below, depicts Maria Magdalena and a roman soldier 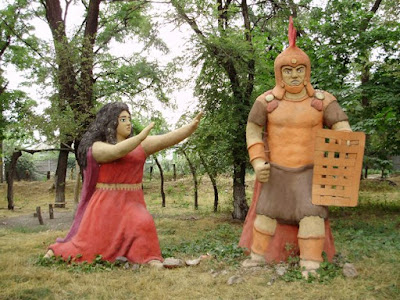 Furthermore there are numerous sculptures in the park that depict biblical scenes such as the worship of the wise. A 3.5 m high sculpture depicts archangel Gabriel. 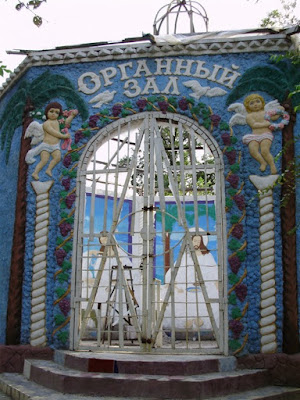 Another interesting creation in this category is the Organ Hall pictured above, which on its interior walls has a large painting that depicts Jesus and the disciples at the Last Supper. The depicted characters are some 2.5 meters high (see pictures on a weblog on nashizdat.com)

A variety of other sculptures

Apart from the sculptures related to a specific theme, the park includes sculptures with folkloristic scenes, scenes related to fairy tales or scenes depicting well-known social or historical happenings. 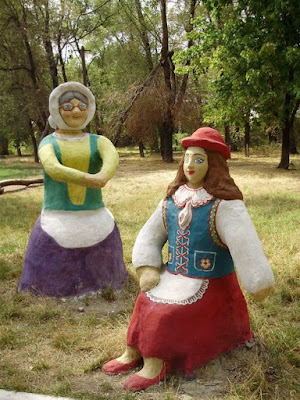 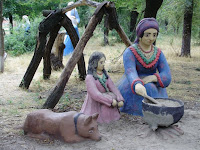 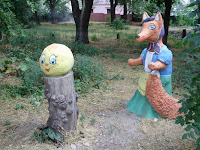 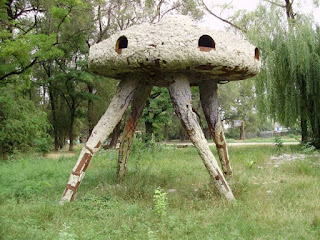 The sculptures are falling in decline

Raisa Ivanovna Kuznetsova, who had the leadership of the project for about ten years, passed away in December 2012.

Hereafter the project ended and in the course of time the collection of sculptures began to decay, partly due to the vulnerability of the sculptures and the lack of maintenance, but also because of deliberate destruction and the fact that some residents began to re-use the place as a landfill for waste.

Active groups of citizens in recent years have set up actions to jointly clean the park. However, if the local authorities take no action to protect the artworks, there will be no hope of maintaining the collection in the long run.

According to an article in Dnepr.news (march 2016) the city has budgeted resources for improving the parks, but then the park of the living and the dead first has to get the formal status of a city park.

note
¹ Babi Yar is a ravine in the Ukrainian capital Kiev, where during WWII massacres took place carried out by German forces and Ukrainian collaborators.

Park of the living and the dead
Vitchyznyana Street
Dnipro (Dnipropetrovsk until may 2016), Dnipropetrovsk region, Ukraine
link to Google maps
Posted by henk van es at 9:03 PM

Email ThisBlogThis!Share to TwitterShare to FacebookShare to Pinterest
Labels: park with a variety of sculptures, scattered art environment