The field of art environments in France has an interesting history with regard to self-taught artists who decorate their house and garden with mosaic, an history that involves various generations.

Before the second world war Ismaël and Guy Villéger were at its beginning when in 1937 they began decorating the exterior of their restaurant. They were followed by Raymond Isidore (= Picassiette) who in 1938 began decorating his house.

This post introduces Evelyne Dantel, who represents the contemporary generation.

Born in 1964 in Nevers, France, Evelyne Dantel after primary education studied psychology at the Faculté de Dyon, in the Bourgogne region

She got a job as a clinical psychologist at a specialized hospital in La Charité-sur-Loire, a historical town of some 5000 inhabitants situated along the Loire river in Burgundy, France.

Living in a small community in the rural area around La Charité, Evelyne's house has a fairly large garden. Around 2011 she began transforming house and garden into an art environment, both by adding mosaics to the various walls of the house and by embellishing the garden with a variety of sculptures, installations and other creative elements.


These creations were situated in various compartments of the garden which can be distinguished as petit jardins (small gardens), each with an own character.

So at the left behind side of the garden one finds the jardin des têtes (the garden of the heads), a circular arrangement of heads, which was finished around August 2016.

Another element is the garden gate with sides formed by wheels previously used in agriculture, all single-handedly welded together. This gate was finished May 2016. 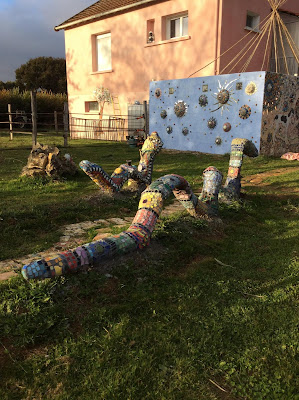 On the picture on top of this post one also sees a couple of multicolored, winding snakes, which approach a blue wall, the mur aux seins (the breast wall), created in earlier years.

Decorated walls of the house 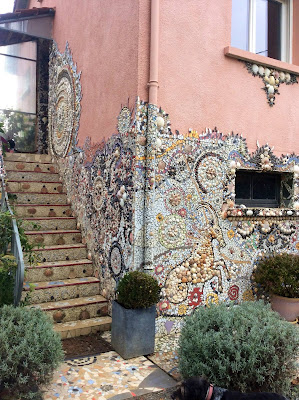 The walls of the living house have been decorated with colorful mosaic, such as above artwork, situated along a staircase on a corner of the building. The small pictures below show some details

These mosaics are made with pieces of tiles, broken crockery, shells, pebbles, pearls or buttons. 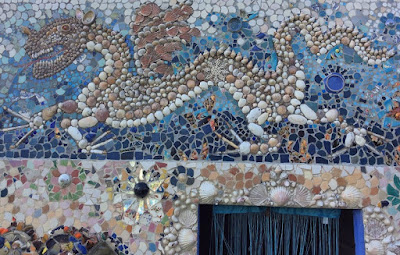 A dragon in a blue context on a wall is an impressive appearance. 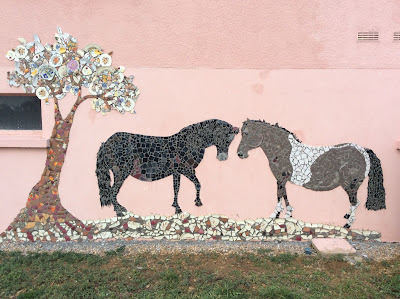 Later additions to this art environment include the couple of  horses shown in the picture above, and the tree below (below left as it was early September 2017, below right as it was in October 2017 and further below as it was when completed in May 2018). 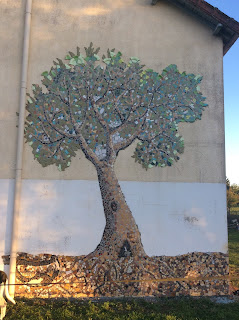 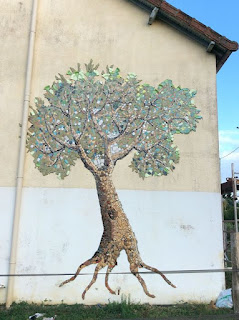 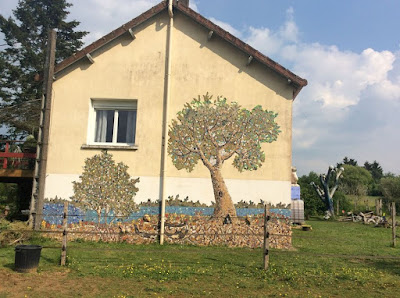 Evelyne Dantel's art environment has gradually become known via Facebook and in June 2016 for the first time the garden was open to the public on the occasion of a national open day of cultural sites organized by the French Ministry of Culture. In following years these open days would be repeated

In 2018, Evelyne Dantel began to provide the still empty places of the walls of the house with mosaics. The photo below (from Facebook) shows the situation at the end of November 2018. 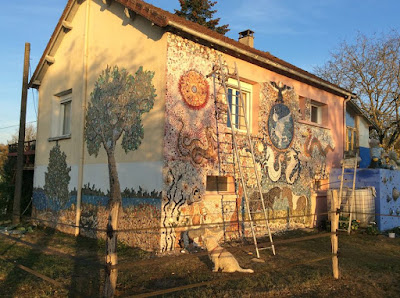 The next picture (from Facebook) shows the wall facing the garden as completed on December 10, 2018, a wonderful mosaic composition. 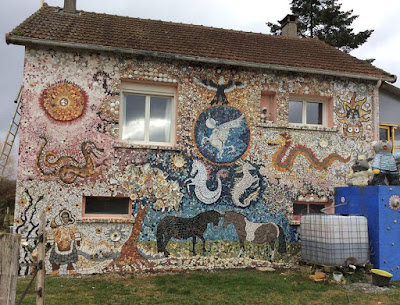 And the picture below (from Facebook) shows the side wall as completed in April 2019. 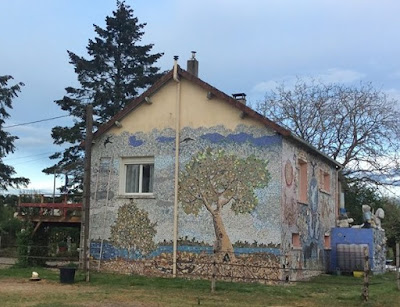 The downspout will still be painted in a suitable color. Evelyne's scaffolding is not high enough to reach the upper part and to provide this with mosaic.

And, as the photo below (from Facebook) shows, her work on expanding the decorative elements in the garden continues unabated. 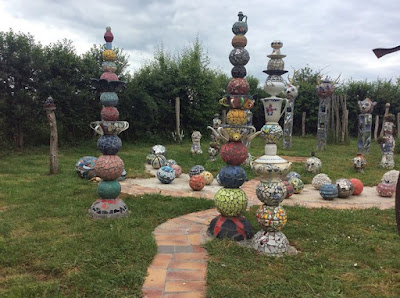 In the spring of 2020 a new extension of the decorations in the garden was completed with a haphazard collection of colorful spheres, as well as a number of pillars rising approximately 1.70 m high, formed by stacked multicolored, mostly spherical items, the whole situated near the garden of the heads.