Driving in the Aveyron area in France on the departmental road D285 from Belcastel to Mayran, after some 2.5 km one sees at the right side of the road above pictured scene, with small scale replicas of monumental structures.

It's not difficult to recognize the Eiffel Tower and the Arc de Triomphe. Left of the Arc is the Pyramid of Cheops.

These buildings form part of an art environment created by Abel Malgouyres, about whom the internet has no biographical information. Pictures show him like a man of age. A visitor of the site says he is a very nice person, who is delighted when people are interested in his creations. 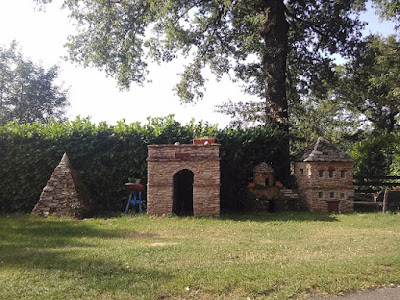 The site includes a number of replicas, partly of world-famous structures, partly of regional ones.

So there is the replica of the Eiffel Tower, but also (below, to the right) the tower of Ruffepeyre in nearby Mayran, which forms part of a monastery barn that belonged to the Bonnecombe Abbey in the community of Comps-la-Grand-Ville, some 40 km south-east of this art environment. 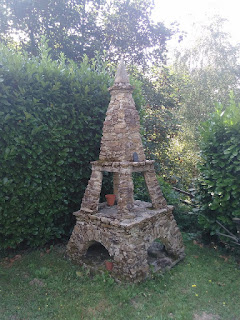 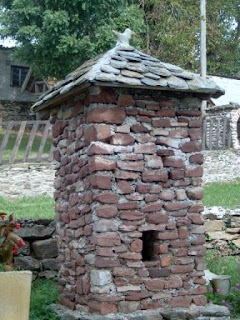 Apart from making replicas of towers and monumental buildings, Malgouyres also made replicas of a couple of bridges.

Pictured below is a bridge which as the accompanying plate says is le pont de la rivière Kwai (the bridge on the river Kwai). Based upon a French book by Pierre Boulle published in 1952, the movie The Bridge on the River Kwai appeared on screen in 1957 and became a great success (If Malgouyres has seen the film as a young man, he now must be in his late seventies). 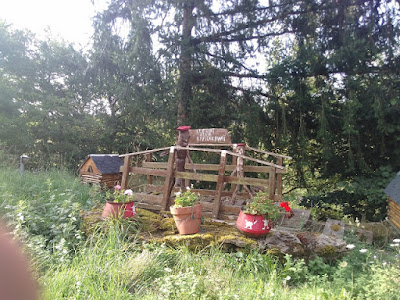 Malgouyres' chef d'oeuvre is the six meters long replica pictured below of the bridge over the Aveyron river in Belcastel, in reality a 57 meters long structure,  which was built in the 15th century and currently is classified as a historical monument. 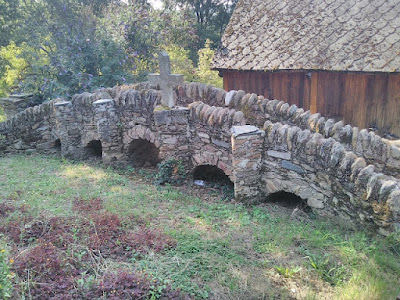 Pictured below is an ensemble referred to as Les quatre tours, consisting of a small bridge and four small-scale towers. 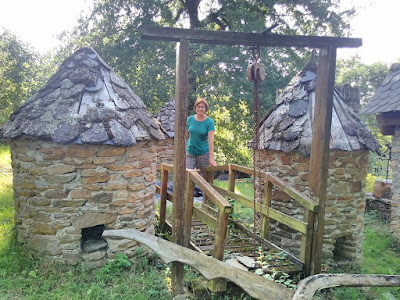 Malgouyres' art environment also includes a number of creations that depict small-scale scenes with an anecdotal or humorist character.

Here are some examples:

As self-taught artists who create art environments in France sometimes are referred to as les inspirés du bord des routes (the inspired of the roadsides), Malgouyres certainly belongs to this group, all the more now his creation extends along the departmental road and can be observed from that road.