Three wooden sculptures of well-dressed ladies welcome visitors at Cherepanov's art environment which he began to create in 2001 when he got retired and settled with his wife in the community of Visim (Sverdlovsk region, Russia).

Born in the late 1930s or early 1940s in Ilyinka in the Kirov region, Vitaliy Nikolaevich Cherepanov already at a young age showed a talent for creative as well as technical activities. Growing up in a rural environment in difficult times, as a young boy he for example made his own wooden toys.

As a young man he got a job as a tractor driver and mechanic in the agricultural sector, working there until he was conscripted in the military and for some four years was encamped in Kamchatka in the far east of Russia, where he was a mechanic on a submarine. 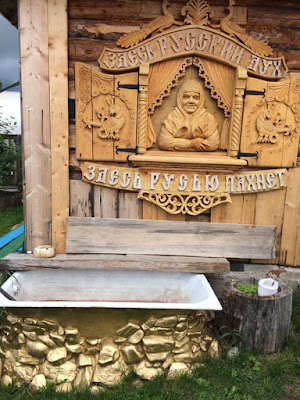 After military service Cherepanov settled in the 1960s in the city of Nizhny Tagil, an industrial center in the Middle Urals in the Sverdlovsk region. Here he got a job at a company in the field of metallurgy.

And here he also met his future wife, Nina Mikhailovna, who has an artistic talent in embroidery. 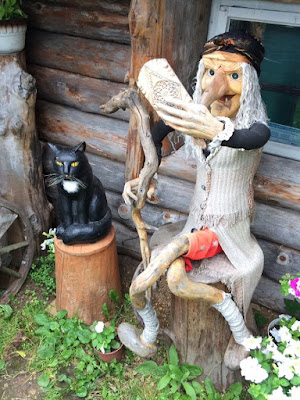 In his free time Cherepanov made wooden sculptures, paintings and decorations for the interior of his house. He also got some local fame by converting a normal Russian car (a Zaporozhets ) in a semi-sporty car of fairly modern design.

When Cherepanov got retired from work, the couple preferred to change the busy city for a more rural environment. So in 2001 they moved to the small community of Visim, some 50 km south-west of Nizhny Tagil (of which the village also is an administrative part).

Here Cherepanov found both the time and the space to fully express his creative talent.

Cheperanov's creative activities brought about a major transformation of his house and garden.

The elongated roof of the living house was fully decorated with a painting in pastel colors depicting a rural landscape. 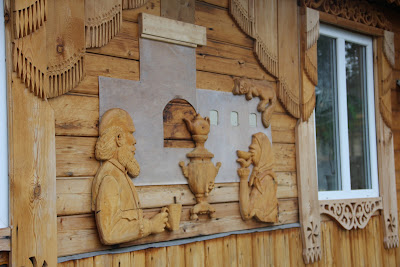 The exterior walls of the house and the gazebo were decorated with a variety of sculpted woodwork.

Thee are illustrative scenes, such as in above picture the portrayal in high relief of a couple enjoying a drink, alternated with decorations with various geometric patterns, as often can be seen on old Russian farmhouses.

In front of one of the walls two life-size wooden warriors or guards with swords are posted.

One aspect of Cherepanov's artistic activity gives this art environment its own specific signature: the series of life-sized wooden sculptures that are mainly derived from beloved Russian fairy tales.

So the various stories about the firebird, depicted above, often have to do with a hero leaving for a difficult quest after finding a beautiful feather of a bird.

And above pictured Pinocchio, originally a character in a book for children by the Italian author Carlo Collodi, published in 1883, also became a well known character, not least because of the Walt Disney movie that featured him. 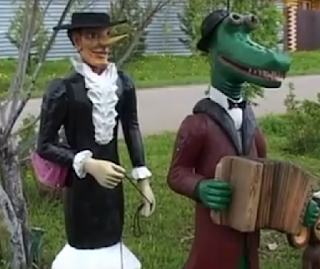 Other wooden sculptures include personalities that mainly appear in Russian stories, such as the lady in above picture. With her purse and outdated hat she probably is the old lady Shapoklyak, a character in a story by Eduard Uspensky. Her name is derived from the French name for a specific hat: the chapeau claque.

The crocodile with the accordion probably refers to a fairy tale by Korney Chukovsky, published in Russia in 1919 with the title Приключения Крокодила Крокодиловича (The adventures of crocodile Crocodile). 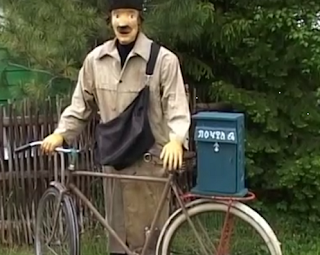 Cherepanov's wooden personalities also include characters from daily life, such as in above picture, which might depict the local postman on his daily round.

Begun in 2001, the site currently has become an integral part of the local community. Cherepanov and his wife are respected inhabitants of the village and Cherepanov even was awarded the title of honorary citizen of the community.

The site attracts a lot of interested visitors, both from Russia and abroad, who often receive a warm welcome.

The village of Visim has touristic potential because of its history, its location near a nature reserve and its various sights. The community already has a house-museum, where the Russian author Dmitry Mamin-Sibiryak lived.

Local authorities have suggested that the manor could also become an official house-museum, but Cherepanov and his wife feared that this would oblige them too much and they rejected the proposal..

* Article (July 2016) on touristic website Ural Map, with a large series of pictures
Videos
* Video by Sergey Shadrin (4'45", YouTube, downloaded June 2017), mainly showing visitors of Cherepanov's personal exhibition (2017) of his artworks in the home museum of Dmitry Mamin-Sibiryak, but also with shots of the art environment


* Another video by Sergey Shadrin (2'07". YouTube, downloaded June 2017), showing Cherepanov welcoming some visitors of his house and garden