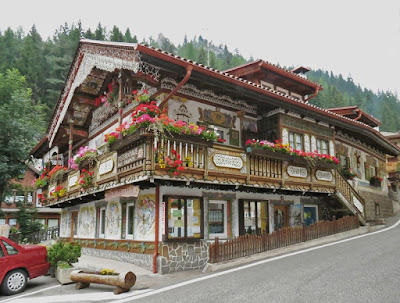 Canazei is a community of some 1800 inhabitants in the mountaineous area of the Dolomites in  northern Italy. Currently a busy ski resort, in earlier times it was a rural village inhabited by farmers and workers, among whom house painters who also decorated facades of local houses of which there are still good examples in the village. 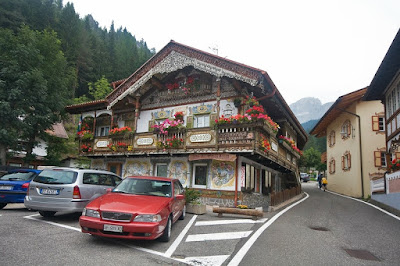 the side of the house facing the Piazza S Floriano

Born in 1950 in Canazei and grown up there, Debertol as a young boy already showed his artistic qualities, like at age nine he decorated an interior wall of the parental home with a landscape including Snow White and the seven dwarfs.

Decorating the house became a project of decades, which resulted in an abundantly decorated  house, both inside and outside. At the outside the exterior walls are fully covered with frescoes,
woodcarvings and wooden sculptures..

The project is dedicated to Saint Florian, the patron of the community. 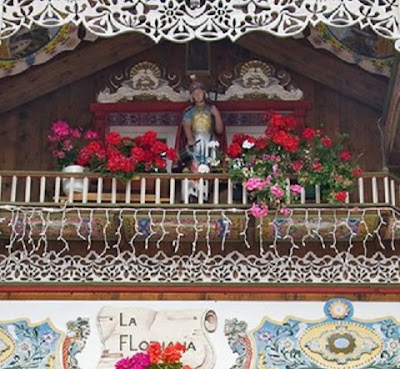 On above picture the saint can be seen, standing front center, just below the overhanging roof, on the upper balcony at the side of the building facing the S Florian Square.

Saint Florian is widely venerated in central europe as the saint who protects houses from fire.

In  Devertol's wooden sculpture he is depicted while giving water from a can. 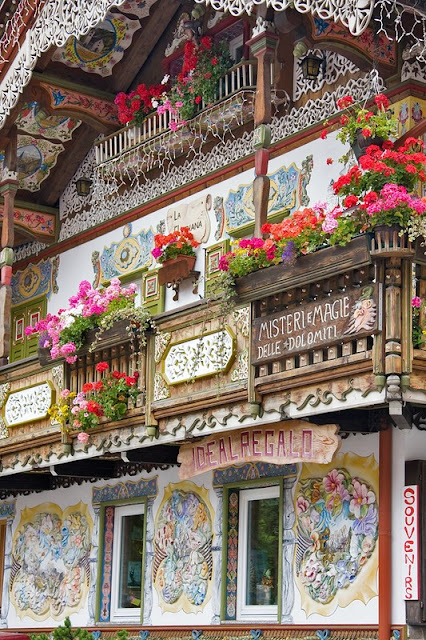 The picture above gives an impression of the facade as a whole.

It has a rich decoration with woodcarvings, but also a larger number of frescoes which are also applied to the underside of the overhanging part of the roof. 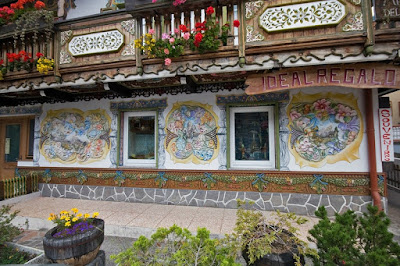 Mostly encircled with floral motives, the many frescoes that decorate the exterior walls depict religious themes, dolomitic landscapes, flowers, birds or churches located in the region. 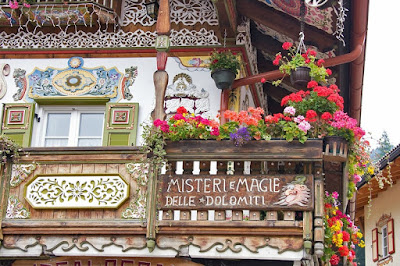 The village of Canazei is located in a northern area of Italy that borders Austria. The traditional buildings in the community, in former times mostly used as farmhouses or workshops, have an architecture that corresponds with the architecture of farmhouses in western rural Austria. 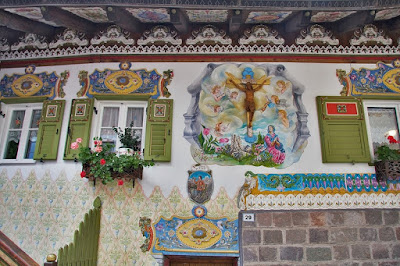 Characteristic for these buildings are a stone base, a wooden superstructure and a steep, pointed and overhanging wooden roof that is suitable to carry and discharge large loads of snow.

As far as I understand Debertol's house formerly was a mill, which he himself converted into a house, both to inhabit and to use for other activities, such as Debertol's studio, a therapeutic practice of his daughter Gladia Debertol and a shop with souvenirs and regional products. 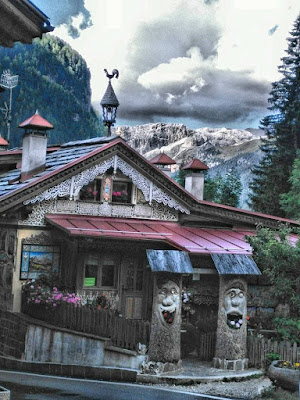 As can be seen in above picture, the short side of the house, farthest from the village center, has a small patio and an entrance flanked by two characteristic wooden sculptures, evidently made of logs.

Debertol regards these as the guardians of the property. 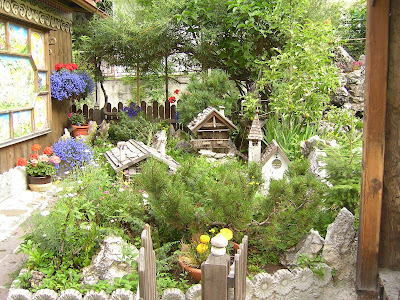 Not visible from the street is a small garden on one side of the house, which contains a number of miniature buildings made by Debertol. 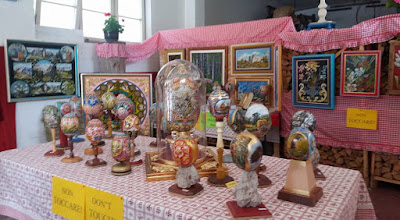 Apart from decorating interior and exterior of his house, Debertol llkes making paintings on canvas, including painting landscapes such as those found in the area. Another favourite activity is decorating eggs or egg-shaped models.

Above picture shows a selection of his visual art as shown on a local exposition in 2016 in the context of Canazei's yearly festivity Te anter i tobié (In the middle of the barns, The name of the festivity is in Ladino, the language spoken by the people of the Roman Empire, crossed to the north via roman soldiers and currently still used in Canazei in daily routine).

note
¹ The internet mainly has short (touristic) referrals to this art environment. Only Giada Carraro published a more detailed description of the creation (see documentation) and I would like to acknowledge that some factual information in this post is based upon Giada's work.