In above picture it looks as if the framed paintings as such were attached to the outer walls of the house, but the opposite is true: the paintings were painted directly on the walls and later the frames were added.

This house, decorated by Spartak Kudukhov¹ has become a landmark in the Russian city of Borovichi, located about halfway between Moscow and St. Petersburg. 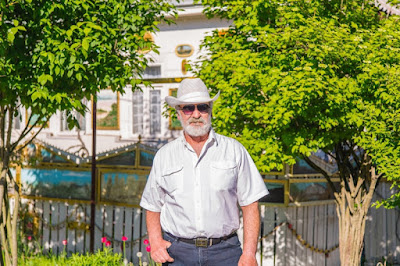 Kudukhov was born on March 8, 1951 in a rather small village in Georgia in an area not far from South Ossetia. Already at a young age he felt he had to become a visual artist and although his father didn't agree at all with such a prospect, the young man persevered and earned enough money to enter the Art College in Tskhinvali, the capital of South Ossetia, currently an independent republic recognized by Russia.

After his studies, Kudukhov got a job as a drawing teacher.

Later on he moved to Vladikavkaz, the capital of Northern Ossetia-Alania, a large, industrious city at the foothills of the Caucasus Mountains, where he worked in a factory. 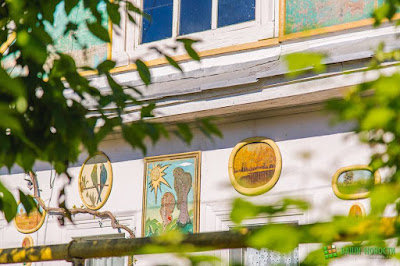 Then, in 1979, when Kudukhov was in his late twenties, together with his sister he moved north, to settle in Leningrad (from 1991 on St. Petersburg).

Here he probably manifested himself as a visual artist, because his artistic qualities gave him a job as restorer of paintings at the Hermitage Museum.

Whatever the case may be, as he stayed longer in St Petersburg, he wanted to be more independent, he sought rest and he wanted more time to make paintings.

So in 1995 Kudukhov left his room in St Petersburg and moved to Borovichi, a town with some 54.000 inhabitants, where he didn't know anyone and had no relatives or friends. 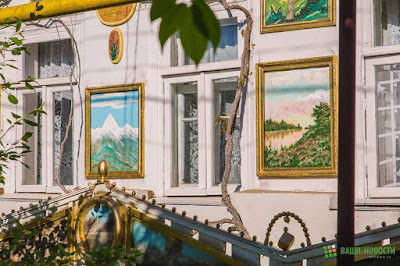 The house he had bought was fairly dilapidated, so he first had to restore it, a big job he took care of himself.

Kudukhov was a man of art, he liked to read and to write, to make poems and create visual art. Working with daily problems he considered a waste of time. But it so happened that he actually was confronted with the daily reality, when up to three times thieves evaded his paintings and furnishings

These events inspired him to add his paintings to the outer walls of the house in such a way that theft would no longer be possible.

Gradually Kudukhov's house on Sergeya Lazo street was transformed into an art environment. His paintings generally show images of landscapes such as those found in the vicinity of Borovichi. 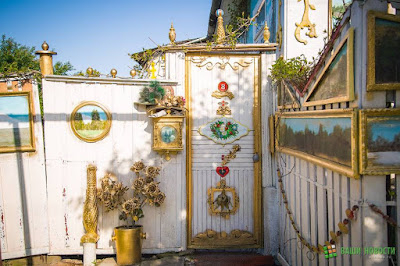 Today, Kudukhov's decorated house is generally seen as an enrichment of the city. Around 2005 local and regional news media began to write about the site and its creator.

In recent years Kudukhov has become fully established in Borovichi. He worked as an artist for various firms and companies and he was a teacher at a local high school. Currently (2017) in his late sixties he is retired, but he is still active in artistic terms, like he became involved in the restoration of the old paintings in the Trinity Cathedral in Bologoye, a town some 80 km south of Borovichi.

In the spring of 2017 Kudukhov had an exposition entitled Talent is always a joy in the museum of local history of the city of Khvoyninsky, a town some 80 km north-west of Borovichi. About thirty of his paintings, mainly showing landscapes, were exposed.

note
¹ Although Kudukhov was educated as an artist, in my opinion his decorated house deserves to be included in this inventory, because he is an artist by nature, whose way of creating an art environment fully fits in the way of working of those self taught artists presented in this weblog (passionate, without assistents, non-commercially)