Poland has a vivid array of artists and institutions in the field of folk art, and it also has a number of art environments, like Chelmowski's site, referred to as an open air museum in Poland.

Józef Chełmowski (1934-2013) was born in a family of farmers in Brusy Jagli, a small community in the north-west of Poland. He grew up in the tradition and values ​​transmitted in his family from generation to generation and all his life in his daily conversation he would speak Kashubian, the language of old in the area in northern Poland where he lived.


Already as a young boy at school he liked painting and sculpting. The teacher let him do this. He gave me freedom, so I worked and painted. Nobody taught me, the teacher was not capable of teaching me. I had to discover it all by myself, Chelmowski says in the video with English subtitles in the documentation below.


He completed his primary education, but could not pursue further studies because of illness and the need to assist his parents in running the farm.

Chelmowski later had a variety of jobs, such as ticket controller in a cinema, porter, lab technician or bee-keeper.

But throughout all these years, as a self-taught artist, he remained active in painting and sculpting, mainly creating works on religious, philosophical, moral or patriotic themes.

He became a versatile artist, who not only designed visual art, but also wrote a number of books and constructed installations, such as a machine for capturing the elements. 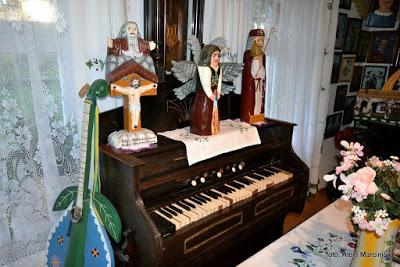 In 1972, when he was in his late thirties, he decided to share his work with the outside world and submitted it to the competition folk sculpture of Northern Poland. His work was appreciated and since then he has participated in all major events in the field of folk art in Poland.

Currently various Polish regional museums have his work in their collection, such as the Ethnographic Museum in Toruń, the Western-Kashubian Museum in Bytow and the Leon Wyczółkowski Regional Museum in Bydgoszcz, which has the largest collection (some 500 works), including Chelmowski's imposing creation the Apocalypse, a 55 meter long and one meter high painting depicting scenes of John's biblical story.

In the late 1970s Chelmowski transformed the garden on the backside of the parental home into an art environment. In the mid 1990s, when Chelmowski's fame was widely spread throughout Poland, the site attracted visitors, initially from Poland, but later also from Germany and Scandinavian countries. 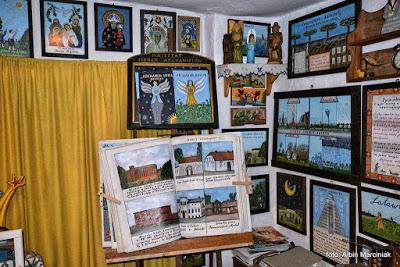 A number of walls of the interior spaces gradually got fully filled with his paintings. In the interior one also finds his illustrated books. 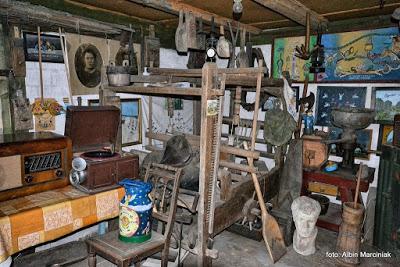 In some rooms all sorts of tools and household items were gathered that had to do with daily life in former days, such as old radios, telephones and gramophones, farm equipment, but also old-fashioned billboards. 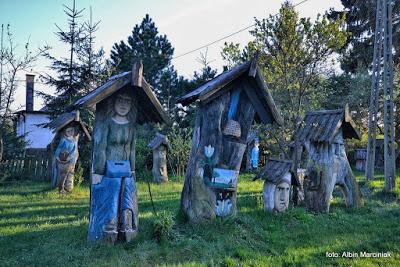 The garden at the backside of the house includes a large collection of Chelmowski's woodwork. Very prominent are the small road chapels, arranged in parallel rows.

These are a well known and widespread phenomenon in Poland. Chelmowski has delivered many of such little chapels on order, but it is very satisfying that in the garden a large number of these creations have met. 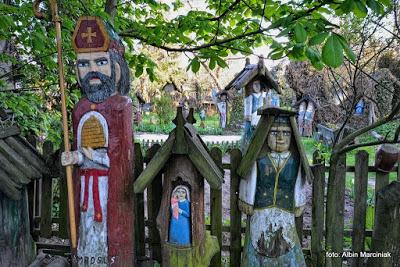 The garden also includes beehives and a variety of sculptures depicting saints, angels. farmers, robbers. The exterior walls of the house and the outbuildings are decorated with frescoes. One of these frescoes has the inscription Światło Czas Duch włada życie which as far as I understand means Light, Time, Spirit, its life.... 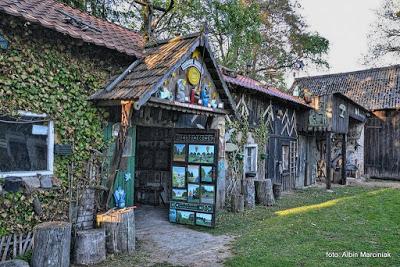 The entrance to the house is decorated with paintings and carvings. The tympan above the door contains sculptures of Pythagoras, Copernicus and Archimedes ..

In 2006 Chelmowski was honored with a Polish cultural award, the silver medal of Gloria Artis.

After Chelmowski died in 2013 his widow Jadwiga Chelmowski, assisted by other members of the family, took care of the open air museum.

In the night of August 11, 2017, house and garden were hit by a heavy storm that caused damage to the house and fences. The works of art have been spared for a significant part, but it has been shown how vulnerable they are.

In the autumn of 2017 first activities started of a project of the family, the Western Kashubian Museum and a number of volunteers to renovate the art environment in time. A first action included the moving of the most vulnerable sculptures and wooden constructions to a covered area on the site, where they can safely survive the winter