Above picture shows a site, kind of a museum, which could be visited around 2009 in the Russian city of Izhevsk. Meanwhile this café-museum has disappeared. The museum's collection as such still exists, but is ambulatory and the owner is looking for a permanent place.

The collection is the life's work of Alexander Dvoretsky, who was born in 1956 in Krasnoyarsk, a large city in Siberia. After his primary education he went to work in a factory that produced worsted yarn. About his other employments nothing is known, as it is also unknown when he went to live in Izhevsk.

Anyhow, in the 1980s something happened that would give an important turn to Dvoretsky's further life. In one way or another he became in possession of an old debt letter, dating from the early years of the Soviet Union, which triggered him in such a way that he began collecting objects that carried the memory of the years of the USSR.

His collection grew and grew, up to currently some 30.000 items. many of small size, but also several of a rather large size, especially a collection of Russian cars from earlier years.

Although Dvoretsky was often approached to sell some items, in particular certain cars, he refused to do so, because he wanted to keep the collection together. His dearest wish was to exhibit it in a fixed location.

In may 2009 Dvoretsky could realise his dream. Together with his son he began a café, located in a small park in the city and open during the summer months. In the green area around the café he installed his collection.

The pictures above give some idea of the smaller items in the collection such as clocks, accordions, tape-recorders, decorative items, TV sets, radios, a variety of insignia and pins, football pennants, busts of Lenin, old money, bottles, samovars, plates, cassettes, bags, chairs, suitcases and of course these old cars and motorcycles from earlier years.

Unfortunately, the café-museum soon came to an end. After the first rental period the contract was not renewed and Dvoretsky had to start looking for another location.

However, a new permanent location didn't come available and Dvoretsky and his collection had to move from one place to another. The picture above and the two below were made in 2014, when the site was located on a spot near a cooperative garage along the Volkinskoye Highway in Izhevsk. 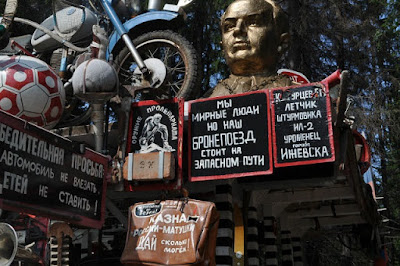 The images of the car make it clear that Dvoretsky has a way of presentation which is not focused upon presenting the specific character of each individual item. He rather presents a total image in which the various objects form part of a larger colorful whole, are provided with decorative inscriptions or serve as support for other elements in the presentation. 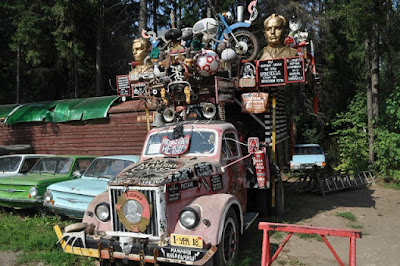 Below are some more pictures of the decorated car above. They were taken in 2012 during open air festivities on the occasion of the day of the city of Izhevsk.

The pictures show that the red car is part of an installation which apart from other items also includes another car and a motorcycle standing on a roof that in turn is backed up by ten uprights. A car showroom wouldn't present the models in such a way.

Dvoretsky creative way of dealing with the objects he has collected, combining these in a non-obvious way, adding text signs, transforming some items into an installation, implies that the entire display of the objects can be seen as an art environment.

The search for a permanent place continues

Dvoretsky continues his efforts to get a permanent place for his collection, although the local authorities show little inclination to cooperate. In 2016 he wrote a letter to Vladimir Putin, the president of Russia, to get his cooperation.

To my knowledge currently Dvoretsky's collection is housed on a small parcel near a forest at the outside of Izhevsk.

It was reported  that Zoya Lebedeva, a well known artist in Russia, is interested in Dvoretsky and his collection. In consultation with her a plan would be considered to situate the collection on a rented plot in the community of Buranovo, some 30 km away from Izhevsk (Buranovo is the hometown of the Buranovskiye Babushki, a folk group that represented Russia in the 2012 Eurovision Song Contest).

Other reports (end 2016) say that Dvoretsky is disappointed about the lack of cooperation of the local authorities and considers to sell the collection. To my knowledge in 2017 and 2018 the internet had no reports about further developments.

Documentation
* Article (January 2010) on Live Internet by Izhevchanka about the Cafe-Museum
* Article (June 2016) in local newspaper Susanin,news with a large series of pictures (This article reports about Dvoretsky's letter to president Putin)
* Article (November 2016) on the website Day.org saying that Dvoretsky, disappointed about the lack of cooperation, is considering to sell his collection
Videos
* Video of the Café-Museum by Tatiana Vasilievna (7'15", You Tube, sept 2009)