The two frescoes on the street side of the house (by car you would pass them in a flash) just form a small part of the total number of frescoes included in this art environment that's located in the neighbourhood Launoy in the community of Blennes, France.

These frescoes were created by Gérard Claeys (1927-2015), who had a career with the French army. He was involved in the war of France in French Indochina (1946-1954) and he later served in French Guiana, currently still an outermost region of France.

Retired from the army in 1972 he settled in Blennes, where he first remodeled the house he had acquired, after which in the 1980s he started decorating it. 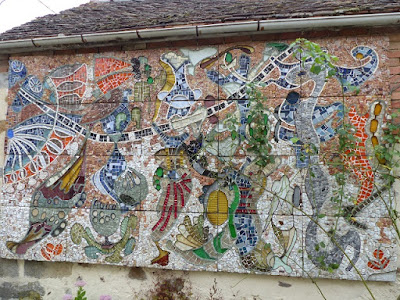 the inner side wall of the annex


The short sides of the house and the annex face the street, the inner long sides surround an elongated courtyard, while the long outside of the annex flanks a side street.


All together a large area of walls, which Claeys gradually completely covered with mosaic frescoes.

As can be seen on the pictures, the wall decorations are constructed from rectangular plates.

Claeys designed his decorations on paper, after which in his workshop he transferred the sketch to the plates. Then he applied the scene with mosaic on the plates, after which he fixed the plates to the appropriate wall.

In his mosaic creations he applied a variety of materials, such as fragments of glass, tiling, earthenware, marble, sandstone, flint, mirror glass and seashells. 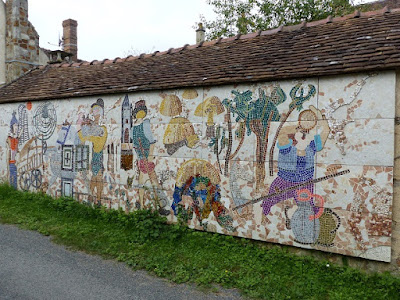 The scenes Claeys portrayed in general are rather realistic, such as people in all kinds of situations, possibly farmers and peasant women, but also helmeted figures who could represent warriors or knights.

The next images give an impression of the decorations that are applied to the walls along the inner court between the house and the annex. 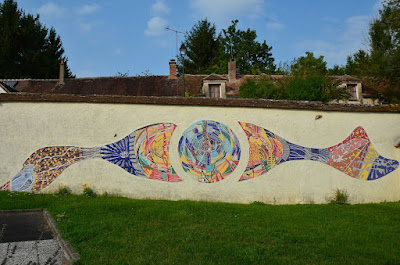 To date, the work of Claeys knows no mention in the usual French publications about art environments and there are no interpretative discussions of his creations available on the internet. 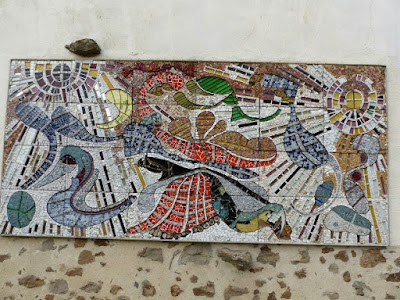 To my knowledge Sophie Lepetit is the one who recently on her weblog for the first time brought this art environment to the attention of the general public.

Apart from decorating the walls of the property, Claeys has also bee active in making stand alone artworks. He made a variety of drawings, paintings, mosaics, low reliefs and wooden sculptures.

After Claeys died in 2015, his artistic legacy is cared for by his widow Claudine Claeys

* Two entries on the weblog of Sophie Lepetit, frescoes on the walls (January 29, 2018) and paintings/sculptures in the interior (January 30, 2018)