The picture above shows the temple of all religions, a singular architecture located in the small community of Staroye Arakchino, a suburb of the city of Kazan in the republic of Tatarstan, Russia. The story of this complex of church buildings is closely related to Ildar Khanov, but his younger brother Ilgiz Khanov, born in 1948, is also involved in this site, especially after Ildar's death.

Ildar Khanov (1940-2013), born in Staroye Arakchino, as a child had a near-death experience in which he saw Jesus, who sent him back to earth saying that the boy was needed there. Although in relation with this experience Khanov developed skills as a healer and also acted as such, he opted for a career as a visual artist. He graduated in 1960 from the Kazan Art College, then studied until 1968 at the Moscow State Institute Surikov. In the same year he was admitted to the Union of Artists of the USSR.

Until 1994, the year his life took a different turn,  Khanov was a productive artist, creating hundreds of paintings and a variety of monumental sculptures. In those years he also visited India and Tibet, immersed himself in Eastern medicine and Buddhism.

With the famous Russian artist Swetoslav Roerich (1904-1933), who spent a large part of his life in India, he discussed the idea of building an ecumenical temple, an impracticable plan in the then USSR. 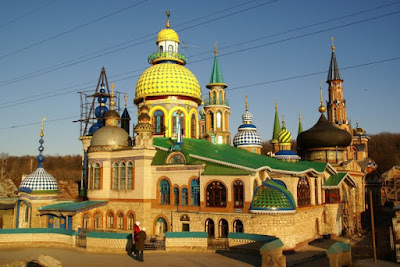 That changed when in the early 1990s the Soviet Union collapsed and in 1994 the time was there that Khanov would start to realize his plan.

The story goes that Khanov had a dream in which Jesus appeared who ordered him to build the eucumenic temple, whereupon Khanov began to level the terrain outside the parental home and in a short time a friend came by who promised to send 15 masons to assist him in doing the job.

Ildar Khanov's brother Ilgiz has related that the earliest beginning of the temple complex was in the late 1970s. Then Ilgiz built a fence around the parental house with a part from stone that later became the wall of one of the temples and when Ildar in 1994 began his construction, two domes of the future building were already present.

The realization of the complex

Anyway, it was Ildar who in 1994 took the lead in the construction process. He had an education in visual art, but in the field of architecture he must have been self-taught.

As can be seen on above aerial picture the complex located between a main road and a railway line, in 2015 included a variety of buildings, covering a rather large area of some 6 hectares (14.8 acres).

Khanov undoubtedly got assistance in realizing the various structures. In publications about the temple complex there is talk of a foreman who was involved in the construction, as well as of the help of people from Khanov's practice as a healer.

Although the realization of the complex was not undisputed, it may be that in the purchase of building material Khanov got help from interested parties through donations in the form of materials or in monetary amounts.

However, decorating the exteriors and interiors of the altogether sixteen buildings, representing just as many religions, in all probability was done by Khanov himself. The domes, pinnacles and upright walls, usually provided with geometrically arranged patterns, are decorated in a multi-colored fashion or provided with mosaic. 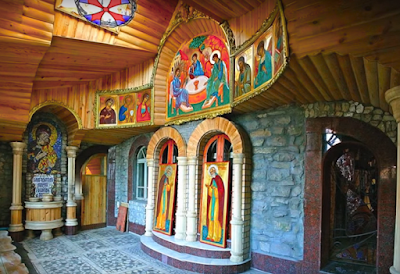 The indoor spaces have been embellished with frescoes and sculptures, in general with a religious connotation in line with the religion to which the building in question is dedicated. One encounters Islamic, Jewish and Christian symbols, a variety of flowers and rings and the Masonic eye is also present.

In furnishing the rooms use was made of materials or utensils that had become superfluous elsewhere. For example, the hall of the Catholic Church is furnished with chairs from a theater that renewed its original interior. Such venues were used, for example, for charity concerts.

When Khanov passed away in February 2013, the complex was not yet completed, but it had largely reached the size as indicated on the aerial photograph. This means that Khanov has done a great job in the almost twenty years he (with the help of others) has been active in creating the temple complex.

Khanov had legated the complex to his family, but the foreman who was involved in its construction thought that the complex belonged to him and confiscated it. The family started a lawsuit, which lasted for several years, until early 2017 judgment was made in favor of the family. During these years of legal battle some further architectural development of the Temple took place.

Then in the early morning of April 10 2017, the day before the foreman had to evacuate the site by court order, a large fire arose in the Temple, that damaged an interior area of some 200 m². It turned out that this fire was lit by the foreman, who was found dead in the temple complex.

Plans for the future

Ilgiz Khanov now took on the task of defining the future of the complex. First of all he arranged the repairing of the damage caused by the fire. Meanwhile some essential repairs have been carried out, but -as visitors reported- end 2017 the effects of the fire were still visible.

Khanov's plans for the future include a name change: the complex would henceforth be referred to as the Center of Tolerance. And then he aims to establish an art academy especially for children and also a renewed Taiwan Pagoda, which in his view might attract a lot of Russian visitors interested in East Asian architecture.

Behind the Pagoda a multi functional hall with a glass roof could be built in which all kind of cultural events could be organized. A specific feature of the future complex would be a building with three turrets, each with a symbol on top, an orthodox cross, an Islamic half moon and a symbol of the sun.

However, such plans would require substantial investments and although Khanov was convinced that the complex could attract many entrance-paying visitors, the approached authorities appeared reluctant to participate in investments, so it remains to be seen if these plans can be realized.

Currently the site can be visited, but just some six interior rooms are open to the public.

The Republic of Tatarstan in terms of tourist visits scored in 2017 the fourth place of regions in Russia (apart from Moscow and St Petersburg): 278,000 of whom 185,000 came to see with their own eyes the Kremlin in Kazan and the Temple of all religions

Videos
The internet has a variety of videos of the site. The following two give a good general impression:
* Video by Lyudmila Koledova (You Tube, 5'44 , September 2016)


Ildar Khanov
Temple of all religions
Staroye Arakchino, Kazan, Republic of Tatarstan, Russia
can be visited, but just a limited number of interior rooms is open for visitors
streetview (2012
Posted by henk van es at 7:16 PM