The river Tagus (rio Tejo in Portuguese), with its length of a thousand kilometers the longest of the Iberian peninsula, flows into the Atlantic Ocean near Lisbon, the capital of Portugal.

A walk along the quays of the city guarantees many beautiful views, for example the view of the Vasco da Gama bridge, the longest in Europe, but also - of a completely different nature- the sight of a modest art environment along the river as shown in the photos. 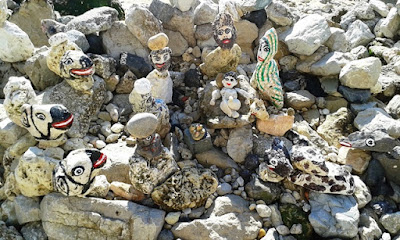 The site is located along a quay along the river named Avenida Ribeira das Naus, near the Cais das Colunas, a place along the river marked by two pillars. where high guests who travel by ship can be welcomed. 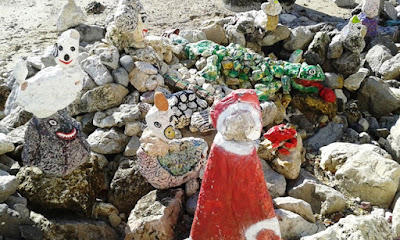 The sculpture project started mid 2016. Two pensioners, both in their early sixties and living in Lisbon, had met each other, and it appeared that both were interested in art as made by Picasso, Dalí or Miro.

They are known only by their first names, Míro and Pédro. Although both self-taught, they decided to try out to make sculptures themselves, especially by stacking and decorating stones. 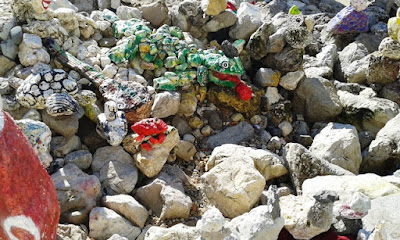 The place along the river, with an abundance of stones within reach, became both their studio and exhibition space.

Míro is the one who takes care of a balanced stack of stones, Pédro does the decorative part, using nail polish to bring forth the images.

They create sculptures with different dimensions, shapes and colors, and it always about a "balanced image with a touch of our magic and the magic of stone", as Pédro said in an interview. 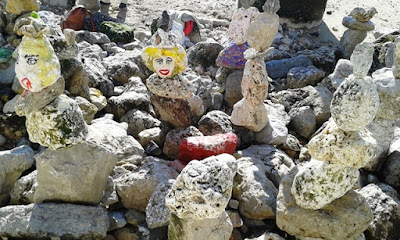 Currently (early 2018) Míro and Pédro have been actively involved in their project for over a year and a half and every day they come together at the waterfront to build new sculptures and to repair those that collapsed at night.

With their work they attract a lot of interest from the people coming along. The spectators are generally enthusiastic and sometimes make applause. 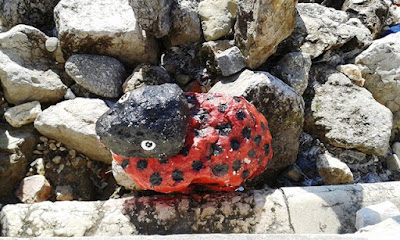 One of the charms of this collection of stone sculptures is the constant changeability: some sculptures collapse and disappear, new ones are added, others are repainted and given a different appearance.....

Of course, the vulnerability of this art environment is so great, that it undoubtedly will disappear as soon as the makers no longer will or can take care of it. In case this should happen, the entry in this documentation is a modest contribution to keep the memory of the site alive.

Míro and Pédro
Stone sculptures along the river Tago
Avenida Ribeira das Naus
Lisbon, Portugal
can be seen from the street
Posted by henk van es at 8:07 PM

Email ThisBlogThis!Share to TwitterShare to FacebookShare to Pinterest
Labels: display of sculptures made from stone, structures of stacked stones