The storks pictured above are part of a sculpture garden in the  capacity of a zoo, located in the middle of a residential area in the Belarusian city of Minsk. 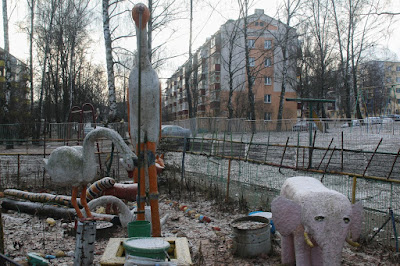 One day when retired, he and his wife Nikolaeva (who passed away early 2013) made a trip to the recreation area near the reservoir of Volchkovichi (Ptich), about sixteen kilometers south-west of Minsk. It so happened that during that trip he saw two self-made storks.

This inspired him to make such a couple himself. The result was certainly successful and Zhdan felt motivated to continue making sculptures of animals. 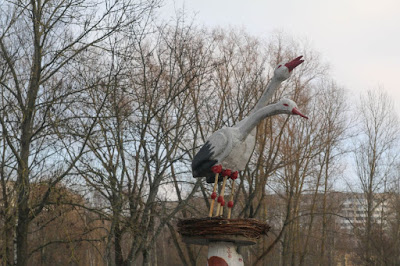 So these two storks marked the beginning of a project that started around 2008  In the following years it would result in a large variety of animals grouped in a part of a public garden near Zhdan's house. Currently (early 2018) the site includes over a hundred creations. 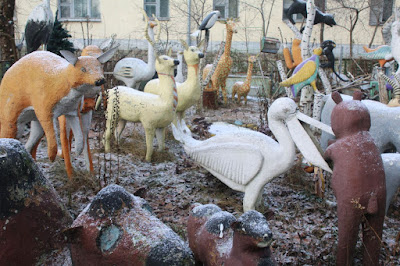 As basic material Zhdan uses polystyrene, occasionally supplemented with an iron frame or some wood for stability.

Polystyrene is a lightweight plastic that is widely used as packaging material during transport of refrigerators and similar household appliances. It is easy to work with a knife and objects made with this material are not so sensitive to weather influences. 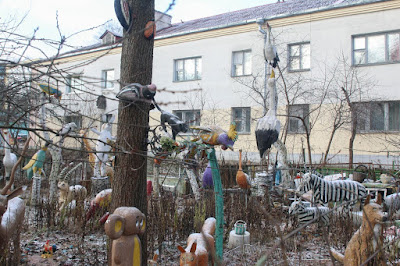 The zoo currently holds a lively collection of large variety of animals, like all sorts of birds such as parrots, cranes, pelicans and owls, various predators such as tigers and panthers, and of course zebras, panda bears, and so on.

In short, the livestock that one usually can see in a zoo. 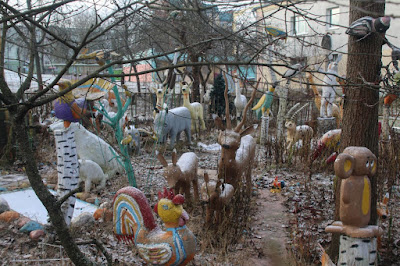 Zhdan's art environment generally is appreciated by the people living around. It is reported that the site hardly is affected by vandalism, although two storks have been stolen.... 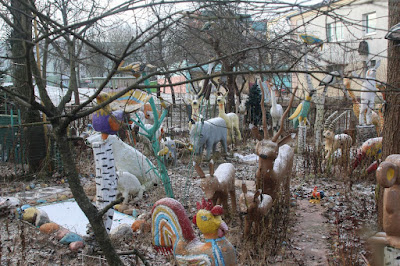 Email ThisBlogThis!Share to TwitterShare to FacebookShare to Pinterest
Labels: garden with sculptures from styrofoam