Now that in March 2018 the Lille Art Museum, France, has published it's website Habitants Paysagistes, illustrative material has become available with the effect that some new entries may be added to this blog. Like the following note about a by now disappeared art environment in Kremlin-Bicêtre, a community south of Paris, France

He liked to write poetry and other texts in Italian and he somehow considered himself a messenger of god with the mission to spread love and brotherhood.

When retired, around 1970 he began transforming exterior and interior of his house in Kremlin-Bicêtre into an art environment. 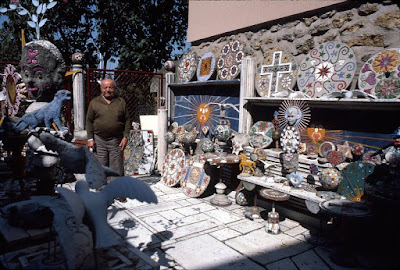 His artistic production in particular includes a large variety of colorful small-scale objects that almost completely cover floors and walls, such as self-made dolls, vases, small sculptures and other objects, often displayed on a variety of equally self-made pedestals and small tables.

For some creations cement was used and these items are often inlaid with pieces of mirror glass, marble or faience, like most exterior and interior floors were also decorated with mosaic in various patterns. 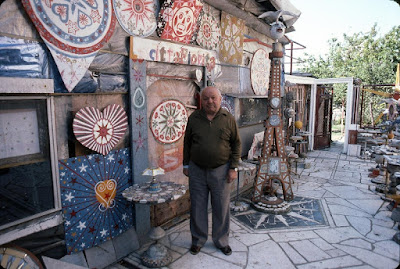 A rather special and characteristic part of Virgili's art includes a series of all kinds of circular creations, often decorated with mosaics or colorfully painted, which evoke associations with or symbolize the sun.

The exterior had various totems, poles with doves or weather-vanes on top and other structures such as a towery one as in above picture that is reminiscent of the Eiffel tower.

Some of Virgili's creations in detail

Francis David's pictures of the site as shown above, mainly provide an overview of the site. But it is interesting to look at some details of Virgili's creations,

The picture below, from the website of the ABCD-art brut collection, showing a pedestal/table made by Virgili, gives a good impression of the way Virgili decorated his creations with mosaic and small concrete structures. 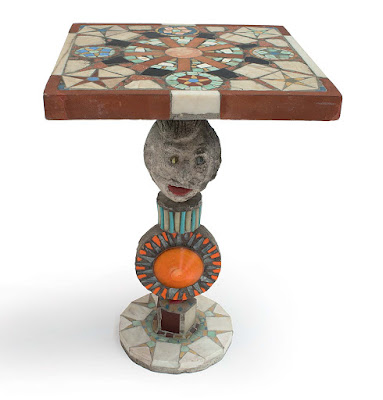 Also rather interesting is the story around Virgili's creation pictured below, a shining sun that has an accompanying inscription, saying LA RACINE fait pousser (the root makes grow).

This creation became the emblem of the French association l'Aracine, presided by Madeleine Lommel, which brought together an important collection of art brut artworks (currently in the Lille Art Museum) 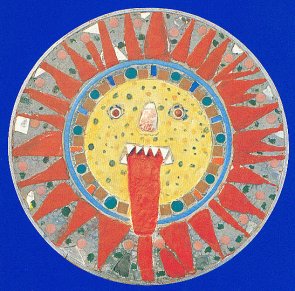 Madeleine Lommel explains in an interview ² with Jeanine Rivais that this emblem was chosen because of the expressiveness of the image and its title (for Virgili faire pousser also meant faire brisquer, which in English is something like to beak, to enrage or to make jealous)
The site has been partially lost, partly preserved

Virgili's art environment doesn't exist anymore. The small items generally are preserved, and have ended up at art dealers, in the collection of l'Aracine or other private collections.

The mosaics and similar decorations on walls and floors probably have gone lost.

notes
¹ The date of birth mentioned here is the one as stated in the article in the website Habitants Paysagistes and in the website ABCD-art brut; Wikipedia; mentions 1907 as birth year
² In this interview Madeleine Lommel also explains that l'Aracine means: Les Amis Réunis Autour d'une Création Intemporelle, Novatrice, Essentielle (The Friends Gathered around a Timeless Creation, Innovative, Essential)