In the field of art environments, it happens occasionally that for years a site is only known to the nearest neighbors and remains unnoticed by the general public. And then it can happen that at some moment a creation comes in the range of the radar, as with this art environment in Ukraine.

Valery Ermakov, the creator of this art environment, was born in 1938. Already as a youngster he was interested in creative activities, like he -after some instructions of his mother- at age five already decorated bird whistles made from clay.

However, there was no professional artistic career ahead of him. All his life he has been working as a design engineer. He got married in the 1980s and the couple settled in Poltava, a town of some 300.000 inhabitants in the north-east of Ukraine, located some 340 km east of Kiev.

In addition to his job, Ermakov in his free time developed into a self-taught artist, this with the support and encouragement of his wife. He made paintings and sculptures, but, perhaps too impatient to keep up, he attended just a few meetings of a course for amateurs. Eventually he got his information about art from magazines and tutorials.

Ermakov participated in the fair in Sorochinskyi, a famous market in his region and one of the largest in Ukraine with a lot of attention for cultural matters, but he was not inclined to sell his work at a price which, in his opinion, was too low. On the other hand, he would donate his creations to local schools and churches.

In 2007, after Ermakov retired, he and his wife moved to the  community of Panasivka, a very small village with just a couple of houses and without shops.

Here Ermakov had space and time to create sculptures and paintings and his wife could enjoy her hobby of gardening.

To make sculptures, Ermakov glues small pieces of styrofoam together and processes the raw material just with a knife. He finds his inspiration in the works of the author Nikolai Gogol (who by the way was born in a village in the Poltava region) and also in Greek and Roman mythology. 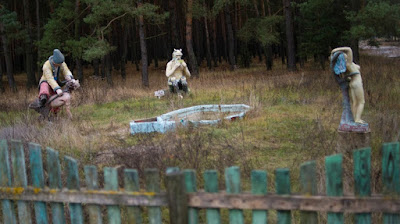 The outdoor artworks are partly grouped in a modest sculpture garden on the side of the house (picture above).

As the other pictures above show, this part includes a sculpture that represents Vakula, a character from a story by Gogol, another one that depicts the Greek mythological character Pan and a third one that depicts a female nude with blue hair, kind of a Greek goddess or a nymph, about whom Ermakov says that he doesn't know who she is....

Another part of the outdoor creations includes decorations on the front wall of the living house, especially a radiant yellow sun and a half moon (as in the first picture of this post). There is also a sculpture of a female nude sitting on a pedestal, placed just close to an outside wall of the house. 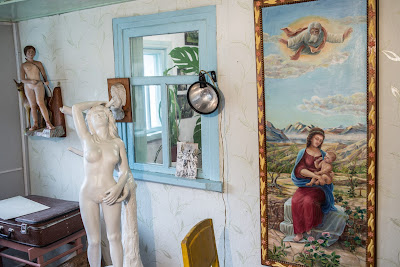 Above picture gives an impression of the artworks in the living room, a mixture of paintings and sculptures, set up amidst a large number of green plants, which keep alive the memory of his wife who tragically died in 2015.

The character with the bow and the arrow in the corner of the room as in above picture probably is a Cupido, as well as the one in the picture below. 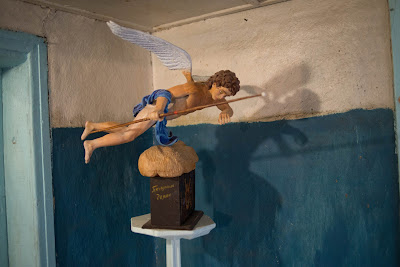 A rather interesting feature of the indoor collection is the sculpture of a lady dressed in a red robe.

Life-size depicted, the woman is at ease in front of a window, in such a way that it seems as if she is part of the household. To my knowledge, in the field of art environments there is only one other self-taught artist with a similar connotation, namely Bogdan Ziętek from Poland. 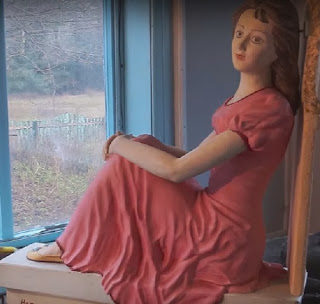 The Ukraïner project and the trip to Greece

As said, the art environment created by Ermakov from 2007 would have remained unknown if not a specific event had occurred. In his case, it concerned the activities of Ukraïner, a media project by a group of young Ukrainians led by Bogdan Logyvenko to share curious stories about the most distant corners, people, art, and food of Ukraine in order to offer information to the general public to get to know their country better.

A team of Ukraïner visited Ermakov and reported about him in January 2018. Recognizing his great interest in Greece, they started a crowd funding action to offer him a trip to that country. The campaign was successful and in March 2018 the trip took place.

Documentation
* Article Without models (January 20, 2018, in English) on website Ukrainer
* Report about the trip to Greece, with a variety of photos

* Video by Ukraïner (YouTube, 4'52", December 2017), subtitled in English, some nude sculptures, so the video can only seen on YouTube)
Valery Ermakov
Sculpture garden and interior with paintings and sculptures
Panasivka, Poltava region, Ukraine
sculpture garden can be seen from the road
Posted by henk van es at 7:38 PM

Email ThisBlogThis!Share to TwitterShare to FacebookShare to Pinterest
Labels: garden with sculptures from styrofoam, indoor arrangement of sculptures, interior decorated with frescoes/murals