Although the building pictured above has a pleasant appearance, at first sight there is nothing special about it, but looking at the more detailed photo below, one can see that this building is rather special, if only because of the way the facade has been decorated. 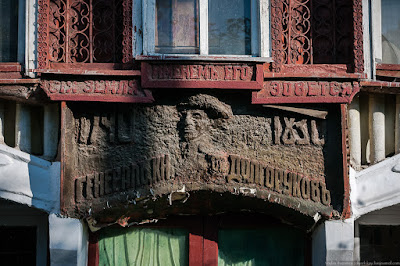 This is the facade of a museum in the village of Dolgorukovo, Russia, some 425 kilometers south of Moscow.


This museum has the rather unique feature that -apart from the hull of the building- all parts, structures and decorations have been made single-handedly by its director, Ivan Aleksandrovich Khristenko.


Nothing initially indicated that Ivan Khristenko (1930-2012) would become director of a museum. He was born in the Prikhidki village in the Poltava region (currently part of Ukraine),  graduated in 1957 in law at the Moscow State University and became a successful lawyer, first practicing in Moscow, then in the Ryazan region and eventually in the Lipetsk region.

Khristenko was a convinced communist and he was actively involved in committees and organizations in Lipetsk affiliated with the communist party, like he was a correspondent of the newspaper Path to Communism and a teacher of the district committee of the CPSU.

So when in the mid 1960s the plan arose to create a museum dedicated to the history of Dolgorukovo, where Khristenko lived, he became involved. The museum was formally established on October 14, 1967.

Khristenko was appointed as its director, but since the museum initially was located in just one room of the local CPSU, this in the beginning probably was an activity as volunteer.

In 1979 a building belonging to the CPSU with four rooms and an outside space of 2500 m² (10890 sq ft) was allocated as a new, more spacious housing for the museum and probably this was the moment when Khristenko began to devote himself full time to the further substantive and spacial expansion of the museum.

In terms of design of the space, these developments got a distinctive signature, incomparable with those of other museums. Khristenko began to fill the outdoor space with self-made sculptures and structures, creations he built up with the aid of cement and all kinds of surplus material found on the dump. The interior got all kinds of decorations, often made from paper mache, wall paper, styrofoam and other cheap available (waste) material.

In doing so, it came to a tremendous explosion of creativity, resulting in numerous works of art being added to both the interior and the exterior which in this way together were transformed into an art environment.

The history of Dolgorukovo was placed in a broad context and so there were sculptures of important persons in Russian political history, such as Vladimir Ilyich Lenin, the founder of the USSR, Michael Gorbatsjov, the last president of the USSR and Boris Jeltsin, the first president of the Russian Federation.

The village of Dolgorukovo in former times was property of the Dolgorukovo family. When in 1896 a railway was built, the station was named after the former owners of the village and so the museum also pays attention to this particular relation, as evidenced by, among others, the sculpture above that depicts the founder of the village, Prince Yu.V. Dolgorukovo.


Khristenko's interest in the Russian past is also reflected in the attention he paid to country estates. This can be seen in particular with regard to the (in Soviet times destroyed) estate of the brothers Zhemchuzhnikov.

The brothers Zhemchuzhnikov became especially known for the fictional personality Kozma Prutkov they created together with A.K. Tolstoj. In the middle of the 19th century Prutkov published numerous publications under this pseudonym. Especially his aphorism became well known.

One room of the museum features the brothers Zhemchuzhnikov and Prutkov's aphorisms appear on its walls. Although Prutkov did not exist, the museum just as well has a portrait of him and on the tower in the outdoor space he is -immortalized in a sculpture- looking at the spot where the estate once was located. 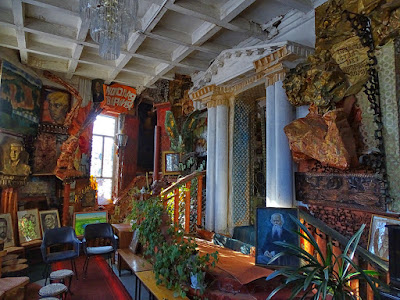 The interior of the museum includes 11 rooms and they all have been exuberantly decorated with pillars crowned with friezes, wall decorations, inscriptions or colorful paper mache items.

In some rooms just one specific theme is addressed, like there is room dedicated to the Great Patriotic War. Dolgorukovo was in a war zone and in the early years of the museum inhabitants of the village came donating pieces of war material, found in the area.

Another room is dedicated to the Soviet Five-Year Plans. 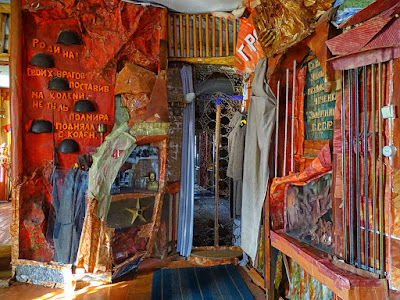 In July 2000, when Khrishtenko approached the age of 70, he transferred the management of the museum to his daughter Nadezhda Ivanovna Kryukova. Although over the years his health had declined, he continued his activities for the museum as an employee and so he remained involved in its policy.
Ivan Khristenko died in 2012.

The museum had as small professional staff, financed by the regional government. On average it was visited yearly by around 4000 people, who didn't have to pay an entrance fee. 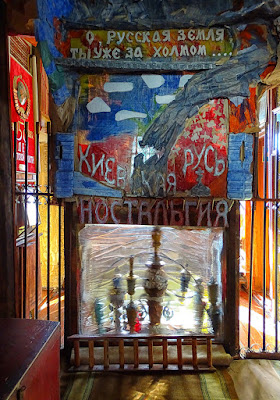 The financial situation of the museum became problematic, especially because there were no means to carry out maintenance. Khrishtenko never wanted to accept eventual contributions from funds or other private parties, because in his opinion the financial support should come from the central government. However, Moscow did not respond to requests on this matter.
The museum was closed in 2019.
An investigation into the architectural situation

In September 2020, the inspectorate of the Ministry of Culture and Art of the Lipetsk region visited the museum to assess the situation. It was noted that some technical problems need to be solved, such as renewal of the electric lines and improving accessibility for visitors with limited mobility. It was also established that it will be particularly difficult to restore Khristenko's creations to their original form.
It is not yet clear to what extent the necessary work will be carried out.
The museum in the field of art environments
People who visited the museum often said that it offered surrealistic or modern art. Since the phenomenon art environment in Russia is not very well known, it is not obvious that Russian researchers rank the museum within this conceptual framework, which elsewhere in Europe is gradually receiving more attention, accompanied by a growing appreciation for the encountered artworks.

From the perspective of the field of art environments the museum is a unique creation, comparable with some of the most important sites in France, Spain or Italy. It would be regrettable if this museum in the (near) future would cease to exist or would be "normalized". 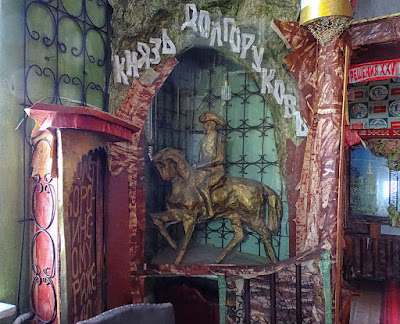 first published April 2018, last revised May 2022
Ivan Khristenko
Museum "Krai Dolgorukovsky"
Lihachova Street 24
Dolgorukovo, Lipetsk region, Russia
awaiting renovation, the Museum is closed
the museum is located in the center of the village, not far from the station
Posted by henk van es at 7:31 PM