Above picture depicts Diana Keys' sitting room in the house where she lived until her death. She rented this house from the municipal housing company of Hemel Hempstead, a town of some 80.000 inhabitants in the United Kingdom, just north-west of London.

Like other rooms in the house, the walls and the ceiling of this room have been decorated with frescoes she created single-handedly.

Diana Keys (1947-2018) began this project around 1977 as a therapy to curb mental health problems she experienced. 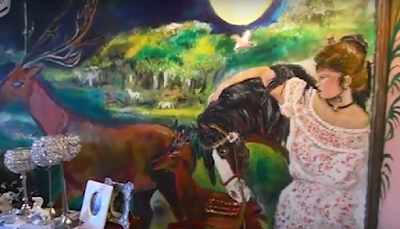 Using her own fingers in stead of brushes, she painted colorful, naturalistic scenes, depicting in particular many horses, but also other animals such as panthers, tigers and birds. And then she also depicted characters such as young ladies, saints and angels. A life-size mermaid is depicted on the wall of the bathroom.

On the whole, Diana Keys' frescoes decorated interior got a quiet, peace-loving appearance. 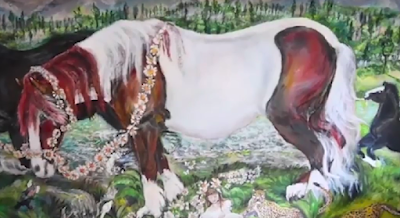 In the many decades that she was painting, she remained out of publicity, but in late 2017 she came out with her project, which led to a one-off avalanche of publicity with photographs and articles in a variety of English news media (Daily Mail, BBC, The Mirror and many more).

In interviews Diana has said that she wanted to end her project now she is seventy years old.

Living in a rented house, she also said that she realized that all walls and ceilings might be whitened if she no longer lives there. 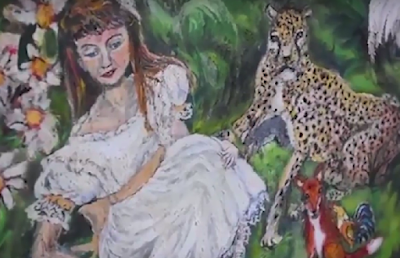 It is not known whether the murals in the rented flat still exist or meanwhile have been removed.

To my knowledge Diana Keys' art environment so far has not yet been documented in any British medium in the field of outsider art.

Documentation
As said this art environment in November 2017 got a lot of publicity in news media in the United Kingdom, all with almost the same descriptions and photographs.So just one referral will do:
* Article (November 10, 2017) in Mail Online

Diana Keys
Frescoe decorated interior
Hemel Hempstead, Hertfordshire, United Kingdom
it is not known whether the murals in the rented flat still exist