Sabile is a small town of some 3000 inhabitants, located along the Abava River in the western part of Latvia. It attracts visitors because of its beautiful surroundings, its annual wine festival and its garden with dolls, a site which in the field of art environments in Europe is rather unique.

This site was created by Daina Kučere, inhabitant of Sabile, born in the mid 1940s, a mother of four children and a grandmother of fourteen grandchildren. She had various jobs, such as waitress in a motel, and in 2007 she got retired. 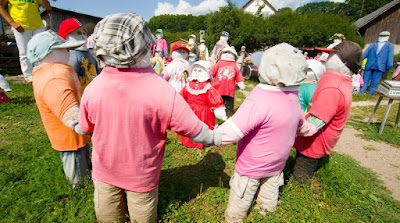 It all started in 2005. To uplift the celebration of the midsummer night, a beloved night of  festivities in Latvia, one of Daina Kučere's daughters came up with the idea to make some life size dolls. It turned out to be a success and Daina, at that time in her early sixties, felt motivated to create more of such dolls.

It became a a project that would keep her busy until the present day (2018). Already in the first years she made dozens of dolls, which got a spot on a grassy piece of land -in private property- along a main street of the town. Currently the site has some 300 dolls.

The site is open to the public throughout the year, even on cold winter days 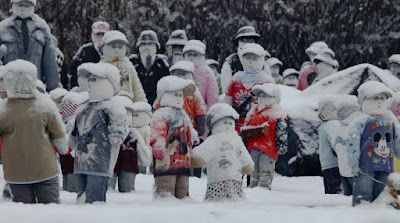 To construct the dolls Daina uses the format her daughter had tried out. She starts with a wooden cross-shaped frame, on which a fabric base is attached which will be filled with straw. With a wooden post attached to the bottom of the frame, the doll, once dressed, is firmly anchored in the bottom to the place it gets in the site.

Simple and cheap materials are used for the basic structure of the dolls. For example, since Daina can get the straw for free from a friend, she only has to pay the costs of transport.

What one sees are scenes from everyday life: postmen and other local officials in uniform, a lady in a dress in Latvian colors, another lady sitting behind a sewing machine and many, many children.... in a circle holding each other's hands, two-by-two in a row also holding hands...... 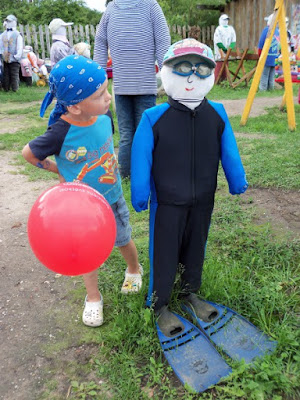 In the conceptualization of this art environment considerations of a historical nature have no role, neither was there apparently a need to represent certain nationally or regionally known events. It's all about activities close to home, in a nearby familiar environment

At the same time, observers have noted that the site can leave an impression of alienation or can be a bit unsettling. If so, this may have to do with the very sketchy applied facial expression and the presence of headgear on really every doll, which is probably needed to mask the effect of the internal frame.

In terms of outsider art environments, however, these elements just as well can be seen as charming aspects of the site. 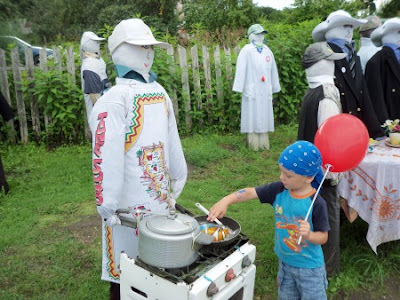 Situation of the site in 2022
The photo below, made by Tiramisu Bootfighter, shows that the site in September 2022 was still in a good condition 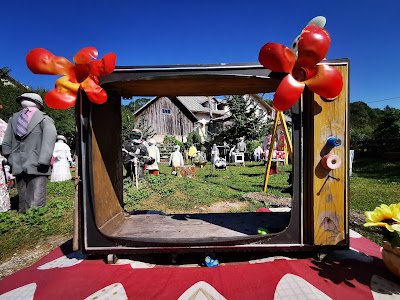