Some who wrote about Oļģerts Mikelsons (1927-2019) and his creative work have called him the Latvian Gaudi, but he himself has never supported such statements, although he agreed that both found their inspiration in a similar way.

Apart from this, with the creation of two art environments in succession, Mikelsons as a self-taught artist has done a great job, which until now has received little or no attention, especially outside Latvia.

Mikelsons' biographical data are still far from complete. He was born on January 10, 1927, participated at age 18 as a Latvian soldier in the second World War (where he was imprisoned too), graduated in 1950 from a construction engineering school and got married in the same year. He found employment as a civil engineer.

In the 1970s, living in the Latvian town of Jürmala, he began creating his first art environment, an activity that lasted until the beginning of 1983. Then he divorced, moved to neighbouring Riga, where he remarried and began transforming the premises of a church into his second art environment.

He was a faithful Christian, proud of his country, he loved music and has composed songs for a choir. The last couple of years his health deteriorated and he lived in a social care center. In 2017, together with members of the church, he celebrated his 90th birthday. He died in 2019.

The art environment in Jürmala

Mikelsons and his wife lived in Jürmala in an apartment building on Rigas Iela nr 4. They hired a small apartment on the ground floor and first floor in the left corner of the building seen from the street. On its backside the building faces the river Lielupe.

A characteristic of Mikelsons' first art environment is the use of pebbles as decorative material. One finds these pebbles in the entrance party of the apartment at the left side of the building. It includes a richly decorated staircase that leads to the first floor, as well as a decorated entrance at the ground floor with yellow doors (as pictured above).

Another structure decorated with pebbles is a mooring with a lantern pole in the river at the backside of the apartment building (picture above).

Mikelsons also made sculptures decorated with pebbles, such as the one in the picture above, which is inlaid with mosaics and portrays a lizard or salamander. Other pebble or mosaic decorated sculptures include portrayals of seagulls, a mermaid and a human couple.

Another characteristic of Mikelsons' art environment in Jürmala is the use of the color blue, as can be seen in the picture that shows the blue decorated outer wall along the street or in the pictures above and below which show a combination of pebbles and blue mosaic elements.

The house has served as a backdrop for a Russian detective film recorded in 1979. An article (December 2010) in Live Journal provides more information and also has a series of images of the decorations as far as present at that time.

The art environment in Čiekurkalna (Riga)


Early 1983 Mikelsons separated from his wife (a factor may have been that she was very outspoken in her dislike of his creative activities) and he moved to the Čiekurkalna quarter of Riga.

End May he remarried with a diacones of the local Evangelic Lutheran Church, a religious community Mikelsons had joined already in the 1970s and where he had met his new partner.

The church, which doesn't have the usual appearance of a Lutheran church, was built in 1928 and also included dwellings for disabled people and members of the congregation.

Once settled in Čiekurkalna, Mikelsons soon became available as a volunteer to help with the maintenance of the building and the garden, which led him -in line with his creative activities in Jürmala- to start making creations too.

There are no reports about the sequence of his operations. Perhaps the access party of the church (as in the picture above) with its towery pebble decorated structure on top of the stairs and its mosaic decorated front facade, belongs to one of the first works, 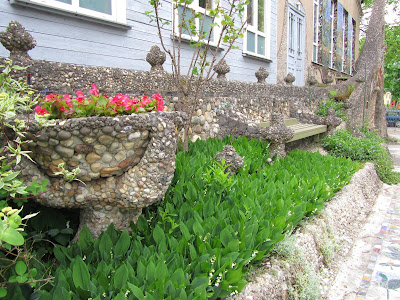 Mikelsons' predilection for pebble decorated items is also clearly visible in this second art environment, as demonstrated in the decorated wall depicted above and the sculpture below, part of the base of the bell tower, which also features a variety of inscriptions and green-tinted mosaics. 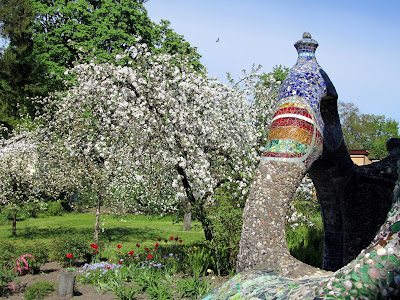 The decorative elements in the garden of the church include a large variety of multicolored mosaic, both on different parts of the ground floor, included a mosaic at the entrance of the site, and the also a variety of mosaics applied to structures and sculptures.

This art environment now also has smaller sculptures of animals, such as a cock and a cat with a mouse. 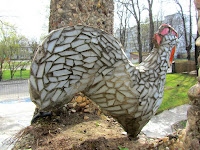 The most important structure, also seen from an ecclesiastical perspective, is the bell tower, as in the pictures below. This about seven meters high tower, decorated with a lot of green tinted mosaic and equipped with various inscriptions, was constructed in the 1990s.

Its base rests on a foundation that initially was part of a swimming pool which meanwhile has fallen into disuse.


In April 2017 the ensemble of decorations got a protected status when it was included in the National list of protected cultural monuments as an art monument of local importance.

On April 4, 2019 Oļģerts Miķelsons passed away.
Situation of the site in 2022
The photo below, made by Tiramisu Bootfighter in September 2022, shows that the site at hat time still is in good condition. 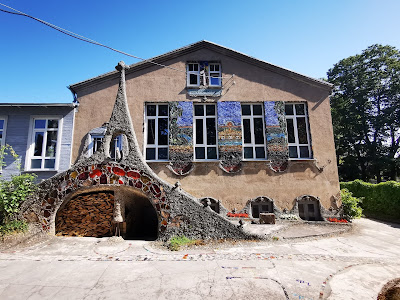 Documentation
* Rīgas Evaņģēliski luteriskā Misiones baznīca on Facebook
* On Live Journal (November 2010) an introductory article by Renate with pictures of the Jürmala decorations, followed by another article with more information and more pictures
* Also on Live Journal (November 2010) two articles by Renate with a description and a series of pictures of the decorations on the Čiekurkalna site, first article and second article
* And then on Live Journal (November 2011) a summary article by Renate about the two art environments, also with a lot of pictures
* Article (June 2016) on Latvian website IINUU about the Čiekurkalna art environment, with a series of pictures
* Article (undated) by Irina Mazurika on Baltic Travel Blog, with a series of pictures
Video
* Video entitles Schreyenbusch's Gaudi (YouTube, 2014, 8'31"), produced in the context of the Riga Summer School 2014, introducing Mikelsons and his creations at the site of the church