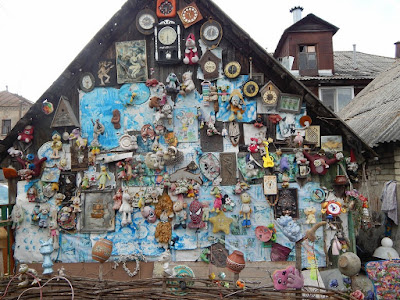 The doll-decorated front of a shed, as depicted above and below, can be seen in Kolomna, an old city in the Moscow region, Russia, about 110 kilometers southeast of the capital. 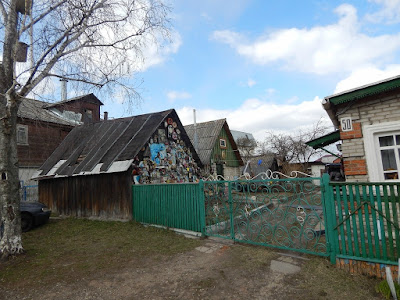 The dolls attached to the barn are only a small part of the collection of dolls assembled by Margarita Leonidovna Travkina, who was born in the early 1940s.

It all started in 2005 when she walked past a lot of rubbish and noticed that there was a discarded doll in that garbage. She took the doll home, washed and restored her dirty doll clothes, repaired damaged parts and gave her a nice spot in her house.

At that time Margarita Travinka was in her mid-sixties, she lived with her husband after her two sons got married and had left home. She was artistically gifted, loved embroidery and also made small paintings of special material, as in the composition below, where the basic material consists of processed shoe leather. 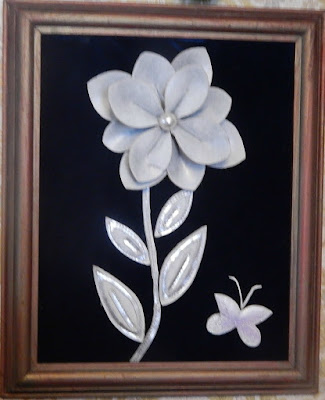 Repairing the rescued doll probably inspired Margarita Travinka to continue this kind of activity and so she asked friends and neighbors if they had old, disused dolls available. And indeed, they had......

It was the start of a project to which she would spend all her time in the coming years and that resulted in a collection that now includes 13,000 dolls. 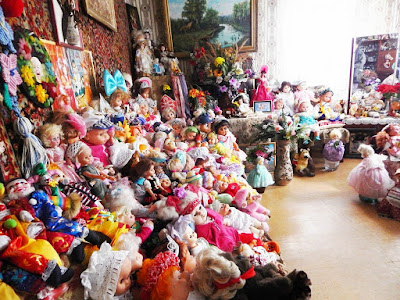 Indoors, the dolls are arranged side by side on chairs, benches, tables and other furniture.

They are all nicely dressed, their hair is cut, some wear hats. If female dolls have nails, these are provided with nail polish. 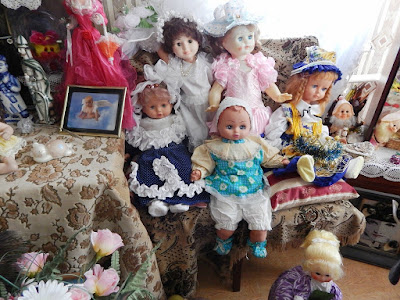 Margarita Travkina creates the beautiful and often richly decorated clothing of the dolls herself on the sewing machine. One garment takes about four hours to make, so this activity requires a large part of her daily time. This besides the time needed to clean the set up of the collection and keep it in order.

Her house has a modest size and includes only a couple of rooms, which means that almost all  available interior space is occupied by the collection. After her husband died some time ago, Margarita Travkina lives alone in the house. 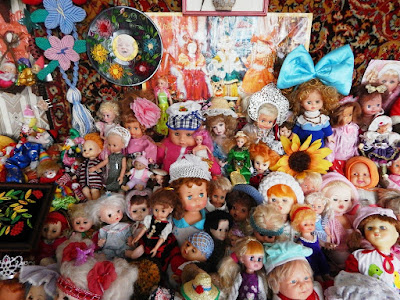 Unknown in which year, but probably in an early phase of the project, a small part of the collection of dolls has been attached to the front of the barn outside. These are generally smaller ones, made of rubber or plastic. The facade has also been decorated with a number of clocks.