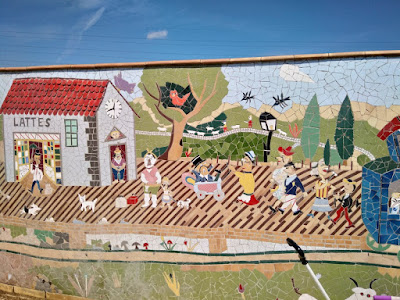 the station in Lattes
all pictures courtesy of Dominique Clément

Above pictures depicts the small station in Lattes, a stop in the train connection that existed for almost 100 years (1872-1968) between Montpellier in the south of France and the seaside resort of Palavas-les-Flots. The scene is part of a large elongated fresco from mosaic on a wall in Lattes,  a decoration dedicated to the historic train connection, created by Charles Roux and Alain Martineau.

This art environment has only recently become known after Dominique Clément discovered it by accident and devoted an article to it in his weblog Hérault Insolite of May 30, 2018. 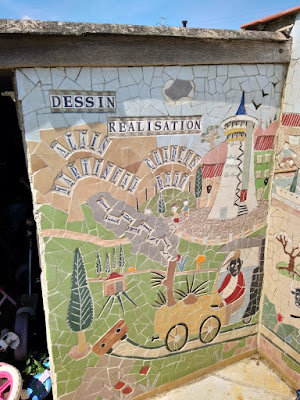 Currently, no factual data are available on the history of this creation. Also little is known about the makers, except that Charles Roux is a widower at age and that Alain Martineau is a family member.

The pictures show different parts of the creation on the wall which in reality is a whole that extends over the entire elongated wall. 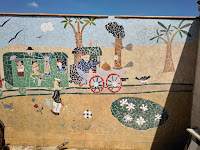 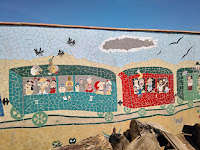 The wagons of the train carry numerous cheerful passengers, mostly on their way to the beach of Palavas-les-Flots, with the former French president Hollande in the  first class carriage . 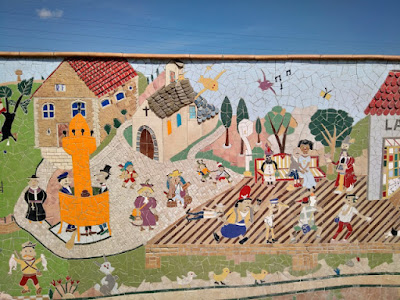 There are also many scenes from daily life in earlier times, with the Sunday lunch in the garden, campers in a tent at a meadow with grazing cattle, but also a flight of flamingos, someone who has lost his money in the casino and swarms of mosquitoes. 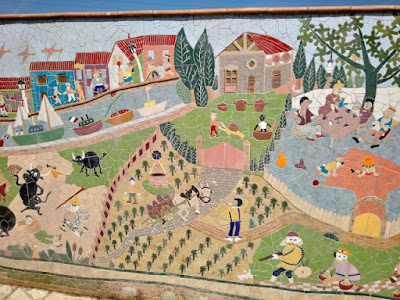 In addition to the large creation that represents the train connection with the surrounding landscape, the art environment also includes smaller, self-contained creations, as shown in the image below.

There are also some sculptures, standing alone or in groups. 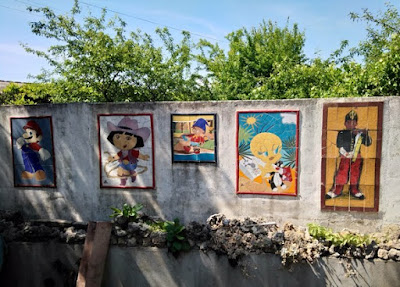