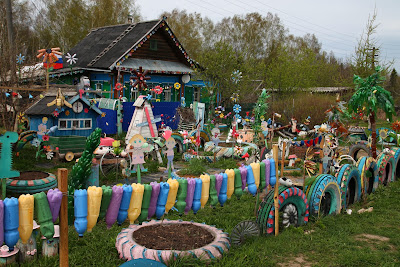 Along the main road from Nolinsk to Kirov in Russia, in the village of Vostrizhan'ye, some 16 km north east of Nolinsk, one comes across an art environment in the capacity of a children's
playground.

The site is close to the road and motorists often stop to take a look, if it does not happen that accompanying children want to get out of the car to visit the site.

Maria Alekseevna Shishkin, the inhabitant of the property where this art environment is situated, was born in 1931 or 1932. In 1959 she settled in Vostrizhan'ye. She got a daughter, Alevtina Gennadyevna Makarova, and a son, Boris Gennadievich Shishkin. The available documentation has no information about a spouse.

When Maria Alekseevna went to live in the village, most of the houses were still inhabited, but gradually the residents moved to neighboring towns and in any case from 2011 she was the only inhabitant. Many houses in the village are now used as a dacha, a holiday home.

When a grandchild was born -at the end of the 1990's or early years of the 21st century- Maria Alekseevna and her son and daughter came up with the idea of making a playground in the garden of Maria's house. That plan took shape and the first attributes were a playhouse, a sandbox and a swing,

But unlike what most families do, it did not stay there. As is usually the case with people who create an art environment, it became a project that would keep the family actively involved for many years..

All kinds of creations were added, such as small animals, cars, planes, mushrooms, fairy-tale characters and the house of Baba Yaga, who is in Slavic mythology a kind of witch. 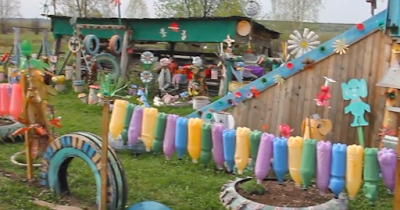 All attributes were made by hand, mostly of surplus material, embellished old car tires, multicolored empty bottles and other wooden and plastic items.

Daughter Alevtina Gennadyevna mostly provided the ideas and son Boris Gennadievich was, especially in the winter months, active in the manufacture of new parts of the site.

Around 2010 the site must have reached the large size as shown in the images. From 2011, the site became known in the region and it got some publicity in regional news media. Boris Gennadievich hasn't experienced this development anymore, he died in 2012.

In its appearance and use of material, this art environment has many similarities with creations known in Russia (and some countries of the former USSR) as ZHEK art, a qualification of creations of surplus material made to provide playground for children and/or decorate spaces located between flats in new urban housing estates. However, unlike art environments created by ordinary people who will be active for many years, sometimes for life, ZHEK art usually involves one-off, short-lived activities of apartment residents.