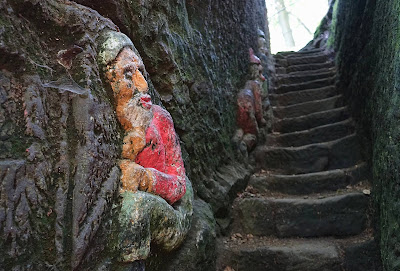 Czech Switzerland, also known as Bohemian Switzerland, is a touristic area in the north west of the Czech Republic, north of Prague,  characterized by a a lot of natural beauty, in particular rocks of sandstone.

A specific touristic spot is the art environment named Trpasličí Skála, an ensemble of sculptures of dwarfs carved into the rocks in a rocky area high above the road between Jetřichovice and Rynartice. 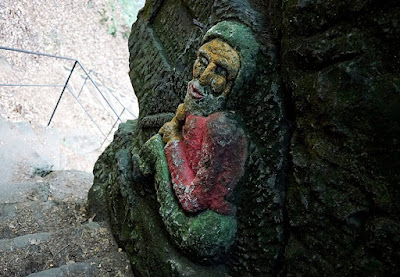 This art environment originated in the 19th century but the available sources on the internet give different information about who created the site and when it was started. Some sources mention that Eduard Vater was the creator, starting the work either in the early 1830's or in 1870, other sources say it was Ernest Wahr, who began in the early 1830's.

Following Andrea Svitáková who in her doctoral dissertation about Stanislav Rolinek (see documentation) sideways mentions the Dwarfs Rock, in all probability a native stone mason named Ernest Wahr in 1833 created the rock sculptures, while a local farmer named Eduard Vater around 1870 has been working with the rock, probably taking care of maintenance and repairing the path that leads to the site, a project that later was completed by his son Ernst, who died in 1882. 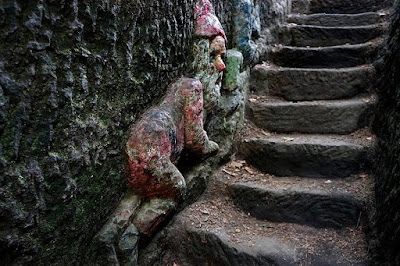 In making his creation, Wahr may have been inspired by a local legend concerning an old poor woman collecting wood in the forest, who got into trouble and was rescued by a number of dwarfs popping up out of nowhere.

The art environment includes a number of separate sculptures in relief of dwarfs in various poses, such as reading a book, crawling up on hands and feet or just sitting. A relation with the fairytale of Snow White and the seven dwarfs seems also obvious.

For decades the site was only known locally. Not much attention was paid to it and the sculptures became covered with moss.

In the 1980s, especially because of increasing tourism, the significance of the site was recognized. In 1989 the sculptures have been cleaned and repainted and the access stage of the site has been improved.

This art environment has now also been included in a list of protected monuments. 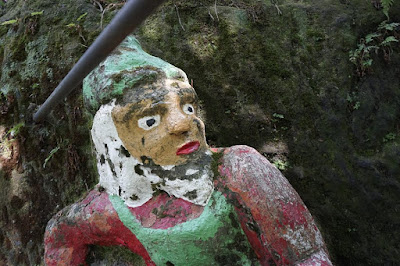 * On the website Tales of the Czech Forests by photographer Vladimir Pomertzeff a beautiful series of photos and an extensive review of the work of Ernest Wahr (look for Vater)
* Documentation of the site as a cultural monument
* More pictures by Pavel Konečný on Facebook
* The internet has a variety of sites about this art environment, which in general refer to the creations from a touristic point of view, for example vybezek and Turistika Ceské Syýcarsko

Ernest Wahr
Dwarfs rock
along the road from Jetřichovice to Rynartice, not far from Rynartice
Děčín district, Czech Republic
the spot is marked with a small sign on a pole along the road
streetview
Posted by henk van es at 7:06 PM