Above picture shows part of a sculpture garden in Kukljica, a small community on the Isle of Ugljan in Croatia. Although an extensive series of photographs was published in 2016 (see documentation), this art environment remained undocumented on the internet until in September 2018 Pavel Konečný for the first time reported about it.

Currently there is no biographic information available about Emilan Grgurić, who created this site, except that he was born in 1919 and passed away in 1997.

Pavel Konečný has reported that Grgurić for some thirty years has been active in transforming house and garden into an art environment, so it might be that Grgurić began in the 1960's when he was in his forties. 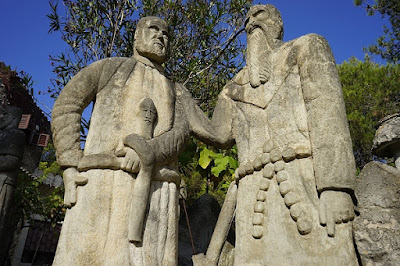 Konečný has also reported that the garden of some 2000 m² includes some 35 statues made from concrete and that the interior walls have been decorated with some 20 large-scale concrete high reliefs. 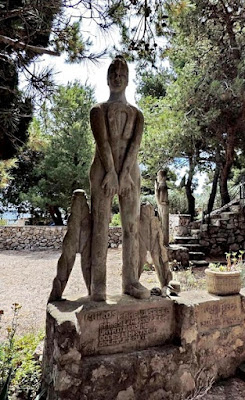 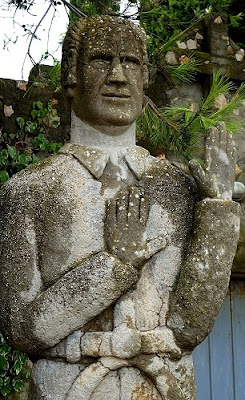 Grgurić's sculptures from concrete (left above a self-portrait), which in general demonstrate a high-quality way of working in a rather classic and realistic style.

The sculpture below with five people (a couple with children?) on an elaborately worked pedestal, shows what performance Grgurić was capable of. The garden has a number of such large constructions provided with sculptures. 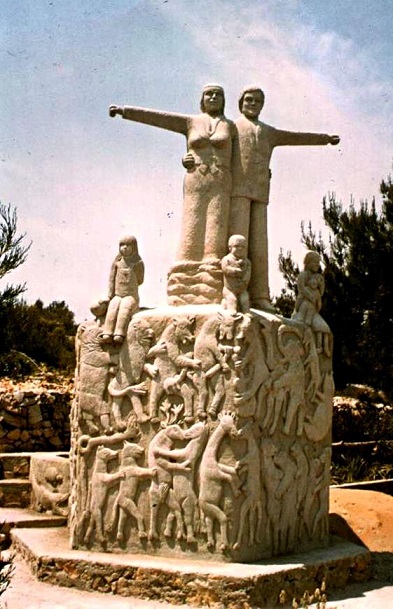 The house on the property, named Villa Katarina after Grgurić's mother, has a ground plan of a four-leaf clover and was designed and built by the artist himself. 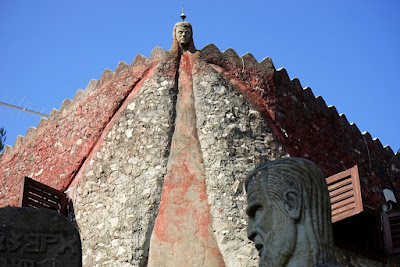 The facade of the house, as in above picture, has a rather striking design. On its top there is a sculpture that represents Grgurić's mother.

One can assume that this house can be classified as a singular architecture.

A large number of wall decorations in the interior

The interior of the Villa includes another part of this art environment, which  consists of some 20 scenes added to the interior walls. 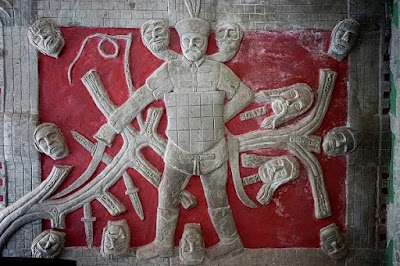 These scenes include for the most part small-scale two- or three-dimensional items of cement, which are placed on walls of a specific deep red, green or blue color. 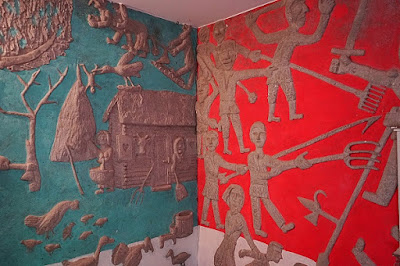 There are scenes in which various people can be seen in all kinds of poses, many in a certain way active mostly without any connection between these activities. These scenes may relate to biblical stories, Croatian history and Greek mythology.

Some walls have inscriptions, such as the one in the picture below, entitled Emilanovih Istina (Emilian's truth). Just to give an impression of Grgurić's thoughts, here is a (provisional) translation of the text, produced with Google Translate:

Other walls as well as a number of statues in the garden also are equipped with inscriptions.

It is be hoped that a documentation and description will be made of the various elements of this art environment, which can be considered as one of the important sites in Europe. Knowing Pavel Konečný he will certainly take action to that end.

Documentation
* as said above with regard to this art environment, the internet until recently had no textual documentation
* however there is a public photo series available, made in 2016 by Darko Grundler
* in September 2018 Konečný reported about his discovery on SPACES website
* early 2019 a pre-publication  of a booklet about the site has become available on the internet
* authored by Dunja Forgač and Pavel Konečný and entitled Eden Park and the statues of Emil Milan Grguriċ (-140 p, A5 format, text in Croatian, English and Czech) this publication has become available in a paper edition, which was officially presented on August 17, 2019 at the occasion of the 100th anniversary of Grgurić's birthday
* and then the Rivista dell’Osservatorio Outsider Art (spring 2019, nr 17) had an article by Konečný entitled Emilan Grgurić e il suo Giardino dell’Eden (p 48-55)
Videos
* in September 2018 Konečný also published two videos on Facebook,  the first one presenting the reliefs on the interior walls.

And a second one presents the sculptures in the garden

this art environment is not open to the public