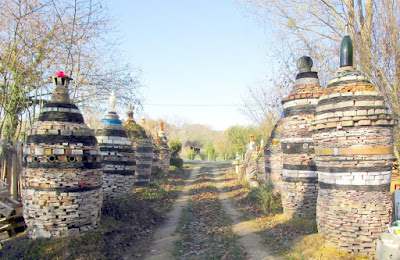 Along the departmental road D 303 near Bessé-sur-Braye in the Sarthe area in France, there is a singular garden filled with a variety of meters-high cylindrical constructions with a domed top, made entirely of stacked stones.

This art environment was created by Michel Rousseau, who was born in 1936 in Savigny-sur-Braye.

After his primary education he for some time was employed as a farm hand until he was called for military service. After this he trained and worked as a mason with the Compagnons du devoir, to finally settle in Bessé-sur-Braye in 1978, where he had job in a factory and where he met his wife.

Retired in 1996 Rousseau increasingly felt the need to fill his days with activities where he could use his manual skills and where he could feel united wit the earth under his feet.

In 2004 he bought a piece of land along the D303 not far from the house where he lives. A pile of building material left on that land inspired him to use this material to build these typical cylindrical dome topped structures. 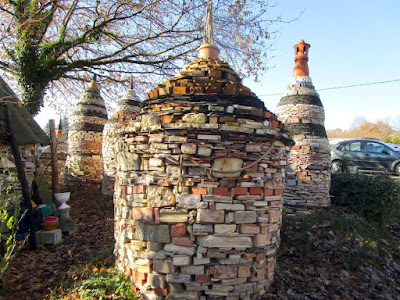 Such buildings do not have their own name in French and may be referred to as cabanes or maisonettes. The site as such does not have its own name either.

When Rousseau was asked about this, he said that the site can be regarded as le reposoir Sarthois (the Sarthois repository). A reposoir is a place where one can rest or make a stop and the term can also indicate a place to temporarily shelter the religious icon which is carried around during a procession.

Since Rousseau decorated one of his constructions with a found street sign with the designation Rue de la pierre perdue (Street of the lost stone), the site is also named after lost stones. 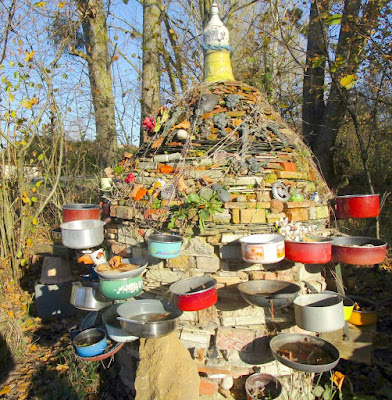 The connotation of Rousseau's art environment is indeed that of stones that, after having been used elsewhere, now have a place where they can stay quietly and from an ecological point of view are not wasted.

This also goes for the various other items Rousseau uses to decorate the structures, such as pots and pans (as in above picture), but also items that have been found or bought in flea markets such as figurines, flower pots, car wheel covers or bottles. 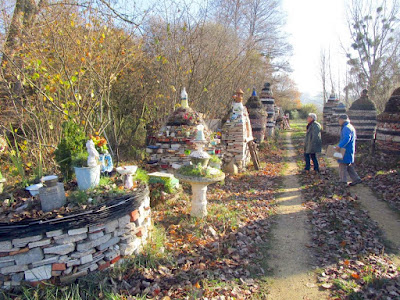 Very characteristic of Rousseau's working method is that he simply stacks the bricks, and so does not use cement or grout to achieve the strength of the structures, the highest of which measure about 4 meters.

In the field of art environments such a method is rather rare. In France Auguste Bourgoin's towers have been constructed in this way and in Italy Manfred Flucke makes structures by stacking stones. 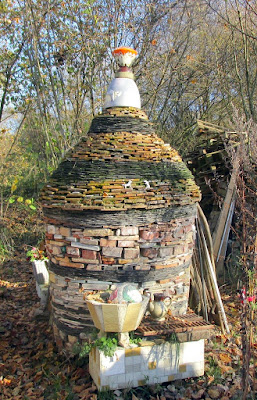 Rousseau who currently (2018) is in his early eighties, is still active in adding new items to the site which meanwhile includes some thirty built structures.