\
In recent years, photos as above with an elderly lady adding blue floral motives to a white wall, have been frequently shared on Facebook and other social media.

The elderly lady, Anežka Kašpárková, has passed away in March 2018. She was in her early 90s.

The white wall is part of an old chapel in the small Czech community of Louka in the South Moravia area of the Czech Republic, where Kašpárková lived. 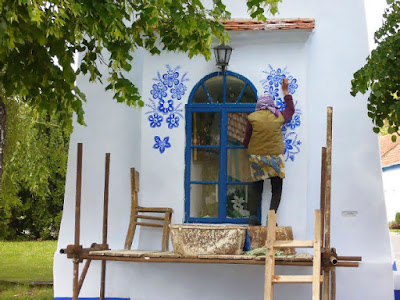 Every two years in May, the walls of the chapel were whitewashed and after this Anežka Kašpárková would begin to apply the decorations, a project that would take some 11 days of work and included working on a scaffold. 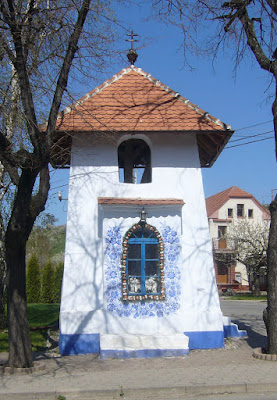 Anežka Kašpárková was born in the late 1929s  Probably all her adult life she has worked in agriculture, cultivating plants, until she retired in the late 1980s.

In those years it was (still) a tradition in the village to decorate white walls of houses with flowery motives, in general using paint in a bright ultramarine color. Usually a small group of self-made artists, mostly women, was available for inhabitants to do the decorations.

Once retired Anežka Kašpárková, instructed by a woman named Maňák who had belonged to the group, became proficient in arranging decorations on houses. She would be active in this field for some thirty years, but at one time she was the only one with this specific competence.

When Anežka Kašpárková had passed away, the mayor of the village expressed the hope that someone would succeed her in taking care of decorating the chapel. And indeed, at the end of April 2018 it has been reported that Marie Jagošová, a family member, was available to take over Anežka Kašpárková's volunteer job.

The picture below shows she has already begun to re-decorate the chapel. 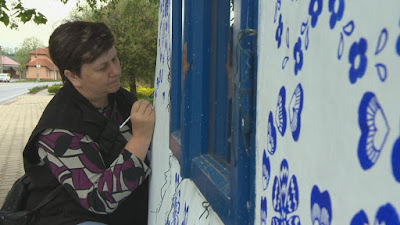 Applying decorations to houses evokes the comparison with similar activities in the Polish village of Zalipi, where a tradition in this respect currently is still widely honored.

Documentation
* Article (undated) with a variety of pictures on website Boredpanda
* Article (april 27, 2018) on the website of regional Czech TV