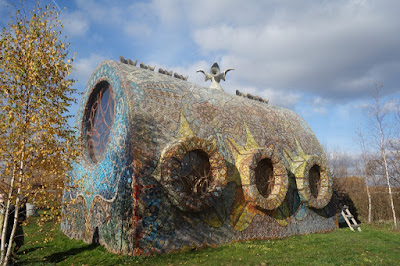 all photos courtesy of Natalya Zolotareva

France may have the Maison Picassiette, a house in Chartres fully decorated with colorful mosaics, recently, a similar structure in terms of mosaic decorations has been completed in Russia, although this structure is completely different in shape and has been produced with contemporary materials. 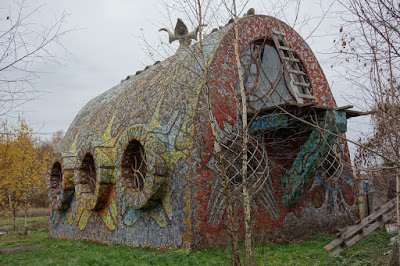 The mosaic house has been created by Egor Zolotarev, who was born June 1, 1986 in Novosibirsk, a large industrial town in the south of Siberian Russia. After his primary education he went to the Novosibirsk Art School. 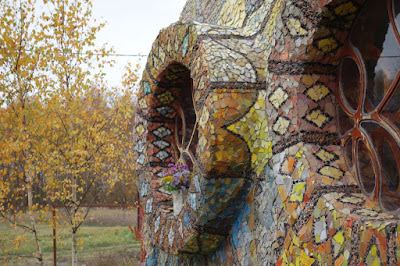 After Zolotarev had graduated in Novosibirsk, he moved west and enrolled at the Moscow Institute of Architecture, where he also graduated, probably in 2008.

In 2011 on a plot of land south east of Moscow in the Voskresensky district that administratively is part of Moscow, with his own hands he began constructing a house, that in the course of the years would become known as the Mosaic house.

In October 2017 the construction work could be considered completed 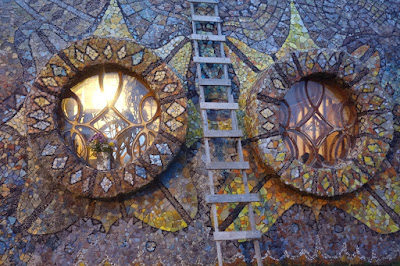 The house, which has a ground floor and an upper floor, has a semi-oval shape, with an exterior plastered with concrete, that rests on a wooden frame reinforced with iron arches.

The pieces of mosaic that cover the entire exterior consist of tiles of artificial stone based on granite, all covered with polymers. This way of processing has the advantage that the mosaics become durable and frost- and water-resistant.

Three similar large round windows, slightly protruding from the wall, mark a long side, while the other long side has the entrance door and two circular windows. The short wall on one side  has a window on the first floor with an outward-reaching balcony. 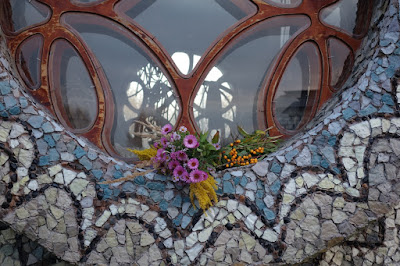 The windows are decorated with curved strands of wire iron in flowing forms. These wire-iron shapes can also be seen in furniture in the interior, such as side tables.

The interior as such also has other eye-catching details such as the staircase to the first floor which does not have a handrail and for the rest is formed by a slightly winding upright of sturdy wire iron, to which cup-shaped steps are attached.

There are also beautiful lamps, with hoods in a stained glass structure with translucent colored glasses encased in compartments within a structure of iron wire

The chimney on top of the house depicts an angel. 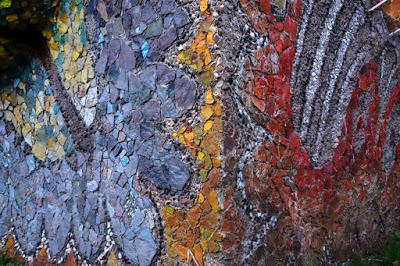 All in all, it can be concluded that this is a beautiful creation of a young Russian artist and architect. It's a singular architecture that also shows the performance of the youngest generation in the Russian field of art environments.

Documentation
* Article (October 2017) in Golos (a Russian social medium) entitled Знакомьтесь - русский Антонио Гауди! (Meet the Russian Antonio Gaudi!)\
* A series of pictures on the VK website show various phases of the building process and details of individual parts of the house. Other pages, here and here, show details of the mosaic decorations.
* The project was also intended to gain experience with regard to the constructional aspects. The Russian ForumHouse website has an extensive discussion about various subjects in this context, such as the use of formwork, the construction of the windows, the supply and drainage of water and the heating
Videos
* Video on Marat Nabi s timeline in Facebook (October 2018)